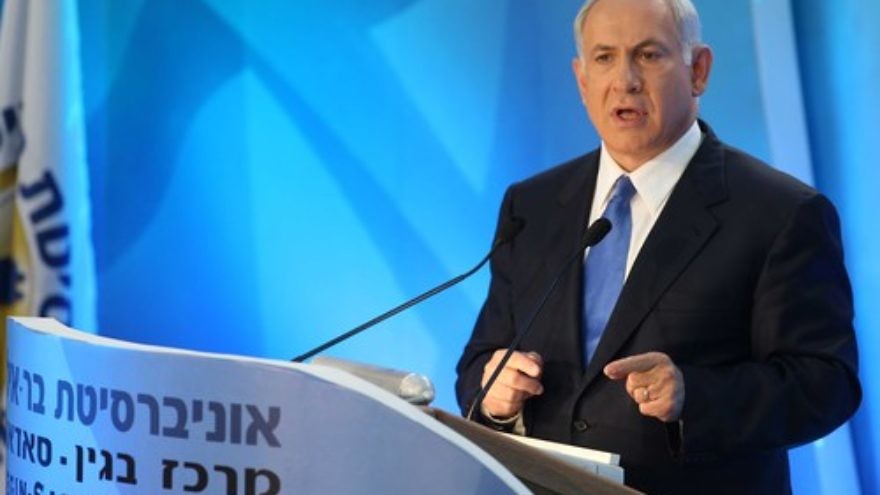 sraeli Prime Minister Benjamin Netanyahu delivers a speech in which he laid out his peace policy at Bar-Ilan University in Ramat Gan, near Tel Aviv, on June 14, 2009. Six year later, that speech has been the source of fresh debate following Netanyahu's pre-election comments that his government would not support the establishment of a Palestinian state. Credit: Michael Kramer/Flash90.
Republish this article
1361 WORDS
Spread the word.
Help JNS grow!
Share now:

(March 23, 2015 / JNS) Fresh off a decisive election victory, Israeli Prime Minister Benjamin Netanyahu finds himself in yet another diplomatic storm with U.S. President Barack Obama over pre-election comments that a Palestinian state would not be established under his watch. Netanyahu later clarified that he wants “a sustainable, peaceful two-state solution.” But were his initial remarks even a policy change in the first place?

Mainstream media outlets reported that Netanyahu’s pre-election comments were a significant departure from a 2009 speech he gave at Bar-Ilan University, in which he publicly supported a two-state solution for the first time. But on March 19, after accusations that he changed his mind on the issue to attract right-wing voters in the election, Netanyahu told NBC News, “I haven’t changed my policy. I never retracted my speech at Bar-Ilan University six years ago calling for a demilitarized Palestinian state that recognizes a Jewish state.”

Within Israel, both supporters and opponents of Netanyahu agree with the prime minister’s self-assessment.

“I think that he still has the same position,” Professor Ephraim Inbar, Director of the Begin-Sadat Center for Strategic Studies at Bar-Ilan University, told JNS.org. “He would be willing to make a territorial compromise. If you remember the 2009 speech, Netanyahu qualified his willingness to accept a Palestinian state that is demilitarized and recognizes Israel as a Jewish state.”

“He still thinks that this is probably the best outcome,” said Inbar. “But at this stage, he doesn’t see that the Palestinians are ready in any way. This is why he made this statement [before the election]. … You have to take a close look at what he said, which is to comment on the likelihood of a two-state solution.”

In one of his last campaign stops before the election, at Har Homa—a Jewish neighborhood with approximately 20,000 residents bordering several Palestinian neighborhoods on the southeast edge of Jerusalem—Netanyahu told the NRG website on March 16 that “anyone who moves to establish a Palestinian state today, and evacuate areas, is giving radical Islam an area from which to attack the State of Israel.”

Netanyahu went on to say, “This is the true reality that has been created in past years. Those that ignore it are burying their heads in the sand. The left does this, buries its head in the sand, time and again.” When asked explicitly if a Palestinian state would not be created under his leadership, Netanyahu replied, “Indeed.”

Those statements jumped to the top of both Israeli and international headlines, giving the strong impression that Netanyahu’s upcoming term would take a harder line on Israeli-Palestinian negotiations than his last two terms. Yet even Netanyahu’s opponents on the left are not up in arms over the policy ramifications of his recent comments.

“At least in his public statements and discourse, this obviously marks a different approach,” Gilead Sher, a senior research fellow and head of the Center for Applied Negotiations at Tel Aviv University’s Institute for National Security Studies (INSS), told JNS.org. “However, I think Netanyahu did very little, if anything, to pursue any kind of path that would enable the creation of a reality of two states for two people during his last two terms.”

In 2009, Netanyahu said at Bar-Ilan University, “In my vision of peace, in this small land of ours, two peoples live freely, side by side, in amity and mutual respect. Each will have its own flag, its own national anthem, its own government. Neither will threaten the security or survival of the other.”

Netanyahu then added some caveats.

“If we receive this guarantee regarding demilitarization and Israel’s security needs, and if the Palestinians recognize Israel as the state of the Jewish people, then we will be ready in a future peace agreement to reach a solution where a demilitarized Palestinian state exists alongside the Jewish state,” he said.

A closer look at the newly dissected and debated 2009 speech indicates a strong hesitancy to rush Israel towards the types of historic compromises the Jewish state would need to make to facilitate the creation of Palestinian state.

“The claim that territorial withdrawals will bring peace with the Palestinians, or at least advance peace, has up till now not stood the test of reality,” Netanyahu said at the time.

Sher, who served as a lead negotiator in talks with the Palestinians under former prime minister Ehud Barak at Camp David and in several other rounds of both known and covert negotiations, believes Netanyahu’s 2009 speech never intended to lay the groundwork for a realistic two-state solution.

“Basically what he did in practice is delegitimize the two-state solution, delegitimize and undermine the negotiations process, and that is the subtext of his Bar-Ilan speech—and the subtext is obviously what became the text of his speech prior to the recent election,” Sher told JNS.org.

Days after his election win, the mainstream media again cast Netanyahu as a “flip flopper” when he reaffirmed his support for a two-state solution. The prime minister, however, told NBC News that what had changed were not his views, but “the reality” on the ground.

“The Palestinian leader (Mahmoud Abbas) refuses to recognize the Jewish state and has made a pact with Hamas that calls for the destruction of the Jewish state, and every territory that is vacated today in the Middle East is taken up by Islamist forces,” Netanyahu said. “We want that to change so that we can realize a vision of real, sustained peace. I don’t want a one-state solution. I want a sustainable, peaceful two-state solution, but for that, circumstances have to change.”

The question that remains both within Israel and abroad relates to Netanyahu’s caveats for a two-state solution—Palestinian demilitarization and recognition of Israel as a Jewish state. Are those caveats the honest outcomes of a well-intentioned peace accord, or is likely Palestinian rejection of those conditions meant to serve as the basis for the prime minister’s never signing an accord in the first place?

“I think that eventually, if negotiations are indeed resumed, I believe there is no other way but for the respective parties to each acknowledge the right of self-determination of the other as the national homeland of its people,” INSS fellow Sher told JNS.org. “So this is obviously one of the outcomes of a bilateral negotiations process.”

Sher—a proponent of restarting negotiations with the Palestinians and even making unilateral territorial withdrawals in the absence of a peace accord—said, “One of the basic core parameters is Palestine being a demilitarized state. However, having said all that, I see very long odds for bilateral negotiations to resume under a government led by Prime Minister Netanyahu.”

The Begin-Sadat Center’s Inbar concurs with Sher’s assessment, but he places the blame for the failure to negotiate squarely on the Palestinians.

“The Palestinian national movement is dysfunctional, and I don’t think it is ready for historic consequences with the Zionist movement. … The unwillingness to recognize Israel as a Jewish state is what keeps the Palestinians away from negotiations,” Inbar said.

Moving forward, the perception that both the Israelis and Palestinians are currently disinterested in any kind of peace arrangement appears to anger the White House. Obama told The Huffington Post in comments published March 21 that Netanyahu’s pre-election comments on a Palestinian state mean that “we’ve got to evaluate what other options are available to make sure that we don’t see a chaotic situation in the region.”

“[The Obama administration is] impatient with Netanyahu, which I do not totally understand,” Inbar told JNS.org. “He did not say that he is against a two-state solution. He said that at this stage it is not likely. Anybody who looks at how the Palestinians are behaving will agree.”

Responding to criticism on Fox News, Netanyahu said, “You can’t force the people of Israel, who’ve just elected me by a wide margin, to bring them peace and security, to secure the State of Israel, to accept terms that would endanger the very survival of the State of Israel. I don’t think that’s the direction of American policy. I hope it’s not.”