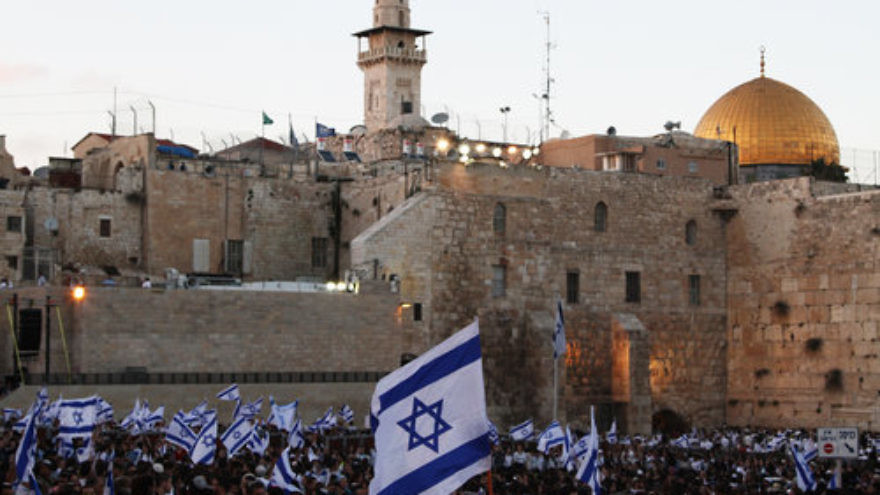 Israelis celebrate the 50th anniversary of Jerusalem’s reunification May 23-24. Leading up to the holy city’s semi-centennial milestone, here are 50 facts highlighting the rich tapestry of Israel’s capital:

1. Jerusalem Day is an Israeli national holiday commemorating the reunification of Jerusalem in the 1967 Six-Day War.

2. During the Jordanian occupation of Jerusalem, Jews were not allowed to access their holy sites, including the Western Wall.

3. Jerusalem has been attacked 52 times, captured and recaptured 44 times, besieged 23 times and destroyed twice over the course of 3,000 years.

4. Israel is the only country to enter the 21st century with a net gain in its number of trees, and you can enjoy them over a picnic or barbecue in the Jerusalem Forest.

5. The name “Jerusalem” most likely comes from “Urusalim,” a word of Semitic origin meaning “Foundation of Shalem (wholeness)” or “Foundation of God.”

6. Jerusalem has more synagogues per capita than any city in the world.

7. Jerusalem is the only city in which some 15 different Christian communities live alongside one another, according to the Jerusalem Institute for Israel Studies.

8. Jerusalem is considered the eternal capital of the Jewish people.

9. Jerusalem is the third-holiest city in Islam, outside of Mecca and Medina, both in Saudi Arabia.

10. Jerusalem is mentioned more than 600 times in the Hebrew Bible, but not once in Islam’s Quran.

11. In the Middle Ages, Jews were banned from Jerusalem by Christians, and Muslims later lifted the ban.

12. There are more than 70 different Hebrew names for Jerusalem in Jewish scripture.

13. Jerusalem is statistically safer than nearly most large U.S. cities and many major cities elsewhere in the world.

17. Under Israeli rule, Jews are not allowed to pray on the Temple Mount, their religion’s holiest site.

18. The Old City of Jerusalem is divided into the Muslim Quarter, Christian Quarter, Jewish Quarter and Armenian Quarter.

19. The Dome of the Rock is not a mosque, but an Islamic shrine located on the Temple Mount.

20. Although all branches of the Israeli government are headquartered in Jerusalem, the city is not home to any foreign embassies. President Donald Trump is considering moving the U.S. Embassy in Israel from Tel Aviv to Jerusalem.

21. The 2.5-mile-long walls around Jerusalem’s Old City were built in 1536 by Suleiman the Magnificent.

22. Jerusalem has more than 2,000 archaeological sites.

23. Archaeology proves Jews have lived in Jerusalem since 3000 B.C.

24. Archaeologists have found 3,800-year-old pottery in the City of David.

25. Jerusalem has separate educational and religious systems for its Christian, Muslim and Jewish populations.

26. Jerusalem has one of the highest-rated nightclubs in the world: Haoman 17.

27. There are 26 wineries in Jerusalem, according to United with Israel.

29. The actress Natalie Portman was born in Jerusalem.

30. Jerusalem is Israel’s largest city in both landmass and population.

34. Jerusalem has had a Jewish demographic majority since 1864.

35. Jerusalem represents about 0.001 percent of the landmass of the Middle East.

37. Eleven percent of Jerusalem homeowners are foreign residents, compared to 3 percent in Israel at large.

40. Jerusalem is home to more than 400 high-tech companies.

42. Fourteen percent of the Jerusalem workforce is self-employed.

46. The Jerusalem-founded company Mobileye, bought by Intel this year, was part of the largest-ever acquisition of an Israeli technology company.

47. This year, a noticeably high proportion (almost 50 percent) of newcomers to Jerusalem were 20-34 years old.

48. Of those who move to Jerusalem, 38 percent come from Beit Shemesh and Tel Aviv.

49. Brazilian immigration to Jerusalem tripled during the past year.

50. The new immigrant population of Jerusalem—those arriving in the past 20 years—represents about 13 percent of the city’s Jewish population.

Eliana Rudee is a fellow with the news and public policy group Haym Salomon Center. Her bylines have been featured in USA Today, New York Daily News, Forbes and The Hill.