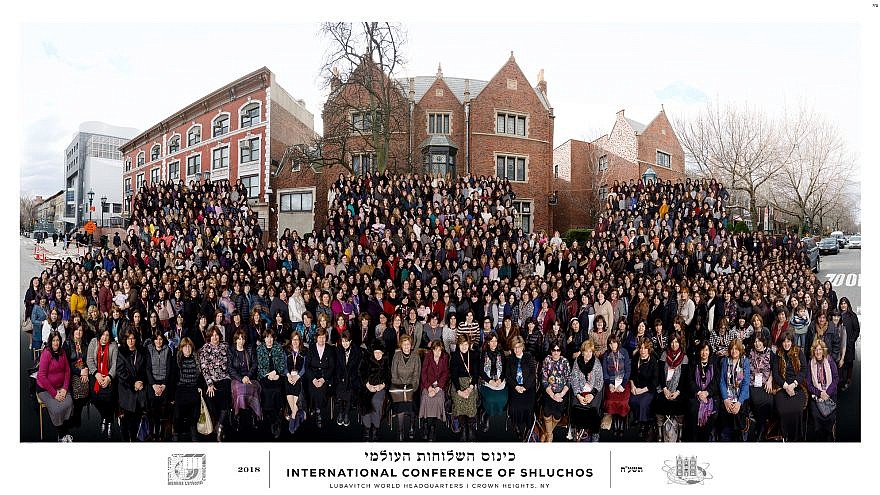 All the participants of the 2018 International Conference of Shluchos, at Chabad-Lubavitch World Headquarters in the Crown Heights neighborhood of Brooklyn, N.Y. Photo by Chavi Konikov.
Republish this article
837 WORDS
Spread the word.
Help JNS grow!
Share now:

(November 20, 2022 / chabad.org) Arriving in New York from the four corners of the earth in a Hakhel year devoted to gatherings large and small, 6,500 Chabad-Lubavitch emissaries (shluchim), and their guests from all 50 states and more than 100 nations and territories around the world are immersed this week in workshops, special events and personal encounters at the annual International Conference of Chabad-Lubavitch Emissaries.

The term “Hakhel” refers to the biblical commandment for all Israelite men, women and children to assemble and hear the reading of the Torah by the king of Israel once every seven years.

Following a two-year absence for many due to the coronavirus pandemic, the nearly week-long event is giving most of Chabad’s 5,646 rabbis the opportunity to meet with friends and colleagues whom they have not seen for years. They are welcoming hundreds of young rabbis who have joined their ranks over the past year, including those from the 120 Chabads established in the past 12 months, on average one every three days.

According to the 2020 study of Jewish Americans by the Pew Research Center, two-in-five Jewish adults (38% or 2.2 million people) engage with Chabad each year, a number that has been growing annually for decades. In 2021, a survey of synagogues in America found that the number of Chabad congregations has grown by 199% since 2001 and today they comprise the largest network of synagogues.

During the COVID pandemic, Chabad-Lubavitch centers in the United States launched more than $100 million in capital campaigns, pushing forward with hundreds of new centers and expanding or renovating existing ones. This rapid growth has presented countless opportunities and challenges for the emissaries, and they will be sharing their experiences and strategies with one another in workshops, meetings and one-on-one consultations.

Study, prayer and workshops from morning to night

Three days of Torah study, prayer and workshops from morning to night will be held in various languages, including English, Hebrew, French, Spanish, Russian and Yiddish, and will focus on education, adult-learning programs, creating unity in an increasingly divisive environment, and counseling people in times of crisis. There are special tracks for campus rabbis and rabbis serving young adult and teen demographics, fast-growing areas in Chabad.

This year’s conference carries added significance as Jewish communities worldwide celebrate the year of Hakhel, a time to promote Jewish unity and learning. Throughout the year, synagogues and Jewish organizations are hosting communal gatherings for men, women and children dedicated to encouraging the observance and study of Torah.

Reflection and requests at the Ohel

A focal point of their time in New York will be on Friday morning, when participants will visit the Ohel, the resting place of the Lubavitcher Rebbe—Rabbi Menachem M. Schneerson—and his father-in-law, the sixth Rebbe, Rabbi Yosef Yitzchak Schneersohn. A general petition will be read at the resting place, and emissaries will bring with them countless personal letters and prayers from those back home requesting blessings from on high that they will deliver to the Rebbe’s resting place.

On Shabbat, the emissaries will spend time praying and studying in the Crown Heights neighborhood of Brooklyn, where the headquarters of the Chabad-Lubavitch movement is located. They will also participate in farbrengens (informal Chassidic gatherings), where they will sing and share Torah thoughts, inspiration and stories.

On Sunday morning the rabbis will gather in front of Chabad-Lubavitch World Headquarters at 770 Eastern Parkway for their annual group photo.

The culmination of the activity-filled weekend is a Sunday-night gala dinner for 6,500 emissaries and guests, including dignitaries, communal and lay leaders, and supporters from communities around the world.

This year’s banquet will be highlighted by a historic ceremony in which 36 Torah scrolls will be completed simultaneously. A plan to write the dozens of new Torah scrolls for communities that were using borrowed Torahs and did not have one of their own was announced at last year’s conference by Rabbi Moshe Kotlarsky, the vice chairman of Merkos L’Inyonei Chinuch—the educational arm of Chabad-Lubavitch. It is the first time to anyone’s knowledge that so many Torahs have been completed at the same time.

Rabbi David Lau, the Ashkenazi Chief Rabbi of Israel, and Rabbi Sholom Gottlieb of Nikolayev, Ukraine, will open the gathering with the recitation of Psalms followed by a dvar Torah talk from Rabbi Avraham Feldman of Reykjavik, Iceland. Seven emissaries will then give reports on their activities during the seven decades from the 1950s to the present.

Emissaries are eagerly anticipating the keynote address from philanthropist and businessman George Rohr, who has been at the heart of Chabad’s growth for decades, and following the annual roll call, the event will conclude with the completion of the Torah scrolls and a rousing celebration with spirited Chassidic dancing.

In the days following the conference, some emissaries will remain in New York for meetings, but all will eventually return home—whether to small enclaves, remote locations or teeming metropolitan centers—with renewed energy and inspiration to spread the Rebbe’s message of the beauty, joy and importance of Jewish study and practice.