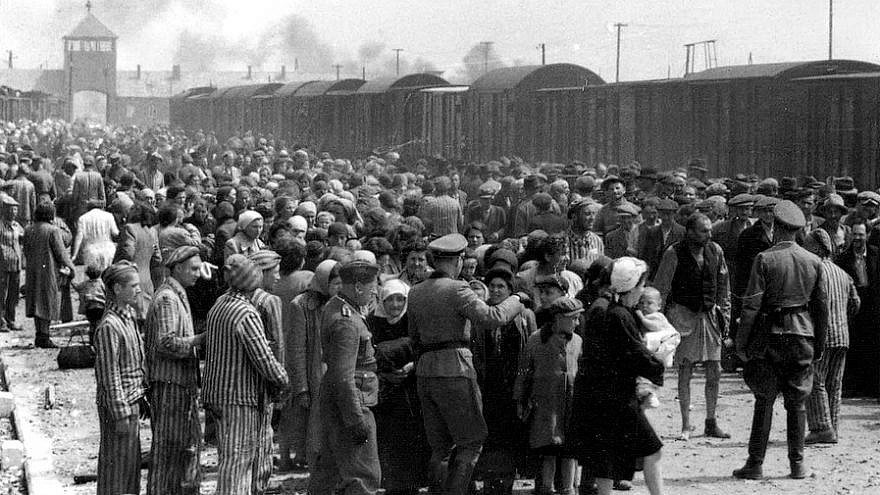 “Selection” of Hungarian Jews on the ramp at Auschwitz II-Birkenau in German-occupied Poland, May-June 1944, during the final phase of the Holocaust. Jews were either sent to work or to the gas chamber. Credit: Yad Vashem Photo Archives, Jerusalem.
Spread the word.
Help JNS grow!
Share now:

(August 5, 2019 / JNS) A bipartisan group of 88 U.S. senators signed a letter on Monday to U.S. Secretary of State Mike Pompeo, asking him to “act boldly and with urgency to help Poland resolve this issue comprehensively” of compensating Holocaust victims whose property was stolen by German Nazis.

Crediting Pompeo with raising the issue in a statement in February about the matter, the senators said they were “deeply troubled” with Polish Prime Minister Mateusz Morawiecki responding that the issue has been “resolved.”

“Now is the time, while the last Holocaust survivors are still alive, to back up our words with meaningful action,” wrote the senators. “We encourage you to pursue bold initiatives to help Poland to resolve this issue as quickly as possible.”

JNS has reached out to those senators for comment.

The letter came less than a month ahead of U.S. President Donald Trump’s planned visit to Poland on Sept. 1 to mark the 80th anniversary of the beginning of World War II. It would be Trump’s second visit to Poland since July 2017.

Poland is the only affected nation that doesn’t have legislation dealing with confiscated restitution from the last century. In March 2018, 59 U.S. senators called on Poland to pass and enact such a law.

In May, Morawiecki said that were Poland to pay restitution for those whose property was stolen in the Holocaust, it would violate “international law and would also be a posthumous victory for Hitler;” therefore, “something like this will never happen.”

Eric Gallagher, the Washington representative of the World Jewish Restoration Organization, told Haaretz that the letter “demonstrates once again that the United States Congress has not forgotten about Holocaust survivors and remains steadfast in pursuing justice for them.”

Approximately 90 percent of Poland’s Jews were killed in the Holocaust.