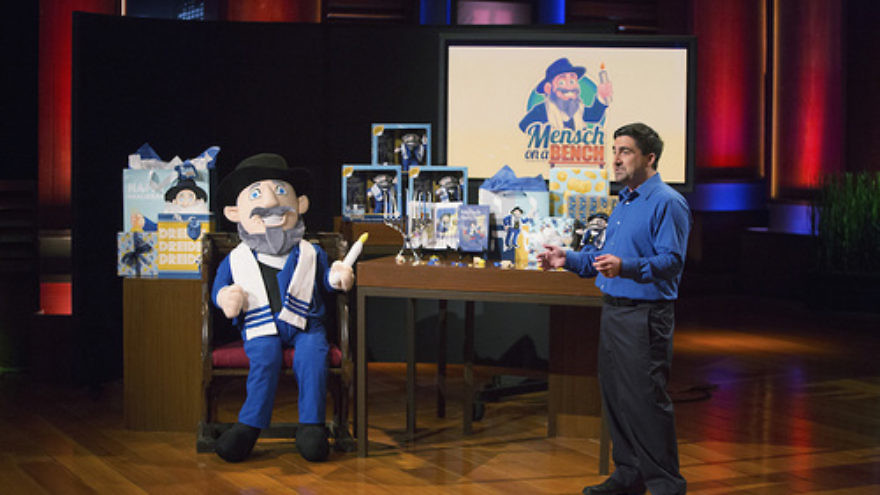 Leading up to Hanukkah 2014, former Hasbro toy and game company employee Neal Hoffman conducted a successful Kickstarter online crowdfunding campaign that helped him get out his new product, “Mensch on a Bench,” in time for the holiday. At the same time, the Cincinnati, Ohio, resident was readying for an even bigger stage: national television.

Hoffman’s toy-and-book set based on the story of the character “Moshe the Mensch” sold more than 50,000 units, generating close to $1 million in revenue. The product—a Jewish take on the famed “Elf on a Shelf” Christmas toy—has distribution in retailers including Target, Michaels, Bed Bath & Beyond, Toys “R” Us, Barnes & Noble, Hallmark, and others. For avid television viewers, that kind of success can only mean one thing: an appearance on the ABC network’s popular “Shark Tank” program, in which entrepreneur contestants seek funding for their ventures from a panel of high-profile investors.

After months of preparation, Hoffman and Moshe the Mensch ventured to Los Angeles to tape the “Shark Tank” segment, which aired Dec. 12.

“I remember smiling ear to ear walking down the hallway and thinking to myself, ‘I did it,’” Hoffman tells JNS.org regarding his entrance into the “Shark Tank” set. “I was starstruck when I walked in the room, but got over it quickly when I started my presentation.”

Hoffman has common ground with one of the “sharks,” investor Mark Cuban, in that both are part of interfaith marriages—something Hoffman thought might give him an inside track to scoring a deal with Cuban, the owner of the National Basketball Association’s Dallas Mavericks. Cuban not only passed on the opportunity, but also teased the product. Yet Hoffman was undeterred and solicited the interest of three other sharks.

“I feel like [Cuban] thought I was on the show as a joke,” Hoffman says, “until I started talking about my Hasbro background and our sales to date. Then he knew we were serious.”

After being offered $150,000 for a 30-percent stake in his company by sharks Lori Greiner and Robert Herjavec—a tandem that outbid Barbara Corcoran, who despite not securing a deal offered advice on the design of Hoffman’s product—Hoffman went from part-time dreamer to full-time Mensch on a Bench employee.

“I am a huge fan of the show. I still cannot believe that it happened,” Hoffman says of his appearance on “Shark Tank.”

The idea for Mensch on a Bench, Hoffman recalls, came while he was “walking through the store with my son and he asked for an Elf on a Shelf.” Since he is married to a Catholic woman but is raising his children Jewish, Hoffman was concerned that his children and many others in the same situation would not have a religiously relevant holiday toy like the elf enjoyed by their Christian friends.

“I really wanted something to reinforce Judaism,” he says.

Though the Mensch started as merely a laughing reply to his son Jacob’s request, Hoffman soon began to think of possibilities for making Moshe come to life.

“First came the name [Moshe the Mensch], which I fell in love with,” Hoffman says. “I was really passionate about the idea.”

After writing the story of Moshe, Hoffman first read the tale to Jacob. Once securing his son’s approval, he began designing the prototype of Moshe.

“Originally I was not sure if this was something just for the Hoffman house,” admits the entrepreneur, “or if it was something I wanted to launch mainstream.”

As more people began to hear and embrace Moshe’s story, Hoffman was emboldened and began to reach out further.

“We funded the original project via Kickstarter to test out the idea,” he says, noting that many of the donations came in Jewishly appropriate denominations of $18. “My mom loved the idea and my wife loved the idea, but I needed someone to love the idea who did not love me. Kickstarter allowed us to raise the funds to make the first thousand [Mensches], illustrate and produce the book, and not dip too deep into the kids’ college funds to launch our business.”

Each Mensch on a Bench set includes a full-color hardcover book that tells the story of Moshe, a “do-gooder” (as Hoffman puts it) who demonstrates the way to keep Hanukkah and the rest of the year warm and bright through good deeds. Each set also includes Moshe, a stuffed toy, and a on which he can sit while he watches over the family that owns him.

Due to some production issues, the first Mensches did not arrive at Hoffman’s house until one week before Hanukkah 2014. “We stayed up all night packing them up and shipping them out to make sure everyone got them on time,” he says, citing what he believes is a modern-day Hanukkah miracle.

Hoffman appeared on “The Today Show” and “The View”—and the product’s first batch sold out in just 10 days.

“We knew within a week of launching that we had a hit on our hands,” Hoffman says. “From there, we showed it to retailers and they all said they wanted the Mensch.”

Not surprisingly, the product’s status has been further elevated by the “Shark Tank” appearance. Since the episode’s airing, Hoffmann says that “our awareness levels have gone through the roof.”

“We have gone from an unknown to a household name in 24 months, which is every toymaker’s dream,” he says. “I have two great partners in [sharks] Lori and Robert, and we talk on a regular basis. They love hearing about the progress of the brand and are encouraging me as we try to expand from a toy into a brand in 2015.”