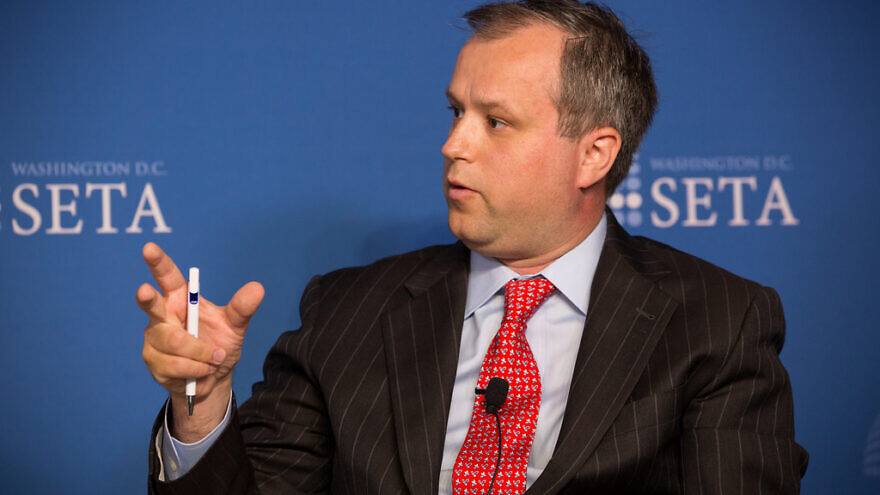 Now, Sigurd Neubauer, 41, is shifting focus just a bit. He just launched Man & Culture, an online lifestyle magazine with the goal of “providing the sophisticated American with a one-stop online destination for high culture, including a special emphasis on fitness, sports, fashion and more.”

Neubauer, an Orthodox Jew who speaks multiple languages, said he hopes that the magazine will distinguish itself by providing a platform free of culture wars and politicized content. The debut edition includes a feature on former Israeli Army Orchestra singer Chen Reiss—now a celebrated soloist at Europe’s top opera houses—along with stories on how the pandemic changed America’s fitness routines, a history of yodeling, Islamic art and the revival of classic American architecture, and a tribute to Roger Federer, who Neubauer dubs “the ultimate gentleman of sports.”

“I succeeded in the fields of Gulf analysis and relations, and I thought those successes I had achieved could be leveraged to provide a positive alternative discourse in the U.S. The mission of the magazine is to provide beauty in culture and a space free of the political language and anger we see playing out, including in media,” Neubauer told JNS. “I want to celebrate things that bind us together, what it means to work hard and achieve success over time, and try to create an alternative to so much of the noise out there.”

A native of Lillehammer, Norway, Neubauer attended Yeshiva University in New York City, where he earned degrees in Jewish history, political science and French literature. He moved to Washington, spending almost a decade working for defense contractor SOS International LLC, supporting U.S. government clients in Iraq and Afghanistan, while becoming a think-tank expert and commentator on the side. In 2009, he traveled to Manama, Bahrain, for a conference at the invitation of Houda Nanoo, then Bahrain’s ambassador to the United States and the first Jew to serve as an Arab Middle East diplomat. Neubauer then traveled to Oman, which became his area of expertise.

His work eventually led him to stints at the Arab Gulf States Institute and the Gulf International Forum, along with roles as a columnist for the Dubai-based Al Arabiya. After almost a decade in his defense consultancy work, he left to write Old Struggles, New Alliances on the secret diplomacy between Israel and the Gulf states.

“One thing I learned is that Israel is a consistent foreign-policy actor. It wants good relations with all states. There are shifting sands in the Arab world, like with Turkey, which will be your friend on Monday and your enemy on Tuesday. Israel doesn’t work that way,” said Neubauer.

‘Culture is spiritual and transcendental’

After the monumental recent events in the Gulf region, Neubauer thought it was time to make some major changes of his own.

“I was successful because I always took a cautious tone, held an even temperature and wanted to stake the path forward, rather than fight. I thought these skills could be applied to what is happening in the U.S. I understand Democratic and Republican narratives, but there are things that are bigger than political points. There are principles that bind us together,” he said.

Launched to coincide with Neubauer’s 20th anniversary in the United States, he felt such gratitude for the experiences and professional success he’s had, and that instead of complaining, he wanted to do something to pay tribute to America. He told JNS that the reception to his magazine’s launch has been overwhelmingly positive, and while he has hired people on the technical side to assist with it, the content is produced completely by him, as he holds discussions with advertisers and venture capitalists in an effort to expand on the current product.

“Culture is spiritual and transcendental,” he said. “When you close your eyes and listen to a Beethoven symphony, it’s an out-of-body experience. When you play a game of tennis or football, it’s something that resonates. But when you weaponize culture and music, when you read about it and it is politicized, it chips away at the value of it.”

He continued, saying “we entered a highly competitive media market because we believe that providing content free of inflammatory language and rhetoric provides an opening as Americans are exhausted from political and ideological divisions.”

Neubauer adds that he hopes to incorporate his knowledge and experience with the Gulf into the magazine at some point, possibly with a focus on tourism.

“Right now,” he said, “I want to cover jazz and big-band music.”