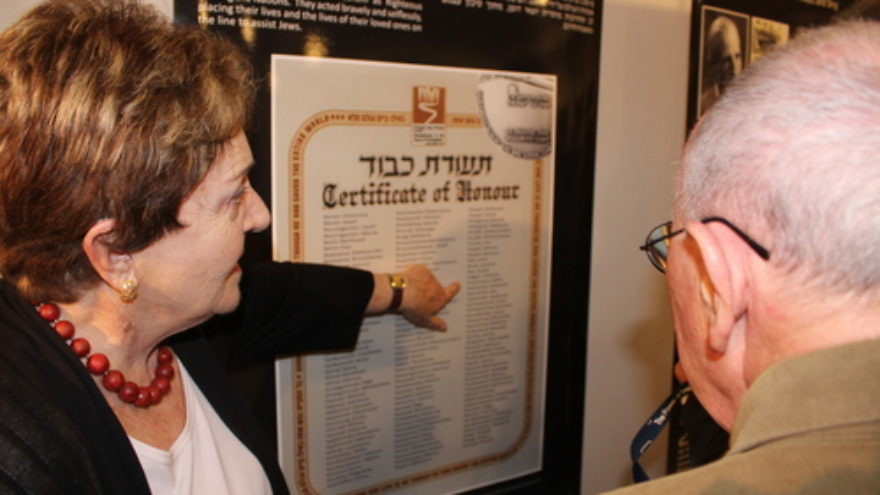 Standing in front of a poster at the Tel Aviv's Beit Hatfutsot museum with a list of individuals who had saved Jews in Drohobych-Boryslav during the Holocaust, Irena Wysoki points to the names “Jan Sawiński” and “Zofia Sawińska,” Polish farmers who hid Wysoki and her brother. Photo by Eitan Arom.
Republish this article
865 WORDS
Spread the word.
Help JNS grow!
Share now:

(March 27, 2016 / JNS) The Eastern European countryside is haunted by the ghosts of countless shtetls whose surviving residents have long since scattered. For the most part, those landsmen and their descendants tend to remain scattered.

But on the evening of March 22 at Beit Hatfutsot, the Museum of the Jewish People in Tel Aviv, hundreds of Holocaust survivors and their descendants from one particular locale, Drohobych-Boryslav, gathered to connect with their shared history.

“The story of this exhibition is our story,” said Daniela Mavor, the gathering’s principal organizer, standing in front of a semicircle of vertical black banners, each displaying a snippet of the town’s Jewish past.

In lieu of the town’s annual gathering of survivors and descendants, normally a no-frills event drawing a small number of participants, the exhibition doubled as a chance to reconnect with old friends and trace out long-forgotten branches of family trees.

The city’s past is a unique and cosmopolitan one. At the turn of the 20th century, Drohobych-Boryslav, an adjacent pair of towns often lumped together and now located in western Ukraine, saw an unparalleled petroleum boom, creating a class of ultra-rich oil barons including many Jews.

The Jewish population quickly became integral to the drilling industry for their management skills and technical know-how, so much so that when the Nazis banned Jews from the oil fields, production faltered and the prohibition was lifted. Many would ultimately survive because they were integral to the Nazi war effort.

But for many of those who attended the exhibit, the broad strokes of history were merely background for their personal stories.

Standing in front of a poster at Beit Hatfutsot with a list of individuals who had saved Jews in Drohobych-Boryslav, Irena Wysoki pointed to the names “Jan Sawiński” and “Zofia Sawińska.” The couple, a pair of Polish farmers, hid Wysoki and her brother during the war.

Ever since, she’s kept in touch with the couple’s children and provided them with financial assistance.

“We didn’t have anything…we want to help them, because the situation is not good in Ukraine,” she said.

For Wysoki, who lives in Holon, just south of Tel Aviv, and said she’s wealthy enough to help without much difficulty, pitching in here and there is the least she can do.

After Mavor’s dedication, the survivors and their families gathered in the museum’s auditorium, where a candle-lighting ceremony for the city’s martyrs was followed by a series of videos and a speaking panel about Drohobych-Boryslav residents who risked their lives to save Jews.

Speaking on stage, survivor Yehuda Bronicki turned to Cornelia Schmalz-Jacobsen, whose father, Wermacht Major Eberhard Helmrich, saved hundreds of Jews by putting them to work on an agricultural camp he operated on behalf of the German army.

“They had a real alternative: do nothing,” Bronicki said of Helmrich and his wife, Schmalz-Jacobsen’s mother.

“I owe my life to your father,” he added.

Asked why her parents sheltered Jews despite great personal risk—Schmalz-Jacobsen said her father estimated his chance of survival at 5 percent—she put it up to basic human decency.

“The simple answer is, I suppose, they were just simple, decent people and they did what they thought had to be done,” she said.

The event originally grew out of an effort to install a plaque in Drohobych-Boryslav for Berthold Beitz, a German industrialist who saved hundreds of Jews by claiming—often falsely—that they were essential to his oil operations there.

“We just took it from there and extended it,” Mavor said.

Survivor Shuly Alexander said she normally doesn’t attend the annual gatherings, despite cajoling from her children.

“For them it was history,” she said. “For me it’s bad memories.”

But this year, she came to see a tribute to Izydor Wołosiański and Jarosława Wołosiańska, who hid her along with 38 other people in a cellar under their workshop during the Holocaust.

After a video about the couple, their daughter, Ana Pilko, participated in a panel onstage.

“How could they not help?” Pilko said, explaining her parents’ motives.

The exhibit first opened in Cologne, Germany on Feb. 18, as a joint project of Action Reconciliation Service for Peace, a German organization that promotes intercultural understanding, and Mavor’s group, the Organization of Drohobycz, Boryslaw and Vicinity Survivors and Descendants.

But the research that went into the exhibit was a civilian effort led by June Dilevsky, an economic consultant in Jerusalem who perused diaries, survivor testimonies, and scholarly reports to piece together the posters.

Dilevsky said that before beginning the research, she had very little interest in the history of Drohobych-Boryslav, where her father grew up. During long silences by her father’s bedside near the end of his life, she failed to ask him about his childhood—a fact she now regrets.

But once she began researching her heritage, she became fascinated by the multitude of intricate and interlocking stories.

“There’s a certain compelling element about it, as messed up as it is,” she said. “And it’s tragically messed up.”