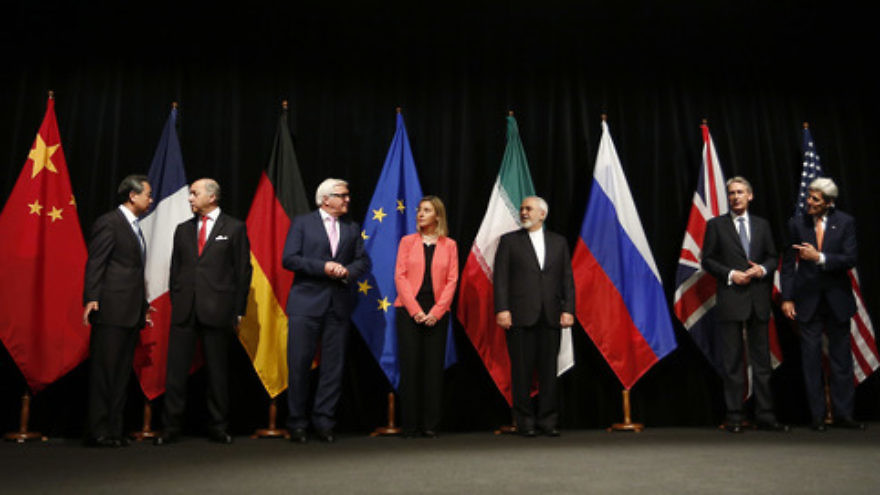 (July 7, 2016 / JNS) The nuclear agreement signed on July 14, 2015, between Iran and the P5+1 powers—the United States, the United Kingdom, France, China, Russia, and Germany—was a watershed event in international diplomacy and a key moment for U.S. President Barack Obama, who staked his legacy on the deal’s success. One year later, should world nations, and perhaps most notably Israel, still view the Islamic Republic as a nuclear threat?

“In terms of compliance with the deal itself, I think it is going very well,” Dalia Dassa Kaye, director of the Center for Middle East Public Policy at the Rand Corporation, told JNS.org. “Basically, the bargain was Iran rolling back of key elements of the nuclear program in exchange for sanctions relief—those two key aspects of the deal have been met.”

In May, U.S. Ambassador and Lead Coordinator for Iran Nuclear Implementation Stephen Mull said in testimony to the U.S. Senate that the Iran nuclear deal “has been implemented by all participants.”

According to Mull, Iran has completed dozens of specific actions to “limit, freeze, or roll back its nuclear program and subject it to greater transparency by the International Atomic Energy Agency.”

This includes Iran disconnecting two-thirds of its installed centrifuge capacity, terminating uranium enrichment at its secretive Fordow nuclear facility, reducing its stockpile of low-enriched uranium by 98 percent, and filling the core of its Arak heavy water reactor with concrete.

As such, Mull concluded that these actions have increased Iran’s so-called “breakout time”—the time it would take to produce enough fissile material for a nuclear weapon—from two or three months to at least a year.

Ilan Berman, vice president of the American Foreign Policy Council think tank, told JNS.org that while the deal is “holding for now,” the Iranians “remain within the letter of the agreement but not the spirit of it.”

“They have been a little more transparent in their nuclear processes, but it has not fundamentally changed Iranian behavior,” Berman said, alluding to Iran’s continued military buildup; support for terrorist organizations; and hostility towards Israel, the U.S., and America’s Arab allies.

Many policymakers and analysts also remain concerned about the economic ramifications of the nuclear deal. One of the principle concerns had been the estimated $100-$150 billion in sanctions relief that Iran would receive as a result of the unfreezing of foreign assets once the Islamic Republic met its obligations under the agreement.

According to Berman, the deal has set in motion a “vast sanctions give away that is far more expansive than most people understand.”

“It is not only the $100 billion or so incorporated into the deal, but also measures like the White House’s attempts to facilitate Iranian access to the U.S. dollar and pressure on state governments to roll back Iranian divestment measures,” he said.

“What they set in motion was this grand reorientation of global economics in favor of Iran,” Berman added.

Despite these concerns, there are still a number of non-nuclear U.S. sanctions in place on Iran relating to terrorism, Iran’s ballistic missile program, and human rights violations—creating financial uncertainty for Iran, and making a number of international companies and banks wary of doing business with the Islamic Republic. Those sanctions are in place in large part because the Iranian Revolutionary Guard, which is designated as a terrorist organization by the U.S. government, is heavily involved in Iran’s economy.

As such, with Iran not seeing the economic windfall that it had hoped for and had promised its people, Iranian leaders have publicly complained that the U.S. has not held its end of the bargain in the nuclear deal.

“On paper, the Americans say banks can trade with Iran, but in practice they act in such an Iranophobic way that no trade can take place with Iran,” Iranian Supreme Leader Ayatollah Ali Khamenei said in April, while accusing the U.S. of engaging in “obstruction and deception.”

Yet Berman dismissed these complaints by Iranian leaders, saying that it is important to “separate what Iran says from what it is actually doing.”

Just weeks after the implementation of the nuclear deal in January 2016, Chinese President Xi Jinping visited Tehran, where both nations agreed to increase bilateral trade to $600 billion over the next 10 years. Meanwhile, Russia used the pretext of the lifting of nuclear sanctions to renew its deal to provide Iran with the advanced S-300 air defense system.

Even India, which has seen significantly warming relations with Iran’s enemy, Israel, under President Narendra Modi, signed a dozen agreements with Tehran during a visit by Modi to the Islamic Republic in May, including a $500 million deal to develop Iran’s Chabahar Port.

Before the nuclear deal, Iran “didn’t lack for global ambition, but lacked resources,” said Berman. Now, he explained, “the powers of global politics are such [that] the Iranians can start thinking about what it looks like to not just be a participant in Middle East politics, but a key driver of it, [and] not just be a partner of rogue regimes like North Korea or Venezuela, but to actually be a patron of them….That’s a fundamentally new dynamic for the Iranians.”

For Israel, the nuclear agreement represented a major blow to the efforts of Prime Minister Benjamin Netanyahu, who spoke out strongly and regularly against the pre-deal nuclear negotiations and has argued that the deal does not fully dismantle Iran’s nuclear capabilities.

Yet a year after the deal was signed, there appears to be less concern about Iran’s nuclear ambitions within Israel’s leadership and more of a focus on Iran’s regional ambitions, its involvement in Syria, and Iran’s support for its terror proxies.

This sentiment was clear in recent remarks by former Israeli Defense Minister Moshe Ya’alon, who stated at the Herzilya Conference in June that Iran’s nuclear program “has been frozen in light of the deal signed by the world powers and does not constitute an immediate, existential threat for Israel.”

Similarly, Israel Defense Forces Chief of Staff Lt. Gen. Gadi Eizenkot said during a speech in January that a current “decline” in existential threats to Israel comes due to a variety of emerging trends, including the Iran nuclear deal.

The Rand Corporation’s Kaye, who recently returned from a trip to Israel, said that “there is a wide consensus among Israeli analysts that the Iranians are likely to adhere to this agreement.”

But Israeli military officials are now more deeply concerned about the possible economic and military consequences that a richer and more emboldened Iran will bring forth, especially through its support for its terror proxy nations. Kaye cautioned that for Israel, attention “has really turned to Iran’s role in Syria and its relation with Hezbollah as well as a permanent Iranian presence along Israel’s northern border in southern Syria.”

Berman said that “even if you take away the existential question of Iran getting a nuclear weapon later, which is where they (Israeli security officials) still think Iran is headed. What you are looking at is a very negative cycle of economic attrition. [Israelis] expect all the proxies that Iran is funding —Hamas, Hezbollah, Palestinian Islamic Jihad—to have a greater resources in the near future as a result of the nuclear deal.”

As a consequence, Berman said, Israel will need to step up its security and deterrence, and spend more money on defensive weapons and technology such as the Iron Dome and David’s Sling missile defense systems or anti-tunneling technology.

Nevertheless, Kaye contended that by taking the nuclear threat off the table for the time being, Israel might have more of a chance to act boldly against Iran’s terror proxies without the concern of potentially igniting a nuclear conflict with Iran.

“One of the motivations [of the deal] to begin with was to ensure that Iran would not be engaging in this type of behavior under a nuclear umbrella. I think in that context, there is some relief that Iran is at least hemmed in on the nuclear front,” Kaye said.

While it appears that Iran’s compliance with the letter of the deal has so far reduced the likelihood of a nuclear-armed Iran in the short term, there is continued concern among policymakers and analysts over Iran’s aggressive behavior moving forward.

“I think the focus will now only increase towards implementation as well as planning and preparation for what might happen once some of the key elements of this deal start to expire in 10 years,” Kaye said. “The only exception to that will be increased momentum and focus on the missile front. There won’t be a renegotiation on the existing agreement. But there may be a push to expand on the current agreement to include more restrictions on Iranian missile testing and development in exchange for further economic relief.”