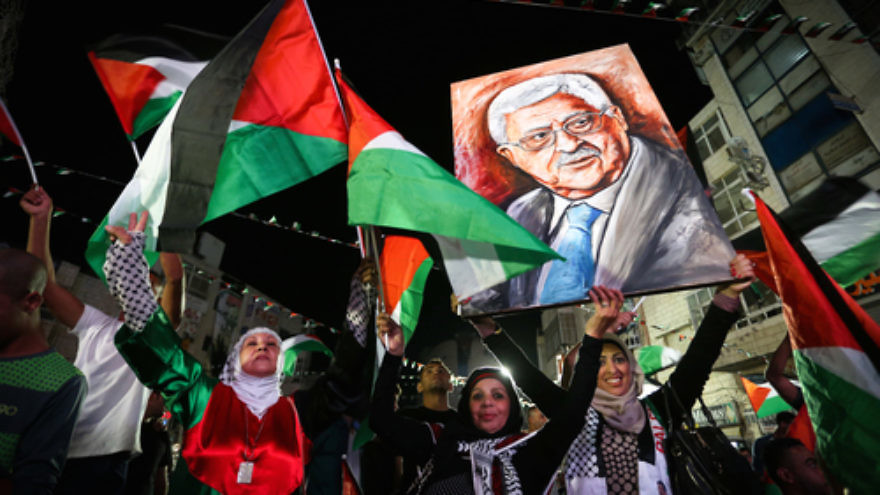 Palestinians in Ramallah wave their national flags and a picture of Palestinian Authority leader Mahmoud Abbas while they watch a live-screening of Abbas's speech at the United Nations on Sept. 30, 2015. Photo by Flash90.
Republish this article
1206 WORDS
Spread the word.
Help JNS grow!
Share now:

The Hamas terrorist group is open about its mission of destroying Israel. But the current wave of Palestinian terror consuming the Jewish state has led Israeli leaders to instead blame the unrest on Palestinian Authority (PA) President Mahmoud Abbas over his failure to condemn terrorism and his incitement of violence, casting doubt on the common assessment of Abbas as a moderate by Western governments and media.

Under Abbas, the PA has not held formal elections since 2006 and only maintains control in the West Bank after being ousted from Gaza by Hamas in 2007. Abbas has maintained a security relationship with Israel out of a shared fear of Hamas, but has also threatening numerous times to break off all such ties with Israel.

Many fear that if a Palestinians election were held today, Hamas—which won the last election in 2006—would beat out Abbas’s Fatah party once again. Many Palestinians cite Fatah’s notorious legacy of financial and administrative corruption as their reason for supporting Hamas.

“Abbas is very aware of this dynamic, and for that reason it has led him to continue to embrace this idea of security cooperation with Israel, although I do question the extent to which he is committed to it,” Jonathan Schanzer, vice president for research at the Foundation for Defense of Democracies (FDD) think tank, told JNS.org. “But he is fully aware that the current chaos in the West Bank can unseat him, so he tepid about this. He is also aware that standing against this uprising or violence pits him against his own people.”

But these days, regardless of what his true stance is on security cooperation, Abbas has not held back when it comes to rhetoric against Israel. His comments have repeatedly inflamed tensions over the Temple Mount holy site, where Palestinian have accused Israel of attempting to change the status quo despite repeated statements by Israeli Prime Minister Benjamin Netanyahu that the status quo will remain.

Regarding recent Palestinian riots, stabbings, firebomb attacks, and terrorist murders of Israeli Jews, Palestinian Media Watchreported that Abbas said Oct. 6 on the PA’s official television network, “The Palestinian side did not attack and did not do anything against the Israelis. If they [Israelis] think that the [Palestinian] people in Jerusalem are protecting themselves, that is our right. We have to protect our holy sites.”

Similarly, Abbas said Sept. 16, “[The] Al-Aqsa [mosque on the Temple Mount] is ours and so is the Church of the Holy Sepulchre. They (Israelis) have no right to desecrate them with their filthy feet. We won’t allow them to do so and we will do whatever we can to defend Jerusalem.”

“Each drop of blood that was spilled in Jerusalem is pure blood as long as it’s for the sake of Allah. Every shahid (martyr) will be in heaven and every wounded person will be rewarded, by Allah’s will,” he added.

Abbas’s incendiary rhetoric regarding the Temple Mount has been noticeably left out of some mainstream media coverage of the Palestinian leader. A recent New York Times article on the violence in Israel characterized Abbas as being “committed to nonviolence” during his tenure as PA president, a description that does not fall in line with his recent statements.

Further, in his recent speech before the United Nations General Assembly, Abbas said the Palestinians no longer regard themselves bound by the 1993 Oslo Accords, which attempted to create peace between Israelis and the Palestinians.

“As long as Israel refuses to commit to the agreements signed with us, which render us an authority without real powers, and as long as Israel refuses to cease settlement activities and to release of the fourth group of Palestinian prisoners in accordance with our agreements, they leave us no choice but to insist that we will not remain the only ones committed to the implementation of these agreements, while Israel continuously violates them,” Abbas told the world body.

During the same speech, Abbas accused Israel of exacerbating tensions on the Temple Mount, citing “extremist Israeli group incursions on the Al-Aqsa mosque.”

Netanyahu said Abbas’s U.N. speech was “deceitful and encourages incitement and lawlessness in the Middle East.”

According to FDD’s Schanzer, the recent spate of Palestinian terror attacks throughout Israel, especially in Jerusalem, have largely been the work of Hamas and the Islamic Movement in Israel.

During a briefing with the Israeli cabinet, a senior official from Israel’s Shin Bet security service said Abbas is not actively encouraging terrorism “and is even instructing his security forces to prevent terror attacks as much as possible,” Haaretz reported. Yet the Shin Bet added that senior PA and PLO officials “are part of the incitement campaign that is exasperating the violence.”

Additionally, the Shin Bet stressed that Hamas and the Islamic Movement were the “main forces incitement that have led to the current escalation.”

Schanzer agreed with that Shin Bet assessment, telling JNS.org that Abbas is “not exactly condemning the violence, but isn’t stoking it either.”

At the same time, members of the Abbas-led Fatah party—including so-called moderates—have been actively supporting terrorists.

“Meanwhile, his own Fatah party does seem to be glorifying the violence and praising those who carry out the violence against the Israelis,” Schanzer said, calling the situation a “very strange dichotomy.”

Fatah has also been distributing leaflets honoring terrorists that include photos of Abbas as well as the late Palestinian leader Yasser Arafat. One leaflet, honoring terrorist Ishaq Badran, who stabbed an Israeli in eastern Jerusalem on Oct. 10, promised terrorists “eternal life and glory,” Yedioth Ahronoth reported.

Schanzer believes that Abbas now finds himself in a similar to that of his predecessor, Arafat.

“To a certain extent, it mirrors the position Yasser Arafat was in during the second intifada. [Arafat] had lost a lot of legitimacy due to corruption and the failed peace process. Arafat saw [supporting the intifada] as a way of consolidating power,” Schanzer said.

“It ended up being a huge mistake [for Arafat] and I think Abbas surely recalls this history. In fact, it was Abbas who benefited from Arafat’s mistake,” he added.

Nevertheless, for Netanyahu, the focus remains on Abbas’s incitement as well as his attempts to isolate Israel in the international community.

“The way to undercut [Abbas’s moves at the U.N.] is to undermine Abbas himself,” Schanzer said. “One can understand why Netanyahu is doing this…If Abbas is fully against the violence and thoroughly outspoken on it, we might be looking at a different situation.”