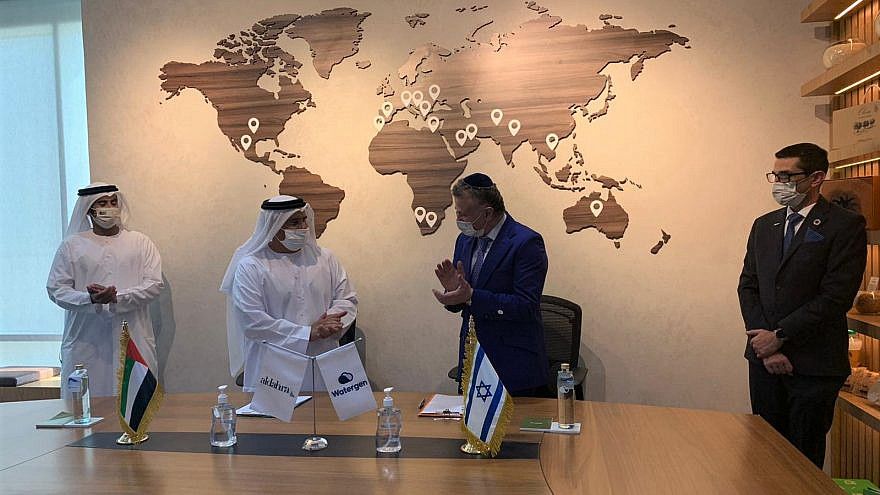 (November 30, 2020 / JNS) A strategic collaboration between the Israeli Watergen company and Emirati Al-Dahra was signed on Nov. 25 in Abu Dhabi, the capital of the United Arab Emirates.

The agreement establishes a partnership between the companies to bring Watergen’s revolutionary water solutions to the UAE and other countries in the region, particularly the Gulf states. It will target many sectors, including but not limited to agriculture, offices and apartment buildings, hotels, industry, maritime, etc.

The agreement between Al-Dahra, headed by vice chairman and co-founder HE Khadim Al Darei, and Watergen, led by president and CEO Dr. Michael Mirilashvili, comes on the heels of a memorandum of understanding (MOU) signed in Israel in October when a high-ranking delegation of Al-Dahra executives visited Israel.

“From the moment that we signed this agreement, it has shown how important the signing of the Abraham Accords was and the tremendous wisdom of our leaders in making this breakthrough for our region and the world. Though I had other plans, as soon as I learned of the accords I rushed here in order to show the world the tremendous impact and importance of this historic step. With this agreement, we’re showing our two nations, the region and the world what is possible with peace,” said Mirilashvili.

Watergen is an innovative Israeli company that has developed a cutting-edge patented technology to generate clean drinking water from the air using cost-effective energy consumption. Its impact creates an additional clean drinking water source while accomplishing it in the most economically efficient manner.

High temperatures and humidity of the region’s air are ideal conditions for Watergen’s devices, which can produce up to 5,000 liters of clean drinking water per day.