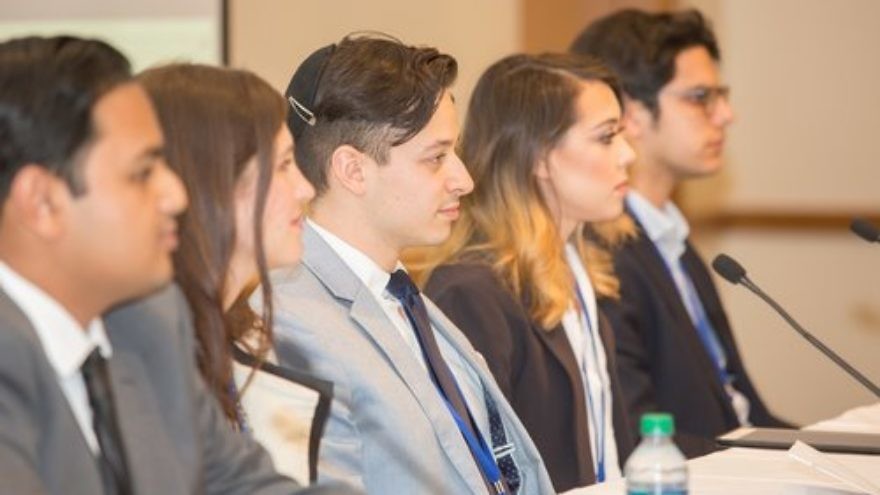 Many colleges and universities “don’t govern in a consistent way when it comes to Israel” and apply a “double standard” to how they treat Jewish victims of prejudice, Harvard University President Emeritus Lawrence Summers said at the Committee for Accuracy in Middle East Reporting in America’s (CAMERA) national conference Dec. 4.

Academics and campus professionals gathered for the media watchdog’s conference—held at Harvard in Cambridge, Mass.—to discuss the complexion of the anti-Israel Boycott, Divestment and Sanctions (BDS) movement as well as rising campus anti-Semitism.

“The goal of the conference was to learn from professors, students, and others on the ground who know campus realities firsthand,” CAMERA Executive Director Andrea Levin told JNS.org. “And we learned a lot. It was powerful to hear how politically correct attitudes often work against Jewish students at a time of rising anti-Semitism. It was also impressive to learn about the positive impact of outspoken faculty and students.”

Summers said in his speech that campus officials are “respectful of the feelings and rights of every minority on campus but Jews.”

Tammi Rossman-Benjamin, director of AMCHA—a non-profit that monitors and combats anti-Semitism on campus—said at the conference that “many Jewish students feel not only that the campus is against Israel, but against them….Students are threatened because of their Jewish identity.”

Earlier this year, a study conducted by the AMCHA Initiative found an “alarming spike in campus anti-Semitism” during the first half of 2016.

According to Dershowitz, this silencing of pro-Israel voices affects not only students, but also pro-Israel faculty members.

“There are so many pro-Israel faculty,” Dershowitz said. “But they won’t speak up. They’re afraid.”

Cornell Law School Professor William Jacobson, who in his remarks detailed the history of Arab anti-Jewish boycotts during the last century, said the intimidation on campus is part of a long and dark history of prejudice against Jews.

Jacobson said that today’s BDS is “the continuation of an almost century-old boycott against Jews,” dishonestly repackaged in a language that appeals to some Western audiences.

Syracuse University Political Science Professor Miriam Elman, similarly, said BDS “is an academic fraud” and that the movement “will fail.”

The CAMERA conference came amid the advancement of legislation in the U.S. Congress that would expand how the U.S. Department of Education defines anti-Semitism and how it advises universities on the identification of discrimination. The legislation seeks to “ensure the Education Department has the necessary statutory tools at their disposal to investigate anti-Jewish incidents.”

The bill, which passed in the Senate last week and is now being debated in the House of Representatives, seeks to address when criticism of Israel, anti-Zionist beliefs, and anti-Semitic sentiments cross the line from protected First Amendment free expression to discrimination. The measure’s Senate sponsors were Sens. Tim Scott (R-S.C.) and Bob Casey (D-Pa.), and its House sponsors are Reps. Peter Roskam (R-Ill.) and Ted Deutch (D-Fla.).

A number of students also spoke at the CAMERA conference, including Rezwan Haq, a Muslim Zionist who used to be a leader in the anti-Israel organization Students for Justice in Palestine (SJP).

“SJP has normalized hatred among college students,” Haq said, recalling the days when he spearheaded anti-Israel events at the University of Central Florida. “Idealism mixed with false information and hate speech is a dangerous thing.”

CAMERA’s Levin told JNS.org that the students who spoke at the conference “were especially moving. Everyone in the audience was touched by the accounts of their experiences.”