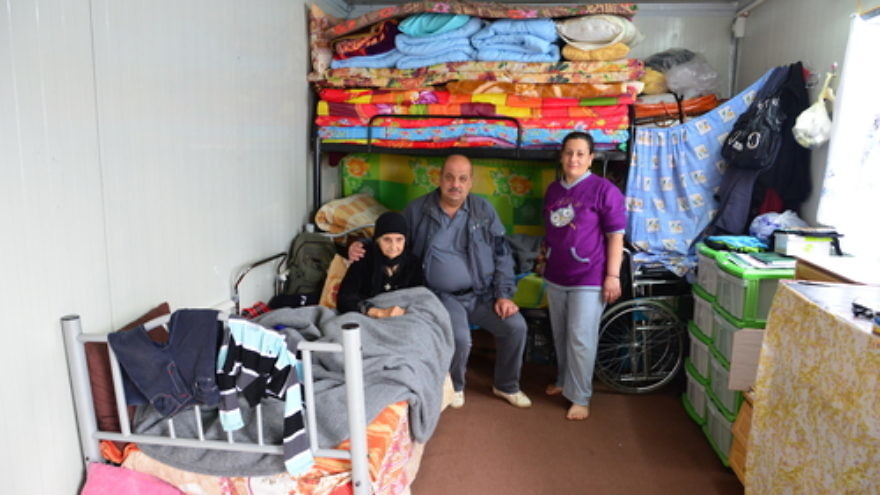 (December 28, 2014 / JNS) The past year was arguably one of the worst in recent memory for many members of the Middle East’s beleaguered Christian minority, as hundreds of thousands were forced by the Islamic State terror group to flee their homes in what is being described as a genocide.

“It is genocide when you take over an area and strip people of their homes [and] their lives, and send them to an ambiguous future,” said Chaldean Catholic Archbishop Bashar Warda of Erbil, the largest city in Iraqi Kurdistan.

Warda, an Iraqi-born Christian who presides over 200,000 Christians and heads up church-run relief efforts in the region, spoke with JNS.org on Christmas Eve from his post just miles from the frontline of the battle against Islamic State.

“[Islamic State is] destroying their churches, their homes, their manuscripts,” Warda said. “It is trying to destroy our whole past and the vast contributions we have had to this country. At the same time it is destroying the future, because [the area’s Christians] wake up in the morning with emptiness and go to sleep at night with emptiness. Their past, present, and future is killed.”

Islamic State jihadists conquered wide swaths of northern Iraq last summer, displacing more than 1.8 million Iraqis, including Christians, from their ancient homelands. According to estimates, more than 125,000 Christians from the city of Mosul and the Nineveh Plains region were displaced.

This displacement occurred in two waves, the first beginning on June 10, when Christians fled Mosul to nearby Christian villages after the Iraqi army fled and the Islamic State took over the city. Then, on July 17, the remaining Christians in Mosul were given the ultimatum to either leave, pay jizya (an Islamic tax on minorities), convert to Islam, or face death, leading to a final exodus of Mosul’s Christians on July 19.

The displacement of Iraqi Christians may spell the end of one of the oldest religious communities in the world. Most Iraqi Christians belong to an ethnic group known as the Assyrians, a people considering themselves to be direct descendants of the numerous ancient Mesopotamian civilizations such as the Sumerians, Akkadians, Babylonians, and Assyrians, who were mentioned frequently in the bible.

Christianity was first brought to modern-day Iraq by Jesus’s Apostle St. Thomas during the 1st century CE, making it one of the oldest Christian communities in the world. Christians formed the majority of the country’s population until the 14th century. The region’s Christians have since subdivided into a number of churches, with the Chaldean Catholic Church and the Assyrian Church of the East forming the largest denominations.

Prior to 2003, it is believed that the Iraqi-Christian population was 1.3-1.5 million. Before the current violence began, that number was estimated to be 250,000-400,000, with most Christians living in Mosul and in the villages of the Nineveh Plains, where there has been a continuous Christian presence for 2,000 years.

Despite the current threats of annihilation, Iraqi Christians are continuing to fight to preserve the customs, culture, and languages of the area’s past. Since fleeing to Kurdistan, many of the Christian IDPs (internally displaced people) have turned to their churches and humanitarian relief organizations for help.

One of the humanitarian groups active in the region is the Catholic charity organization Aid to the Church in Need (ACN). Founded in 1947 by Dutch Catholic priest Father Werenfried van Straaten to assist World War II refugees, the United Kingdom-based group is a Vatican-affiliated agency with offices in more than 20 countries. ACN is active in a total of more than 140 countries, with funds being raised in each individual country.

“Since the outbreak of the civil war in Syria in 2011 and in the wake of the ‘Arab Spring’—developments that have thrown the entire Middle East into turmoil—Aid to the Church in Need, which supports the persecuted and suffering Church in more than 140 countries around the world, has committed significant resources to the region, focusing in particular on vulnerable Christian communities in Iraq, Syria, and Egypt, providing some 10 million Euros in urgent aid,” Edward Clancy, ACN’s director of outreach, told JNS.org.

ACN garnered headlines last month when Prince Charles of Wales issued a video statement ahead of a release of an ACN report on religious freedom.

“It is an indescribable tragedy that Christianity is now under such threat in the Middle East—an area where Christians have lived for 2,000 years, and across which Islam spread in 700 AD, with people of different faiths living together peaceably for centuries,” Prince Charles said in the video.

According to the ACN religious freedom report, Christians—especially those in the Middle East—are the most persecuted faith group in the world. In Iraq, ACN has focused on providing urgent humanitarian support to the numerous displaced people.

“An important effort of our emergency response now focuses on the more than 100,000 displaced Iraqi Christians currently stranded in Iraq. Aid to the Church in Need works closely with the bishops of the affected communities in providing housing, building schools, and meeting the daily food, hygiene, and medical needs of many thousands of vulnerable families,” Clancy told JNS.org.

According to a report compiled by Chaldean Catholic and other Christian leaders in Iraq that was made available to JNS.org, the Christian IDPs face a number of immediate problems, such as diminishing warehouse food supply, housing shortages, and medical needs for chronically ill patients, as well as a lack of schooling for thousands of youths.

At the same time, the report stated that the Christian IDPs are in need of long-term aid to build suitable family housing so that they can stay and find job opportunities, in addition to funding to enable Christian students to pursue higher education. The report stated that aid in these two areas would “enhance Christian existence and contribution in the life of the new Iraqi society.”

Church officials said in the report that many of the Christian IDPs have yet to cope with the social and psychological challenges arising from their traumatic situation, citing a number of challenges such as growing depression, anger, and isolation resulting from cramped and crowded living conditions, as well as little hope of being able to return to their homes in the near future. Without solving these long-term issues, church officials fear that increasing numbers of Christians will begin to permanently leave Iraq.

Pope Francis has frequently spoken out in solidarity with Mideast Christians and their plight. During a recent visit to Turkey, he issued a joint declaration with his Orthodox Christian counterpart, Partiarch Bartholomew of Constantinople, saying, “We cannot resign ourselves to a Middle East without Christians.”

In a letter of before Christmas, Pope Francis urged Mideast Christians to remain steadfast in the face of the emergence of “newer and disturbing” terrorist organizations.

“I write to you just before Christmas, knowing that for many of you the music of your Christmas hymns will also be accompanied by tears and sighs,” the pontiff wrote.

The modern persecution and expulsion of Iraq’s Christian and other minorities draws many parallels to the waves of attacks on, and eventual expulsion of, Iraq’s Jewish community during the mid-20th century. Nearly 135,000 Jews were forced to leave from 1948 onwards.

“Many families do remember what happened to the Jews back in 1948,” Archbishop Warda told JNS.org. “My parents remembered it well and were in the same neighborhood. When the Jews left, they warned the Christians, ‘Sunday comes after Saturday.’”

Archbishop Warda said that members of the older generation frequently describe how they are witnessing history repeat itself.

“That generation still recalls the events and say what is happening now is exactly what happened to the Jewish community,” he said. “They were stripped of everything, just like we are being erased today.”

Similarly, today’s Iraqi Christians are being persecuted by their long-time Muslim neighbors.

“The demolishing of the relationships with their neighbors is terrible,” Warda said. “It was their neighbors who betrayed them. … Our people contributed a lot of the Iraqi civilization and deserve better.”

While recent reports suggest that the U.S.-led military campaign in the region has had limited success, with more than 1,000 jihadists being killed in airstrikes in Syria since September, Kurdish Peshmerga forces have met stiff resistance from Islamic State in their efforts to liberate areas of northern Iraq that are home to the Christians and Yazidi minorities. Meanwhile, the Iraqi army, with the support of U.S. forces, has made slow progress in Iraq’s Anbar province.

“I am really afraid about the future,” Warda said. “There will be a presence of the Christians, but how effective this presence will be is really a question. As a Christian I am naturally hopeful. Let’s pray that things will be better in the coming year.”