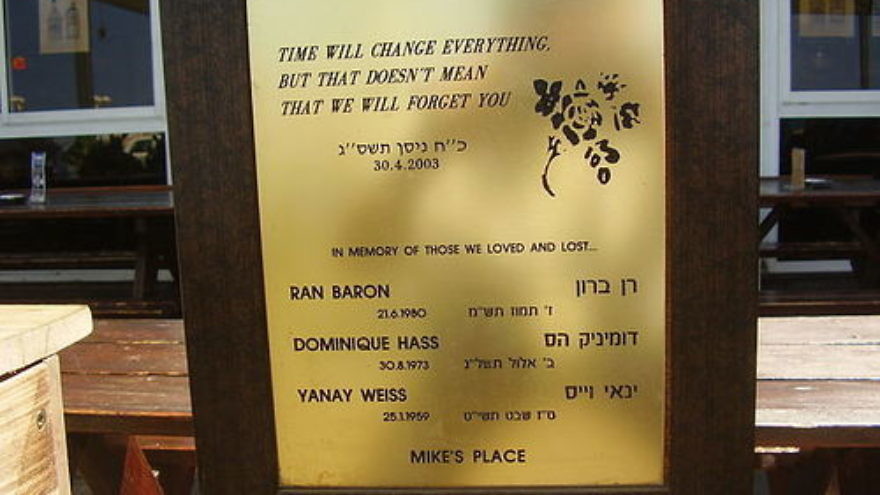 A memorial plaque for the victims of the 2003 suicide-bombing at Mike's Place in Tel Aviv. Credit: Avishai Teicher via Wikimedia Commons.
Republish this article
716 WORDS
Spread the word.
Help JNS grow!
Share now:

In the wake of the recent historic verdict by a federal court in Brooklyn that found Jordanian Arab Bank Plc liable for knowingly providing financial services to Hamas, it’s important to remember that the decision can be more than just a message to financial institutions doing business with terrorists.

This landmark ruling should also be an incredible message to the 297 plaintiffs in the case—who were either injured themselves or have family members who were killed in 24 different Hamas attacks during the Second Intifada—that we recognize their suffering and losses, as well as the travails of all other terrorism survivors, victims, and victims’ family members whose claims derive from other acts of Palestinian violence not yet been addressed in a court of law.

The Brooklyn court’s decision also has more than just legal and financial implications. We must focus on the human impact of terror on surviving individuals and the families—the physical and emotional scars they will carry for the rest of their lives. How can one forget the aftermath of a bomb detonated in a crowded bus or café, bullets flying through a car windshield, or a rocket crashing through an apartment building? What it is like to feel the pain of a bullet entering your body, believing your life is ending, coming home to babies who don’t recognize you, or living with family members, friends, and co-workers who don’t understand that you aren’t the same person you were before an attack (even though you look the same)? What it is like to lose your child or parent or spouse, and to see friends cross the street to avoid talking to you because they don’t know what to say to you? How does one come back to life, and maybe even find light at the end of the tunnel, after a loved one was killed by terrorism?

Over the past decade, I have interviewed terrorism survivors and their families, as well as victims’ families, while compiling my new book, “Living Beyond Terrorism: Israeli Stories of Hope and Healing” (Gefen, 2014). I have heard the voices and passions of otherwise ordinary people performing ordinary activities—Jews, Christians, Muslims, and Druze riding in buses, dining in restaurants, shopping in markets, studying at college, visiting hotels, or walking on the street—who suddenly become victims of suicide bombings, shooting attacks, and rocket attacks. I have delved into their stories: how they were able to cope, or in other cases not able to cope, with experiencing acts of terrorism.

I was privileged to hear, learn, and tell the stories of 16 of the plaintiffs from the recent Arab bank case. They were victims of some of the worst Palestinian terror attacks in the history of Israel, including the Sbarro pizzeria bombing in Jerusalem, the Park Hotel Passover massacre in Netanya, the Mike’s Place bombing in Tel Aviv, and the Hebrew University cafeteria bombing. While these attacks have been etched into the memory of most Israelis and many Americans, the experiences of the plaintiffs in this case are more than a memory—they are the events that shaped the rest of their lives. For the plaintiffs, the verdict was likely a significant step in their emotional journey of healing and trying to make their voices heard. With the court’s decision, it’s clear they have been heard.

As we approach the holiest day on the Jewish calendar, Yom Kippur, let’s remember those who have fallen due to acts of terror and pray for those who have survived, and for their extended families. Let them hear our voices and understand that we have not forgotten them, and that we will continue to remember and take action. Let’s pray that those still waiting for their voices to be heard are indeed heard, and let’s hope and pray those who have perpetrated, abetted, and defended terrorism will take this court decision seriously and finally say, “I’m sorry.”

Dr. Zieva Dauber Konvisser is a fellow of the Institute for Social Innovation at Fielding Graduate University in Santa Barbara, Calif. Her new book, “Living Beyond Terrorism: Israeli Stories of Hope and Healing,” looks at how 48 survivors of terrorism move forward from terrorism to hope and optimism, and from grief to meaning and healing.