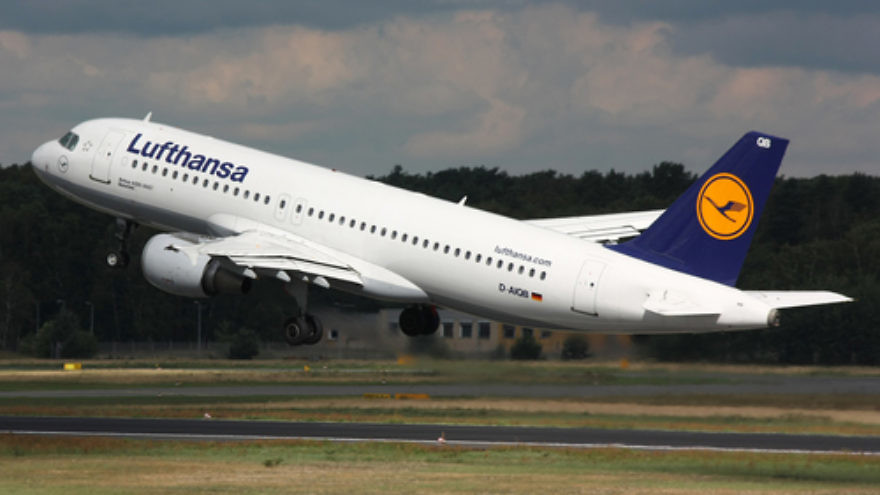 A Lufthansa Airbus A320 takes off at Berlin Tegel Airport. From legacy carriers such as Lufthansa, the largest airline in Europe, to low-cost carriers such as Great Britain’s easyJet, new flights to and from Israel are popping up all over the grid following the EU-Israel "Open Skies" agreement. Credit: Lasse Fuss via Wikimedia Commons.
Republish this article
1097 WORDS
Spread the word.
Help JNS grow!
Share now:

Just several months since Israel and the European Union officially signed their historic “Open Skies” travel agreement, providing all European and Israeli airlines with equal opportunities to launch direct service to and from Tel Aviv, a slew of airlines are already hard at work trying to expand their offerings.

From legacy carriers including Lufthansa German Airlines, which is the largest airline in Europe, to low-cost carriers such as Great Britain’s easyJet, Europe’s top air-transport network, new flights to and from Israel are popping up all over the grid. The airlines’ goal is to take advantage of the agreement in order to give business customers and tourists many more convenient and affordable travel options in reaching the Jewish State and Europe.

Thanks to “Open Skies,” Israeli airlines are also getting in on the action, with the country’s flagship carrier, El Al, announcing additional routes to Europe as well as the launch of its own low-cost brand called “Up,” which will begin service to European destinations this spring.

While the agreement does not come into full effect for all airlines until 2018, Mark Feldman, who has been in the travel business for more than 30 years and is currently CEO of the Jerusalem-based travel agency Zion Tours, explains in an interview with JNS.org that due to “a grandfather clause, an airline like easyJet, which already began its service from London to Tel Aviv four years ago, can already go ahead and expand.”

In an interview with JNS.org, Israeli Tourism Minister Dr. Uzi Landau describes “Open Skies” as a groundbreaking development for the transportation industry in Israel, making travel to and from Europe “more efficient, while providing more competition at lower prices [for the consumer].” He says that the agreement is important in that it “brings Israel closer to Europe, while making [travel to Israel] accessible to larger groups.”

Landau is confident that as a result, “Israel will become the country of choice for many more sectors of people, who will want to take advantage of Israel’s warm climate in addition to unique religious, historical, and cultural sites.”

By “lowering the monetary obstacle,” Israel can expect many more visitors from Europe who will arrive on specialty trips for pleasure, including “those who are into hiking, biking, or wine and culinary trails,” Landau adds.

Tal Muscal, head of Group Communications Israel for the Lufthansa Group, believes that the agreement is a “game changer” in the Israeli travel industry. Muscal tells JNS.org that the deal “will open up Israel to many more tourists, and allow many more Israelis to travel and experience Europe, so everyone benefits.”

Muscal says that Lufthansa “of course will take part in the opportunities this liberalization offers us,” explaining that beginning in March, the airline is adding six more weekly flights to Tel Aviv for the start of the summer season—three from Frankfort and three from Munich—increasing the airline’s total number of weekly flights to Israel to 27, not including the company’s subsidiaries.

In regard to the overall impact “Open Skies” will have on Lufthansa, Muscal says, “We are one of the largest carriers serving Tel Aviv. Therefore anytime we have the chance of increasing the frequency of bringing our customers to our hubs [in Europe], and from there to the world, it’s a wonderful opportunity that we can take advantage of.” Lufthansa’s customers “are very happy about new services,” he adds.

Feldman says that at least 20 new routes have opened up so far thanks to the agreement, mainly offered by low-cost carriers. He believes that “Open Skies” has the potential of greatly benefiting the Israeli economy through a significant increase in European tourist money being spent on nights in Israeli hotels and on restaurant expenditures.

The agreement “will have a major benefit for the Israeli consumer as well,” according to Feldman.

“He or she can fly to Europe at a substantially cheaper rate than in 2013, so it’s a win-win for Israel’s economy and the Israeli consumer flying aboard,” he says.

Feldman states emphatically that since he is “a big believer in [the] consumer [coming] first, the only caveat is that the Israeli government needs to ensure consumer protection.” He says that over the past few years, there were several occasions in which travelers got burned because after they purchased airline tickets, the airlines stopped operating.

Israel’s main concern “is safety and not consumer protection,” explains Feldman. He notes that if an airline goes belly-up while you are away, “you are either stuck abroad, or you lose your money.”

“In contrast with North America, where you can cancel payment, here you can’t,” he says.

Feldman also feels that changes are necessary for Israel’s local carriers to remain competitive in the aftermath of the “Open Skies” agreement. He cites issues such as poor management and a scarcity of aircrafts, suggesting that Israel’s three carriers (El Al, Arkia, and Israir) should merge their fleets and work together for the greater good, in addition to focusing on adding more profitable routes like those to North America and the Far East.

Yet the Israeli Ministry of Tourism, citing data from the Federation of Israeli Economic Organizations, says that when the “Open Skies” agreement is fully implemented, it will lead to an increase of 250,000 European tourists coming to Israel during the first year it is implemented. The ministry says that this will result in the creation of 10,000 new Israeli jobs, a significant majority of them in the periphery.

Feldman, however, believes that “until we see a massive growth in new hotels [in Israel],” new jobs for Israelis “will be far less than forecast.” He explains that as a direct result of the new “Open Skies” policy, Israel’s hotel association is for the first time reporting an average price of as high as $400 per room per night. While that represents an increase in revenue for Israel, Feldman says an additional supply of hotel rooms is still needed to meet the demand presented by an increased number of tourists visiting Israel.