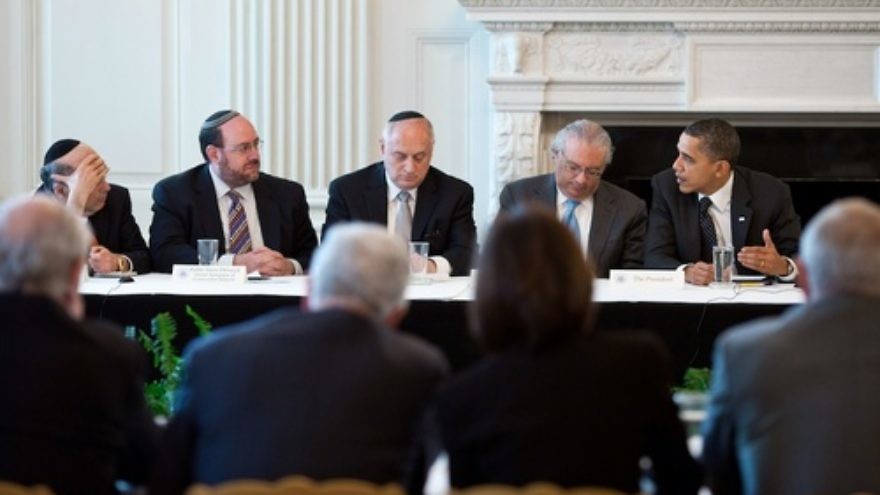 (May 4, 2014 / JNS) Since the Conference of Presidents of Major American Jewish Organizations voted April 30 to reject the membership application of the self-labeled “pro-Israel, pro-peace” lobby J Street, the umbrella group has come under siege with accusations of not being adequately representative of U.S. Jewry’s views and for being controlled by a faction of small right-wing members.

Yet a closer look at the Conference’s makeup reveals the prevalence of politically centrist or apolitical organizations—particularly among its largest members—such as the Jewish National Fund, Hadassah, the Anti-Defamation League (ADL), the American Jewish Committee, B’nai B’rith International, the Jewish Federations of North America, and the American Jewish Joint Distribution Committee. Also included in the Conference are openly liberal groups such as Ameinu and Americans for Peace Now.

“A majority of the groups voting against J Street were secular, centrist groups, not religious or right-wing,” Zionist Organization of America (ZOA) National President Morton A. Klein told JNS.org, noting that by his count there are no more than 11 religious or right-wing groups among the Conference’s 50 members.

“To say it’s not inclusive when you have Peace Now, Ameniu, [American Friends of] Likud, and ZOA in the Conference, is an absurd statement,” Klein added.

J Street responded to the vote with a letter on its website addressed to Conference of Presidents Executive Vice Chairman/CEO Malcolm Hoenlein, stating, “Dear Malcolm: Thank you for finally making it clear that the Conference of Presidents is not representative of the voice of the Jewish community. We recognize the need for an open and honest conversation on Israel in the United States. We appreciate you being honest. Now we’ll work on the openness.”

To gain membership in the Conference, J Street needed the support of two-thirds of the body’s members. Forty-two members showed up for the vote, whose final tally was 22 against J Street, 17 in favor, and three abstentions.

“If they would have won, it would have been a ‘democratic decision,’ and now that they didn’t win, J Street and their supporters complain,” Rabbi Pesach Lerner—executive vice president emeritus of the National Council of Young Israel, a Conference member—told JNS.org. “They use a system when it’s an advantage to them, but when it’s not to their advantage the system’s not good anymore. They knew the rules walking in.”

Yet after the vote, J Street supporters questioned the Conference’s rules, structure, and inclusivity. Some said they would consider further action in response to the vote.

Kenneth Bob, national president of Ameinu, told JNS.org that the vote “demonstrates that there is something wrong with the structure [of the Conference] when even though member organizations that represent the majority of the organized American Jewish community publicly supported the membership application, as well as leading communal organizations like the JCPA (Jewish Council for Public Affairs) and the ADL, the measure failed.”

Rabbi Julie Schonfeld, executive vice president of the Conservative movement’s Rabbinical Assembly, said the “large gaps between the ‘popular vote’—the size and grassroots membership of organizations that announced their vote for admission of J Street to the Conference—and the final tally of the organizational vote make the need for some kind of evaluation self-evident.”

“Under the circumstances, such reexamination ought to be something that all members of the Conference view as a necessity if we are to retain credibility as an organization that speaks for the Jewish community,” she told JNS.org.

National Council of Jewish Women CEO Nancy K. Kaufman said, “The Conference of Presidents has been seized by a group of organizations who represent but a tiny fraction of the American Jewish community. … We will be discussing options for further action with our colleagues in the Conference who share our point of view.”

Americans for Peace Now said the vote “points out the inadequacy of the Conference of Presidents’ procedures, rules and regulations,” and that its board of directors would “weigh its options in regards to our organization’s relationship” with the Conference.

Perhaps garnering the most attention for his comments was Union for Reform Judaism (URJ) President Rabbi Rick Jacobs, a former member of J Street’s Rabbinic Cabinet.

ZOA’s Klein told JNS.org, “Any group which threatens to leave the Conference because of J Street’s rejection despite J Street’s promotion of boycotting Israel, falsely accusing Israel accusing of war crimes, fighting against Iran sanctions, and supporting both a Hamas-aligned state and [Secretary of State John] Kerry’s ridiculous and odious ‘apartheid’ statement should probably leave.”

“It is saddening to see decent people like the head of one of the Reform organizations distorting the diversity of the Conference, which if anything leans left or a-political, but not right, not to mention that it was J Street’s failure to win over centrists and non-political groups that delivered it so few votes overall,” said Josh Block, CEO and president of The Israel Project.

Block told JNS.org, “The Reform movement is diverse, and rather than stoking conflict inside the movement and the Jewish community over support for Israel, the URJ would be well-served, as would the Jewish people, if the congregational branch would focus on strengthening Jewish continuity and religious practice.”

Ameinu’s Bob and the Rabbinical Assembly’s Schonfeld both told JNS.org that their groups were not currently considering leaving the Conference.

“The Jewish community benefits by having a maximally diverse group such as the Conference— that is why the Conservative movement voted to include J Street,” Schonfeld said. “We do not want to leave, we want to see the Conference revitalized. But if the Conference doesn’t undergo some serious reforms it won’t matter who stays or who goes—the organization will lose its credibility and become irrelevant.”

Bob said, “In terms of leaving the Conference, anything said along those lines could be construed as a threat and that is not how I operate. I prefer to engage in serious conversation about how the Conference can be reformed to better serve the community.”

URJ’s Jacobs explained in his statement, “The [Conference] member organizations of the Reform and Conservative movements, which encompass the overwhelming majority of American Jews, all voted to support J Street’s admission. The Jewish Council for Public Affairs, which represents 14 national and 125 local community-relations agencies, voted ‘yes,’ as did the Anti-Defamation League. Still this group was primarily ‘outvoted’ by those that constitute the right wing of the North American Jewish community.”

But Young Israel’s Lerner noted that the Conservative and Reform movements each have four affiliate groups who are members of the Conference, and given that those eight groups make up nearly half of the 17 groups that voted in favor of J Street, support within the Conference for J Street was not as widespread as perceived.

“If you cared about Israel, and you cared about the Israeli people, how would you vote into Conference an organization [like J Street] that wants to talk to Hamas, whose stated mission is the murder of all Jews and the destruction of Israel?” Lerner told JNS.org. “And when you tell me it’s an open discussion, that you have to ‘open the tent,’ the point is that every tent has to have four walls. The tent may be large, but it has to have four walls to protect the people that are inside.”

The leader of another Conference member group that voted against J Street, who asked to remain anonymous, told JNS.org that the group takes issue with J Street’s tactics—not with its views. In particular, the leader pointed to the lobby’s portrayal of the American Israel Public Affairs Committee (AIPAC) on college campuses.

“AIPAC is not left, AIPAC is not right, AIPAC is representing whatever the Israeli population votes, democratically in their government,” the leader said. “They’re trying to create a relationship between that government—whether it is a left government, a center government, or a right government—and the United States of America. We think it’s very sinister, dishonest, and disingenuous, the way that the J Street professionals portray AIPAC on campus.”