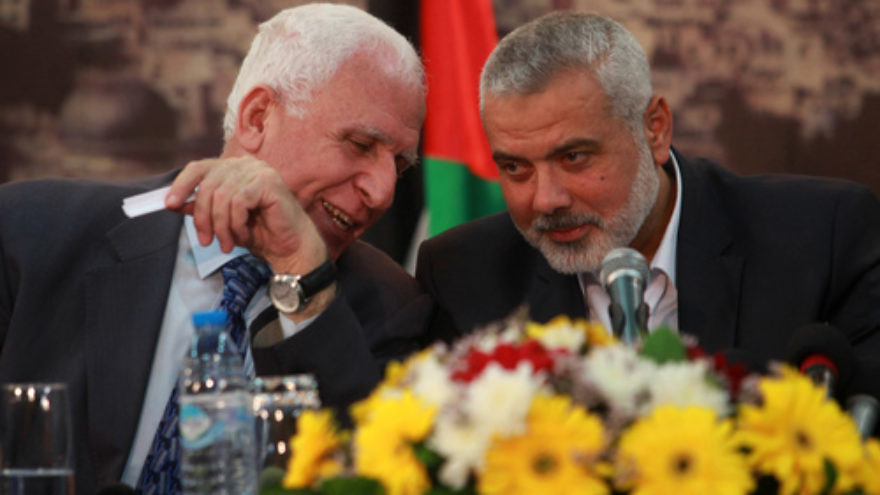 With the recent collapse of the U.S.-brokered peace negotiations, the Palestinian leadership has embarked on a broad plan of unilateral action to gain recognition of a Palestinian state and to isolate Israel internationally. Couple those developments with the Palestinian Fatah movement’s unity pact with the terrorist group Hamas, and Israel is facing a complex new reality.

Without peace talks, what options does Israel have left? Will Israel be forced to take its own unilateral steps?

“If [an] agreement is unachievable, then moving independently to shape the borders of Israel is the better course,” Amos Yadlin, a retired Israeli Air Force general and former head of the Israel Defense Forces Military Intelligence Directorate, told JNS.org. “While it is not the [ideal] alternative, it is better than the status quo or a bad agreement [with the Palestinians].

Yadlin, who now serves as director of the Institute for National Security Studies (INSS), is among a growing number of respected Israeli leaders putting forth proposals for unilateral steps.

Yadlin argues that while the Clinton parameters—which include the Palestinians agreeing to end the conflict and give up both the “right of return” of Palestinian refugees and dividing Jerusalem—are Israel’s “best option,” it is “highly unlikely” that such an agreement will ever be realized.

Instead, Yadlin believes that Israel should promote an “Israeli option” that preserves Israel’s objectives to remain a “Jewish, democratic, secure, and just state.” He said this move allows Israel to “independently shape its own borders” with a strategy towards “advancing a two-state solution.”

In this scenario, Yadlin said Israel would “withdraw from heavily populated Palestinian areas to the security barrier, keeping the Jordan Valley for security reasons.

Unilateralism, however, has been a taboo subject in Israel for many years since former Israeli Prime Minister Ariel Sharon’s unilateral withdrawal from the Gaza Strip in 2005, which many Israelis—especially on the right—look back upon as a failure due to the rise of Hamas there. Sharon suffered a stroke before he could implement plans for unilateral moves in the West Bank.

As such, Israel is likely to be cautious in considering any unilateral plans, especially given that the status quo still favors Israel.

“I don’t see the Israelis necessarily making any unilateral moves at this moment. The collapse of the peace talks wouldn’t prompt any immediate action from the Israelis, because there is no immediate threat,” Jonathan Schanzer, a Middle East expert and vice president for research at the Foundation for Defense of Democracies, told JNS.org.

Nevertheless, with the ongoing unity talks between Palestinian Authority (PA) President Mahmoud Abbas’s Fatah Party and the terrorist group Hamas, along with recent unilateral actions by the PA through the United Nations and other international avenues, Israel may soon realize it does not have a viable partner for peace—possibly spurring a unilateral move.

“Those are the things that I think could prompt a response from Israel,” Schanzer said.

Other prominent Israelis have come out with their own unilateral plans of action.

Historian and former Israeli ambassador to the U.S. Michael Oren said in an interview in February—while peace talks were still ongoing—that Israel needs to have a “Plan B” like the Palestinians do.

“The two-state solution is the preferred solution. And if we can reach a negotiated agreement with the Palestinians that is permanent, legitimate and assures Israel’s security, that is of course of the preferable choice,” Oren told the Times of Israel.

“However, the Palestinians have intimated that if they can’t reach a negotiated solution with us they then have a Plan B, and their Plan B is a binational state. And I think it’s important that we also have a Plan B,” he said.

Meanwhile, Israeli Economy Minister and Jewish Home party leader Naftali Bennett recently wrote a letter to Prime Minister Benjamin Netanyahu that urged him to annex a number of the major Israeli communities in the West Bank, including Gush Etzion, Maale Adumim, Ofra, Beit El, and several more—which are home to a total of about 440,000 Israelis.

“These areas enjoy a broad national consensus and have security, historical, and moral significance for the State of Israel,” Bennett wrote.

If Netanyahu does decide to pursue a unilateral course of action, one of his toughest sells might be with the international community, which has rejected previous Israeli unilateral moves such as the annexation of eastern Jerusalem or the Golan Heights.

In order to address this, Yadlin believes that Israel should offer the Palestinians a “fair and generous agreement” before taking any unilateral steps.

After nine months of negotiations that produced little results, U.S. Secretary of State John Kerry has said that the U.S. will likely take a “pause” in its peace efforts.

Without peace talks holding back the Palestinians, it is clear that Abbas is seeking to shape his own legacy and future—one that may include reuniting the Palestinian people, which split under his watch during Hamas’s bloody 2007 takeover of Gaza.

“You can make a very valid argument that all of these moves are designed to spook the U.S. and Israel and force them back to the table to yield more concessions. I would say that the trajectory is far from clear,” Schanzer said.

Yadlin believes that Israel must be proactive and not allow the Palestinians, or anyone else, to dictate their terms to the Jewish state.

“[Unilateral action] is a move done out of a position of strength and the ability to shape your own destiny according to parameters that I believe are better for the state of Israel,” he said.