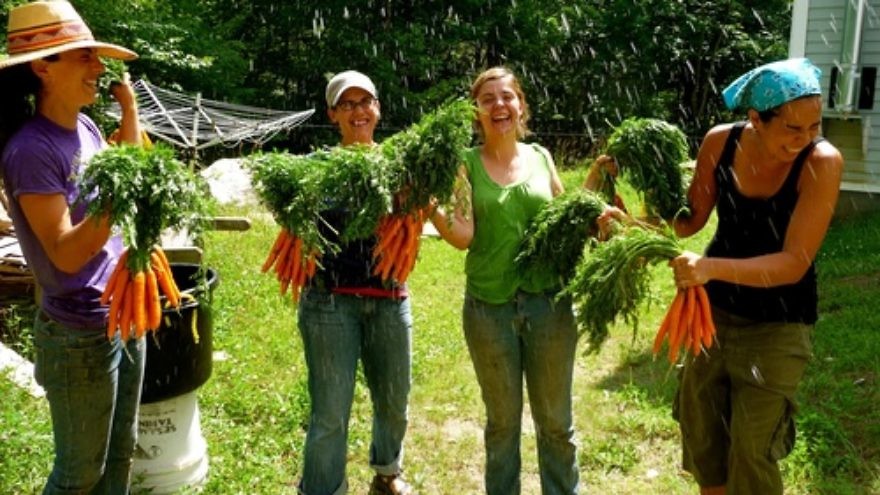 (March 10, 2014 / JNS) More than five months after the Pew Research Center’s “A Portrait of Jewish Americans” survey drew widespread pessimism over rising intermarriage and assimilation, as well as declining connection with synagogues and other institutions, proponents of a newly released study believe they may have the antidote for what ails the Jewish community.

On March 10, the Jewish nonprofit Hazon and six funders released “Seeds of Opportunity: A National Study of Immersive Jewish Outdoor, Food, and Environmental Education (JOFEE),” whose findings drew from a mixture of focus-group data, a survey of 800 people age 18 and older, and review forms submitted by 41 programs. All programs examined were what the study called “immersive” experiences of four days or longer that fall under the umbrella of “JOFEE.” The acronym, although coined specifically for the purpose of the study, is lingo that the report’s supporters hope will grow to define a movement and become part of the Jewish vernacular.

The study identified a total of 2,405 people who participated in 41 different JOFEE programs in 2012, up from 197 participants across six JOFEE programs in 2000. Programs included Jewish holiday retreats, conferences, outdoor/food adventures, camp (for counselors and staff), fellowships and apprenticeships, and others. For survey respondents who reported that they felt disconnected from Jewish life at some point but subsequently found a way to reconnect, 32 percent said a JOFEE experience was the top reason they reconnected—the most popular reason for reconnection in the study (followed by “new Jewish friends or community” at 22 percent).

Eighty-four percent of respondents said JOFEE experiences increased their sense of hope for the Jewish people. Seventy-three percent of participants in JOFEE programs considered themselves to be a leader in their Jewish community, with 67 percent of that group saying their JOFEE experience influenced their leadership. Eighty-six percent agreed with the statement, “How I relate to the outdoors, food, or environment is an expression of my Jewishness.”

“I think that most of the headline numbers in Pew seem to be pointed flat to down, in terms of rates of synagogue affiliation, giving to [the Jewish] Federation, attachment to Israel, and this study is kind of fascinating because it shows in a sense that underneath the radar of organized Jewish life over the last dozen years, this new field of Jewish food education, Jewish outdoor education, and Jewish environmental education has grown really sharply, and is having a positive impact pretty much everywhere it goes,” said Nigel Savage, president of Hazon, whose mission is “to create a healthier and more sustainable Jewish community, and a healthier and more sustainable world for all.”

“It has really happened on the ground, as person by person around the country has said, ‘You know, I really care about food or the environment or being outdoors on the one hand, and on the other hand, I actually really care about Jewish life, and I really want to put these two things together with intellectual integrity,” he said.

Savage said he is looking for JOFEE’s trajectory to mirror the rise of the Jewish Food Movement, which was also initiated by Hazon. He noted that while a Google search of “Christian food movement” in quotes yields only two results and “Catholic food movement” produces three, “Jewish food movement” generates about 80,000 because the movement was formally named.

“I think that naming something is very powerful,” said Savage. He said JOFEE is now the “shorthand that we’re going to use to try and broadly describe the space” of Jewish outdoor, food, and environmental education.

Jakir Manela, executive director of the Maryland-based Pearlstone Center—whose retreat center, farm, and programs aim to “enable and inspire vibrant Jewish life,” according to the center’s website—echoed Savage’s sentiment that encouraging the use of the JOFEE acronym is beneficial for the movement.

“Farming on its own is just one tool of the JOFEE world, and may or may not speak to a particular institution, a particular demographic of the greater community,” he told JNS.org. “But taken as a whole, the JOFEE world is made up of very closely related parts—farming, environment, food, outdoors—and all of these things are obviously related, integrated.”

Manela said he thinks a growing number of funders believe that some combination of JOFEE’s components is “relevant and applicable in almost every, if not every, Jewish community across the country, and is worthy of consideration as a pillar of what a dynamic, impactful Jewish education should look like in the 21st century.”

“People care about their health, the environment, and social justice as well as non-traditional and meaningful ways to connect with other Jews and the community,” Leichtag Foundation Executive Vice-President Charlene Seidle said in a statement.

The JOFEE survey had a median respondent age of 32, and a summary of the study said such a figure “demonstrates the appeal of immersive JOFEE programs to a younger population than the Jewish population nationally.”

“Our experience with young adults has shown that they are eager to create and participate in meaningful Jewish experiences that are relevant to themselves and their peers, and JOFEE programs are no exception,” said Lynn Schusterman, chair of the Schusterman Family Foundation.

Manela told JNS.org, “My sense is that synagogues and federations, and in general, the Jewish world, is really hungry and excited to see young people coming out of programs like this and saying, ‘I’m ready. I’m ready to participate. I’m ready to contribute. I’m ready to make an impact. I’m ready to lead. I have a vision for what Judaism can be, how I want it to be part of my life and part of the community.’”

The JOFEE movement “will play a really critical, prominent, and positive role in defining the Jewish future, and really in healthy ways, in nourishing ways for the Jewish people,” he added.

While the Pew study and other reports confirm that “not everything in the Jewish community has worked or is working,” the JOFEE study results spotlight “an arena of Jewish life that is new, that is young, that is just growing in leaps and bounds and burgeoning,” Manela explained.

What is behind the optimism created by JOFEE experiences? Savage said Jewish life “comes alive when you’re outdoors.” For instance, he said, “When you connect to Israel on the seat of a bike, or when you go across the country learning about food, it’s incredibly exciting to draw the lines of connection between Torah, and Jewish tradition, and Jewish history, and the people of the state of Israel today.”

Regarding the study’s findings on those who were alienated from Jewish life but reconnected through a JOFEE experience, Savage said the Jewish community—especially those re-entering the community—is rethinking traditional parameters of affiliation such as synagogue membership or keeping kosher.

“We’re starting to see anecdotally, that one example of being Jewish is having dinner with friends on Friday night in somebody’s home, and cooking dinner together, whether you lit candles or not or made Kiddush or not,” he said.

“We often informally talk about people who are ‘affiliated’ or ‘unaffiliated’ as if these were fixed and straightforward categories,” Savage added. “But actually, you only have to think of your own life and any 15 people you know to realize that it’s not simple as that.”

With Jewish life at least on some level “up in the air” right now, and both older and newer Jewish organizations “creating the Jewish community of the future,” Savage said the JOFEE study shows that anybody running a Jewish institution or event should be asking themselves, “What do we have going on in our community or our institution about Jewish food, Jewish outdoor education or Jewish environmental education, and what could or should we be doing?”

“To know that there is this arena of Jewish life that is so full of hope, so full of promise, so full of potential, it gives us all greater hope in the Jewish future,” said Manela.