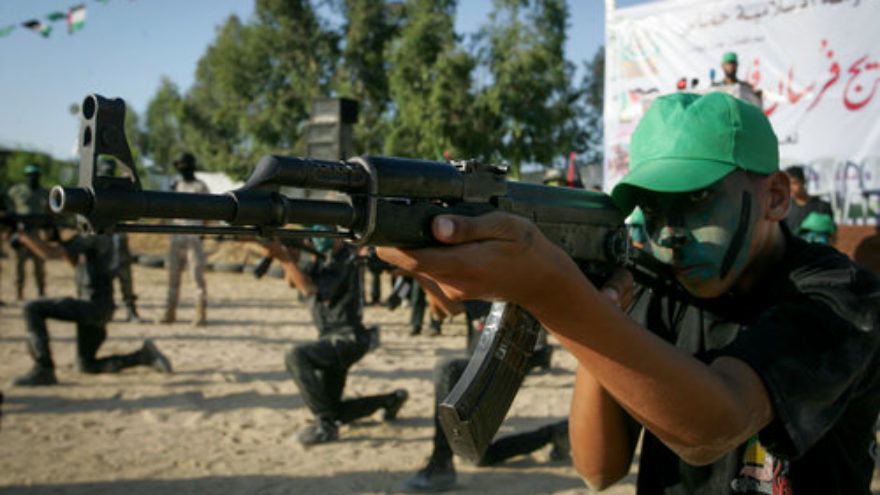 (November 20, 2017 / JNS) In the wake of an attack by a teenage Palestinian terrorist that left two Israelis wounded last Friday, Jewish organizations and community leaders are calling for the withdrawal of a congressional measure targeting Israel’s treatment of Palestinian minors.

Rep. Betty McCollum (D-Minn.) and nine other Democrats in the House of Representatives last week introduced H.R. 4391, which would restrict U.S. aid to Israel if the Israelis undertake the “military detention, interrogation, abuse, or ill-treatment of Palestinian children.” The legislation specifies that any Palestinian under the age of 18 should be considered a child.

Last Friday, a 17-year-old Palestinian deliberately ran over two Israeli civilians near the town of Efrat. One of the victims was a 70-year-old American immigrant. The attacker then exited his vehicle and attempted to stab several Israeli soldiers, who shot and wounded him.

The soldiers’ shooting and detention of the teenage terrorist are among the types of actions that would trigger the sanctions mandated by the McCollum bill.

“I urge Congresswoman McCollum to withdraw her bill, before it helps inspire other young Palestinians to copy the 17-year-old attacker near Efrat,” said Rabbi Abraham Cooper, associate dean of the Simon Wiesenthal Center.

“The bill is dangerously presumptuous,” B’nai B’rith International CEO Daniel S. Mariaschin told JNS.org. “It puts Israel in peril. This measure seemingly ignores the assaults on Israelis. It basically calls on Israel not to respond to acts of terror. At a time of heightened awareness to acts of terror everywhere, such legislation is surprising and disheartening.”

Even if last Friday’s attack had not occurred, “this is an unwise piece of legislation,” Steve Grossman, former president of AIPAC and ex-chairman of the Democratic National Committee, told JNS.org. “If the sponsors don’t withdraw it on their own, I urge them to do so—and if not, I hope the members of the House Foreign Affairs Committee will report it out unfavorably and make it clear to their colleagues that the bill is unwise and they do not support it.”

“Israel has a solid system of checks and balances in place” to address any instances in which Israeli soldiers act inappropriately, Grossman said. “Israel, unlike virtually every other country in that region, has a robust and independent judiciary, which steps in if actions go beyond what is appropriate. It’s a central feature of Israel’s open and democratic society and it functions very effectively.” Therefore, Grossman said, “I agree with those who are saying the bill should not see the light of the day. This legislation is hostile to Israel, and hostile to appropriate public policy.”

The purpose of McCollum’s bill is “to paint Israel in a negative light by presenting issues out of context, and misrepresenting the facts in the Middle East,” said Betty Ehrenberg, executive director of the World Jewish Congress in North America. “The truth is that it is the Palestinians who abuse children by putting them in harm’s way and sending them out to commit stabbings, to throw rocks that have killed and wounded, and trained them to be suicide bombers.”

The McCollum bill’s nine co-sponsors are Reps. Mark Pocan of Wisconsin; Earl Blumenauer and Peter A. DeFazio of Oregon; André Carson of Indiana; John Conyers, Jr. of Michigan; Danny K. Davis and Luis V. Gutiérrez of Illinois; Raul Grijalva of Arizona; and Chellie Pingree of Maine. The offices of McCollum and all of the measure’s co-sponsors did not immediately respond to requests for comment from JNS.org.

According to an analysis prepared by the Jerusalem-based research institute NGO Monitor, “the entirety of the [McCollum] bill is premised on factually inaccurate claims from anti-Israel advocacy NGOs” such as Defense for Children International-Palestine (DCI-P). Portions of the text of the bill appear to have been lifted directly, without attribution, from a DCI-P report issued last year or from the DCI-P website.

At least three members of DCI-P’s board—Shawan Jabarin, Nasser Ibrahim and Dr. Majed Nasser—have been affiliated with the Popular Front for the Liberation of Palestine terror group.