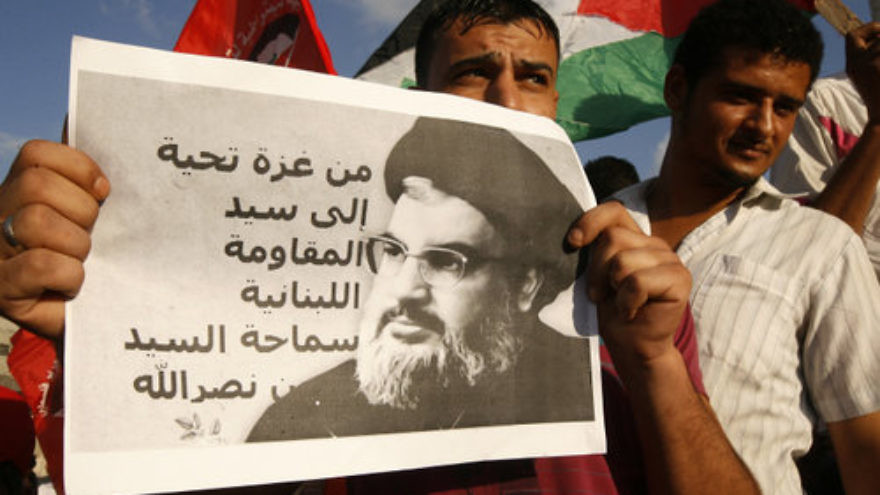 A Palestinian protester from the Popular Front for the Liberation of Palestine (PFLP) holds a picture Hezbollah leader Sheikh Hassan Nasrallah during a demonstration in Rafah, in the southern Gaza Strip, on Sept. 3, 2014. Credit: Abed Rahim Khatib/Flash90.
Republish this article
1076 WORDS
Spread the word.
Help JNS grow!
Share now:

(October 21, 2016 / JNS) After months of dithering, the Obama administration has finally taken some action against the Lebanese Islamist terror organization Hezbollah.

The U.S. Treasury Department has applied sanctions on four Hezbollah operatives reportedly planning terror attacks, as well as a company, Al-Inmaa Engineering and Contracting LLC, controlled by a senior Hezbollah financier.  Meanwhile, the U.S. State Department has sanctioned Hezbollah commander Haytham ‘Ali Tabataba’i, also known as Abu ‘Ali Al-Tabataba’i, under U.S. counterterrorism rules. He has lead Hezbollah special forces, operated in Syria and reportedly was with Shi’a rebels in Yemen, according to the State Department.

These measures are small, but they are, at least, a reminder of destructive forces in the Middle East beyond ISIS. Hezbollah, created by the Iranians as a proxy force to wage war on Israel, is now an integral element of the Russian-Iranian-Syrian regime axis that has successfully exploited the emergence of ISIS to establish itself as the current, dominant power bloc in the Middle East.

As the price of his flimsy deal with Iran over its nuclear ambitions, President Barack Obama has allowed this bloc to rise unchallenged, and even downplayed the threat it represents. As Secretary of State John Kerry put it at the end of September, speaking to a group of Syrians, imploring for an end to the slaughter in the northern city of Aleppo, the U.S. isn’t going to take the fight to Hezbollah, because “Hezbollah is not plotting against us.”

Given that Hezbollah has remained faithful to the same Islamist ideology since its founding, and carried out shocking acts of global terror, like the 1983 bombing of U.S. Marines in Beirut and the Buenos Aires bombing of the AMIA Jewish Center in 1994, one wonders what “not plotting against us” means exactly.

Hezbollah, after all, only exists to plot against “us:” Israel, the United States, the Sunni Arab countries, Europe, indeed, anyone who stands against the terror organization. Perhaps it’s Kerry’s way of saying, “Hezbollah isn’t a priority in the way that ISIS is,” leaving us in the grotesque position of enabling one lot of Islamist barbarians from the Shi’a side, as we confront another lot of Islamist barbarians from the Sunni side.

Make no mistake, Hezbollah is barbaric, and its current alignment with Vladimir Putin’s dictatorship in Russia doesn’t make it acceptable. Israelis have had decades of experience with its goose-stepping fighters, most recently during the 2006 war in Lebanon, when Hezbollah rained down hundreds of missiles upon Haifa and other northern cities. This year, the beleaguered people of Aleppo have been getting their own taste of the same.

Since at least February, Hezbollah has played a critical role on the ground in northern Syria, fighting on behalf of the tyrant President Bashar al Assad. As the Wall Street Journal reported at the time, “Hezbollah along with members of Iran’s powerful Revolutionary Guard unit, and thousands of Iran-funded and trained Shiite fighters from Afghanistan, Iraq, Pakistan and elsewhere, are leading the current ground assault in…Aleppo.”

The significance of holding Aleppo was underlined in a bloodcurdling speech back in June by Hezbollah leader Sheikh Hasan Nasrallah, broadcast live on the terror group’s Al Manar television station. “We are facing a new wave…of projects of war against Syria, which are being waged in northern Syria, particularly in the Aleppo region,” Nasrallah asserted. “The defense of Aleppo is the defense of the rest of Syria, it is the defense of Damascus, it is also the defense of Lebanon, and of Iraq. We will increase our presence in Aleppo. Retreat is not permissible.”

Nasrallah has made good on that pledge. In August, Hezbollah deployed its elite Radwan Forces, a special operations unit, to the Hamdaniyeh quarter of Aleppo. As Russian and Syrian jets have pummeled Aleppo from the air, killing thousands of civilians, Hezbollah has engaged in combat on the ground, taking its own casualties in the process, including most recently, one of its top commanders, Hatem Hamadeh.

Since Hezbollah fighters provide ground-level intelligence to continue the Russian and Syrian blitz on Aleppo, the killing of operatives, like Hamadeh, is essential to pushing back on Assad’s gains. Yet the sobering fact remains. Assad and his allies are calling the shots. That’s why Russia has been able to introduce a draft resolution on Aleppo to the U.N. Security Council.  With all the focus on ISIS, there is nary a mention of the war criminals that the Moscow regime is supporting.

Samantha Power, U.S. Ambassador to the U.N., countered the Russian draft by pointing out that if we don’t explicitly name Russia as the main party behind “the unspeakable horrors we are witnessing,” we thereby “obscure responsibility.” But that assessment is shared half-heartedly, at best, by the administration she serves. If there’s a fresh approach to Islamist designs on the Middle East that will be the task of the next president.

Donald Trump, certainly, is not up to that particular job. (That moment during the third presidential debate when he grunted, with the faux empathy of a reality TV show host, “Aleppooo…soooo saaad,” was one of the most skin-crawling of the current cycle.) There is reason to have a scintilla more faith in Hillary Clinton, who unlike her opponent, hasn’t tried to obscure Russia’s role in backing some of our worst enemies in the region. Ironically, the latest dump of WikiLeaks email revelations on this score actually does Clinton some favors, revealing that she has a much more cynical view of Iranian strategy than does Obama. That cynicism extends to Russia and Hezbollah as well.

If Hezbollah comes out of the Syrian war with its prestige strengthened and its threat level boosted, there’s every reason to fear the next target will be Israel. A renewed war on this front will be far more costly and destructive than in 2006. That’s why we should prepare ourselves for a visceral propaganda assault on Israel, if it does end up doing what should have been done long ago – cutting Hezbollah to size, and with it, its Russian, Iranian and Syrian allies.

Ben Cohen, senior editor of TheTower.org & The Tower Magazine, writes a weekly column for JNS.org on Jewish affairs and Middle Eastern politics. His writings have been published in Commentary, the New York Post, Haaretz, The Wall Street Journal, and many other publications. He is the author of “Some of My Best Friends: A Journey Through Twenty-First Century Antisemitism” (Edition Critic, 2014).