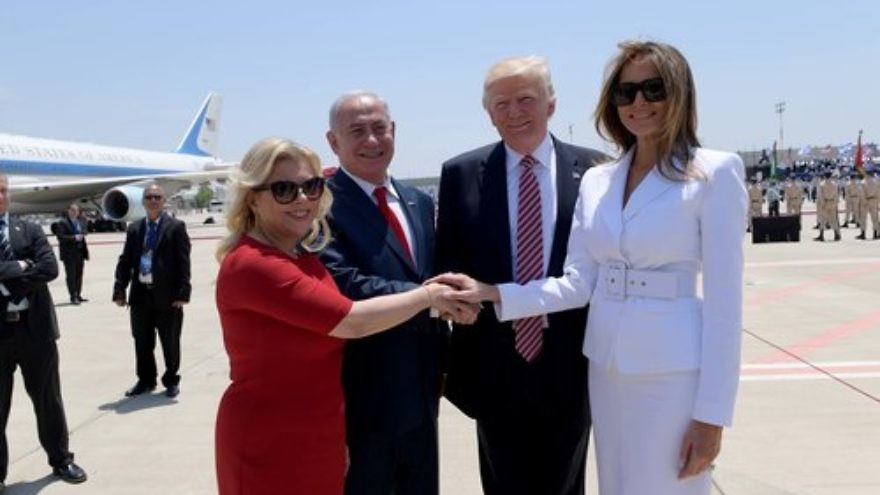 (May 23, 2017 / JNS) JERUSALEM—In Jerusalem Sunday night, as the city prepared to mark the 50th anniversary of its reunification, Israel’s capital felt more like a city under siege than in the midst of a celebration. The airtight security came as President Donald Trump was set to arrive in Jerusalem the next day.

Israeli police and security forces began setting up countless roadblocks as the sun set over the city of gold, Sunday. Normal travel through Jerusalem by car, or even by foot, was impossible. Upon arriving at the ancient limestone walls that serve as the Old City’s boundary, one might as well have been in pre-1967, Jordanian-controlled eastern Jerusalem.

The Shin Bet had set up metal barricades and formed a human shield around the city’s inner sanctum—nobody was getting in. Only later in the evening did this reporter learn that in addition to preparing for Trump’s arrival, the intense security was implemented due to Prime Minister Benjamin Netanyahu’s personal presence during the reunification anniversary celebrations in between the Old City’s Damascus and Jaffa gates.

Those lucky enough to get through the security would find that the Old City had been replaced with a hauntingly quiet ghost town—a deceptive calm at the center of the storm.

The Western Wall (Kotel), meanwhile, was dressed in special garb for Trump’s arrival. Large canopies and veils were erected throughout the Kotel plaza late at night, in anticipation of Trump’s private visit to the holy site Monday afternoon.

“Your visit here, Mr. President, is truly historic. Never before has the first foreign trip of a president of the United States included a visit to Israel,” said Netanyahu. “Thank you, Mr. President. Thank you for this powerful expression of your friendship to Israel.”

Expressing hope for a future of formal Arab-Israeli peace, Netanyahu added, “Mr. President, you just flew from Riyadh to Tel Aviv. I hope that one day an Israeli prime minister will be able to fly from Tel Aviv to Riyadh.”

“Thank you and shalom (hello). It is wonderful to be here in Israel,” Trump said at the start of his first presidential address in the Holy Land.

Those simple words, combined with the historic nature of Trump’s visit and the power of his presence, were not lost on anyone in Jerusalem on this day.

As Trump and Netanyahu continued to exchange greetings, the mood was electric at Rivlin’s presidential residence in Jerusalem. Israeli and foreign media huddled around iPhones and computer screens to watch live feeds of the U.S. president’s arrival. Before Trump arrived, helicopters were heard buzzing and time seemingly stood still. Nobody knew what to expect.

Throughout the first few months of his presidency and on the campaign trail, Trump had spoken strongly against the Iran nuclear deal, openly endorsed relocating the U.S. embassy from Tel Aviv to Jerusalem, turned the U.N. on its head by appointing boldly pro-Israel Ambassador Nikki Haley, and jumped headfirst into attempting to solve the Rubik’s Cube of the Israeli-Palestinian conflict. But Israelis, diaspora pro-Israel activists and Mideast analysts have all wondered the same thing: Can he deliver?

Ahead of Trump’s visit to Israel, Middle East Forum President Daniel Pipes told JNS.org, “I hope that President Trump leaves the tired and failed model of the ‘peace process’ behind. A close look finds that it’s actually been a ‘war process,’ degrading Palestinian-Israel relations and harming a staunch U.S. ally. Time for something new.”

Trump caused anxiety in Israel when he not only appeared to cozy up to Palestinian Authority (PA) President Mahmoud Abbas, who visited the White House May 3, but almost appeared to walk back some of his pro-Israel promises.

White House officials began wavering when questioned about the proposed embassy move, and this past weekend, Trump sealed a 10-year, $350 billion arms deal with Saudi Arabia and other Gulf states—solidifying America’s relationship with the world’s largest energy producer, but simultaneously stoking Israeli fears of the move threatening the Jewish state’s qualitative military edge in the region.

Despite the potential Saudi security threat to Israel, many Israeli officials and regional power players see Trump’s rise as a new opportunity.

Israeli Intelligence Minister Yisrael Katz expressed cautious optimism Sunday, saying, “President Trump’s visit strengthens the anti-Iranian camp in the region and presents an opportunity to advance regional security and economic cooperation as a foundation for regional peace. A regional coalition should be built under American leadership to block and push back Iran. At the same time, Israel’s qualitative military edge should be maintained.”

Dr. Jonathan Schanzer, senior vice president of research at the Foundation for Defense of Democracies think tank, told JNS.org, “The most important thing that can come out of these meetings is a path forward for what has been described as a regional framework. The burgeoning ties between Saudi Arabia, the UAE (United Arab Emirates) and other countries of the Gulf with Israel represents the greatest opportunity for regional advancement.”

He added, “It’s unclear how much of the focus of the president’s visit will be on this issue, but the potential for historic gains have never been greater in this regard.”

On the Israeli-Palestinian front, Maj. Gen. (res.) Yaakov Amidror, former head of Israel’s National Security Council, attributed the stagnation in the peace process to the former Obama administration’s reluctance to put pressure on the PA, leaving the Palestinians unwilling to cooperate with Israel.

Amidror said moving the U.S. embassy to western Jerusalem would not change the basis of peace talks, but would signal that the Palestinians cannot “blackmail” the Americans. Therefore, moving the embassy would be a crucial symbolic step in showing U.S. support for Israel, he said.