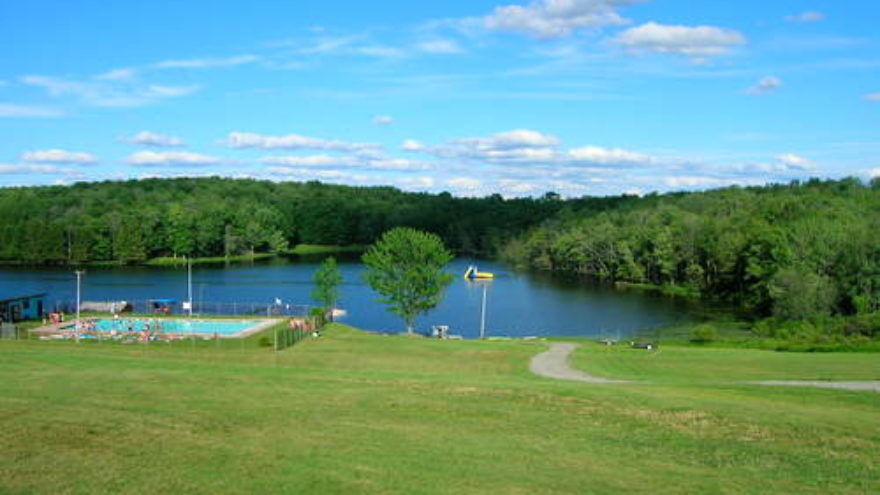 Jewish summer camps such as Camp Ramah in the Poconos are usually open areas, in many cases without fences or barriers, and are often isolated, potentially making them an easier target for attacks. Credit: Yonkeltron via Wikimedia Commons.
Republish this article
1317 WORDS
Spread the word.
Help JNS grow!
Share now:

(May 1, 2015 / JNS) As much as campers (and their parents from afar) would like to focus exclusively on fun in the sun this summer, upticks in anti-Semitism and attacks on Jewish institutions around the world mean that security at Jewish camps should be a top concern for camp administrators, according to Jewish organizations and security firms.

While “there is no imminent or specific threat against the American Jewish community at this time… there is no doubt that… over the last 18 months threatening activities or suspicious activities, [and] plotting and planning, unfortunately have included international Jewish targets,” said Paul Goldenberg, national director of the Secure Community Network (SCN), a non-profit security organization affiliated with the Jewish Federations of North America and the Conference of Presidents of Major American Jewish Organizations, with direct ties to the U.S. Department of Homeland Security.

Goldenberg, who had visited the site of the deadly shootings at the Jewish Community Center of Greater Kansas City and the nearby Village Shalom retirement community in April 2013, said that threats to American Jewish institutions have come both from domestically inspired terrorists and those influenced by radical Islam. There has also been an increase in threats against Jewish institutions from white supremacists—including Frazier Glenn Miller, Jr., perpetrator of the aforementioned Kansas shootings.

The Internet, added Goldenberg, plays an enormous role in transforming members of ultra-nationalist and white supremacist movements from merely “inspired” to “operational”—actually carrying out attacks.

“It is a matter of record that threats against the American Jewish community have increased over the past 18 months,” Goldenberg said.

Goldenberg explained that compared to other Jewish institutions such as schools or synagogues, summer camps are open areas—in many cases without fences or barriers—and often isolated, making them an easier target for attacks.

“We’ve seen with [Anders Behring] Brevik in Norway how quickly one individual can cause great harm to many in an open environment,” Goldenberg said, referring to the terrorist who killed 69 people at a Workers’ Youth League summer camp in July 2011.

Dr. Joshua Gleis, president of the Gleis Security Consulting (GSC) firm, recently raised the issue of security at summer camps in op-eds for The Algemeiner and The Huffington Post, focusing on Jewish camps for the former website and camps in general for the latter. He warned that many camps are “failing to adequately deal with the fact that summer camps have become an ideal ‘soft target.’”

GSC specializes in assessing security risks and the state of security training for institutions such as summer camps. Based on GSC’s assessments, Gleis believes that summer camp administrators are not making the same substantial effort to improve security as many schools and synagogues.

“I don’t want to say that there’s no effort being made, but I don’t see the same results,” he told JNS.org. “In general, the Jewish community, just like any other community, places great value on our children and our educational system, but I think that we have to be more proactive in our security approach.”

“It’s not everyone, I want to be clear about that,” added Gleis. “But there are people that still feel that security is not something that’s needed at a camp, and so they’re not investing the money to do so. The only way—whether it’s a school, a camp, or a synagogue—that things really get done is with parents putting pressure on the administration.”

Ahead of Passover, the Foundation for Jewish Camp (FJC) held a webinar on camp security with the participation of SCN and more than 300 camp directors, in which the camp directors were briefed on safety and security issues applicable to both day and overnight camps prior to the summer of 2015.

“We were concerned by the rise of anti-Semitic activity… I made a statement [on the webinar] that I really hold by, that whatever you’ve done in the past needs to be evaluated or re-evaluated in the context in the new reality which we confront today as a global Jewish community,” Jeremy Fingerman, CEO of FJC, told JNS.org.

The FJC webinar made four specific recommendations. First, each camp should appoint an individual to serve as its key liaison on security issues; that person should be someone everyone on the camp’s staff knows. Second, camps should renew their connection to local law enforcement authorities, even in cases where the connection is already established, because often officers and agency leaders change. Local law enforcement should also be made aware of the times and dates of camp activities. Third, camps should refresh their communication plans so that everyone understands where they need to go and what they are supposed to do in the event of an incident. Lastly, camps should renew staff training so that staffers recognize suspicious activity and know how and who to notify.

SCN’s Goldenberg added that it’s important “to leverage and maximize technology, [such as] video cameras and panic alarm systems.”

“We need to ensure that there’s appropriate surveillance capability,” he said.

Gleis said that while many camps are making efforts to improve security, they should make sure that “they’re investing their resources in the widest means possible.” In instances of limited resources, spending wisely is key, he said.

“When you have a 40-acre property and you’re investing in an electric gate to be able to control vehicles coming in an out, I’m not saying that’s wrong, but you might want to have a manual gate and save the money and use it towards guards for the summer,” said Gleis, who suggested that camps “get law enforcement or retired law enforcement” officials as guards and employ multiple guards.

The only thing more important than investing in guards, he said, is to train staffers in emergency procedures and how “to conduct a proper lockdown of your facility.” A camp “can’t just rely on the guards,” Gleis said.

Paul Reichenbach, the director of Camping and Israel Programs at the Union for Reform Judaism (URJ), told JNS.org that security was “not on everyone’s radar screen” until about five years ago.

“Today… people are taking [security] more seriously than they ever have in the past,” he said.

The shift in mindset began at URJ after the 9/11 attacks, and “recent events, both in public schools and in the Jewish community, have heightened people’s awareness for good reason,” said Reichenbach.

URJ conducts extensive training of camp staffers for a variety of possible emergency situations. All URJ camps have a system in which individuals are responsible for guarding the site 24 hours a day.

“We have developed very specific protocols and job descriptions for those involved in safety and security, and we have developed in every place where we have a camp close working relationships with the local authorities if God forbid we ever need to ask for their support,” Reichenbach said.

He added, “Visitors to camp always need permission to enter the property. Visitors should be identified with name tags or badges; staff should be trained to be aware of their surroundings and any change in their surroundings. The most important thing is training counselors and unit heads to respond appropriately in an emergency situation.”

While some camp directors, staffers, parents, and children might be concerned that heavy-handed security measures could interfere with the camping experience, a good security system can be integrated seamlessly into camp activities, according to SCN’s Goldenberg.

“We don’t want barbed wire fences or walls built around our schools, camps, or synagogues,” Goldenberg said. “We don’t want to wall ourselves off from the rest of society because of these continued threats.”

Parents who routinely send their children to summer camp should not “hesitate for a moment to do so,” he said, adding that those who threaten Jewish institutions “will be successful if we allow ourselves to cease and desist from our quality of life.”