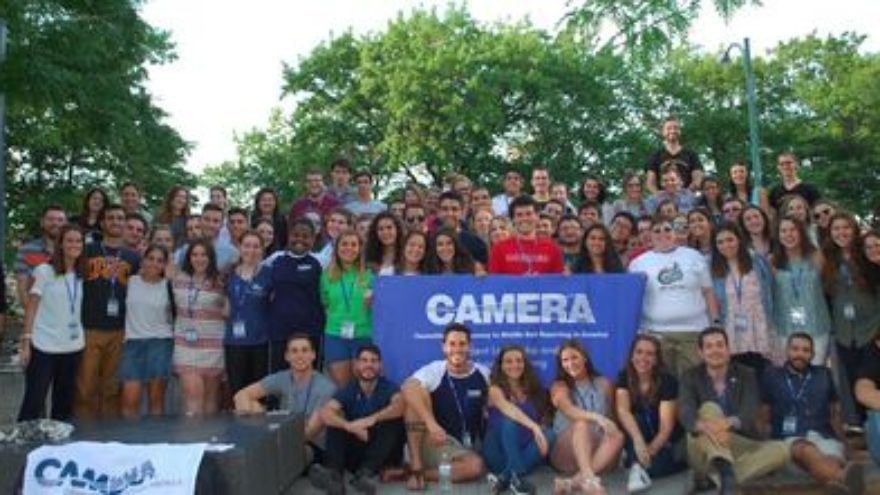 (August 16, 2016 / JNS) For most students, the dog days of August are one final chance for summer traditions such as hitting the beach or visiting national parks with their family before heading back to campus.

For dozens of pro-Israel college students, however, learning about ways to combat increasing campus anti-Semitism and anti-Israel activism was their focus during summer’s final weeks.

Over 80 college students from nearly 70 campuses around the world attended the Committee for Accuracy in Middle East Reporting in America’s (CAMERA) student conference in Boston, Massachusetts Aug. 7-10.

“Reports of intimidation on campus are becoming all too common across the globe,” said Aviva Slomich, CAMERA’s international campus director. “Unfortunately campus anti-Semitism seems to be on the rise, which explains why so many students are eager to learn the skills that are offered at CAMERA’s conference.”

The program comes at a critical time for Jewish and pro-Israel students. A recent report by the AMCHA Initiative found an alarming spike in campus anti-Semitism during the first half of 2016.

Now in its sixth year, the CAMERA conference seeks to help students learn necessary skills for dealing with anti-Israel activists on campus. The three-day event tackles a number of important issues for students, ranging from educational seminars on the BDS movement to learning about bias in the media. Additionally, the conference allows students to put the knowledge they gain from the seminars to practical use, such as learning about techniques on how to talk with extreme anti-Israel activists on campus and how to work within student government to fight BDS resolutions. These all culminate in an impassioned mock BDS hearing on the last day, where students experience first-hand the challenges they may face during the school year.

“What we offer students is high-level intellectual training and emotional support to meet the challenges of the modern college campus,” said Gilad Skolnick, CAMERA’s campus program director. “Throughout the year we give students the resources to counter anti-Israel activity on campus, such as providing films, speakers, teach-ins, rallies all funded by CAMERA.”

Rezwan Haq, a University of Central Florida economics and political science student, told JNS.org that the CAMERA conference helped him set the foundation to combat anti-Israel activity on campus.

“I thought that the CAMERA conference was phenomenal and it truly arms [us] with knowledge and information to combat anti-Israeli rhetoric and BDS on college campuses. I look forward to working with CAMERA during the upcoming school year,” he said.

Haq, however, is not your normal pro-Israel student. He shared his unique experience at the conference in session called “Why I left SJP and joined a CAMERA supported group.”

Raised Muslim, Haq is a first generation immigrant who moved to the United States from Bangladesh at 13. His default inclination was to support the Palestinians because they were also Muslim.

“As I child, I knew I supported Palestine, I just didn’t know why,” he said.

Upon entering school, Haq reached out to his local Students for Justice in Palestine (SJP), a pro-Palestinian activist group that champions the BDS movement on campuses and is often in direct conflict with pro-Israel student groups. Haq said he was outraged at images of Palestinians suffering from the 2014 summer war between Israel and the Palestinian terror group Hamas. He later helped his SJP group bring to campus the “Israeli Apartheid Wall,” which seek to highlight Israel’s treatment of Palestinians by mimicking the security barrier between Israel and the West.

Yet it was that very same wall, meant to protest Israel’s treatment of the Palestinians, which led him to become an advocate for Israel and attend the CAMERA conference.

“Ironically, it was at the Israeli Apartheid Wall was when I spoke to a former IDF (Israel Defense Forces) soldier for the first time in my life. Before then, I used to believe that IDF soldiers were terrorists yet [we] had a genuine conversation when he shared the story of his best friend being killed during ‘Operation Protective Edge,’” Haq said.

“It was at that moment when the image I held of IDF soldiers were humanized,” he added. “I realized that [I] and this former IDF soldier both wanted peace, we just had a different way of going about it.”

Calling it a moment of clarity, Haq’s interaction with the former IDF soldier set off a frenzy of learning for him. He realized that many pro-Palestinian organizations never hold Palestinian leadership accountable for their actions and that they solely exist to slander Israel,” he said.

Also at the conference, students heard first-hand from others who experienced high levels of anti-Israel activism on campus and fought against BDS resolutions.

Jason Storch, a senior pre-med student from Long Island, NY at Vassar College, got involved in pro-Israel advocacy after witnessing the “increasing level of tolerance towards open hostility at anyone so much as on-the-fence about BDS or Israel as a whole,” he told JNS.org.

“I felt it necessary to at least lend an alternative viewpoint I knew was being withheld from the discussion,” Storch said. “I plan to continue evaluating the situation in the Middle East and coming to various conclusions based on the events, but I cannot see myself not advocating for Israel. So long as there is one liberal democracy amid a sea of tyranny, the decision seems less than challenging.”

Vassar College, a liberal arts school in New York’s Hudson Valley, has been known as a hotbed of ant-Israel activism for years. Recently it was at the forefront of the debate over whether or not to support the BDS movement.  In March, the Vassar Student Association (VSA) voted to endorse the BDS movement. However, after an outcry from pro-Israel groups, alumni and school’s administration, a second vote was held, and the resolution was defeated.

“Vassar as a campus is of course highly anti-Israel, however it is important to remember this manifests itself through an only decent-sized minority asserting themselves the loudest,” Storch said. The whole brand of ‘take no prisoners’ SJP-style of pro-Palestinian activism isn’t resonating with the majority of students, he added.

While he’s encouraged by the defeat of the BDS resolution, as well as the students and faculty who finally spoke out against it, Storch remains concerned of the overall situation on campus.

“While I’m glad anti-BDS faculty have emerged, there’s still a vast discrepancy that often makes students, myself included, worry that they’ll be token Israel student in a class, which can be very intimidating,” Storch said.

With summer ending soon, efforts among pro-Palestinian groups targeting Israel and pro-Israel students on campus will no doubt continue in the upcoming school year. As someone who has been on both sides of the conflict, Haq believes it’s important for students to truly listen to each other in hopes of forging peace, not only on campus but for the conflict overall.

“We should put down our talking points and truly listen to what the other side has to say,” Haq said. “So if you’re an Israeli or an advocate of Israel, take the time to listen to a Palestinian and vice-versa. When I heard that IDF soldier speak to me years ago, it was the first time I ever took time to listen to the other side of the story rather than be defensive. We have to understand that the only way to seek peace is for both sides to come to the table.”