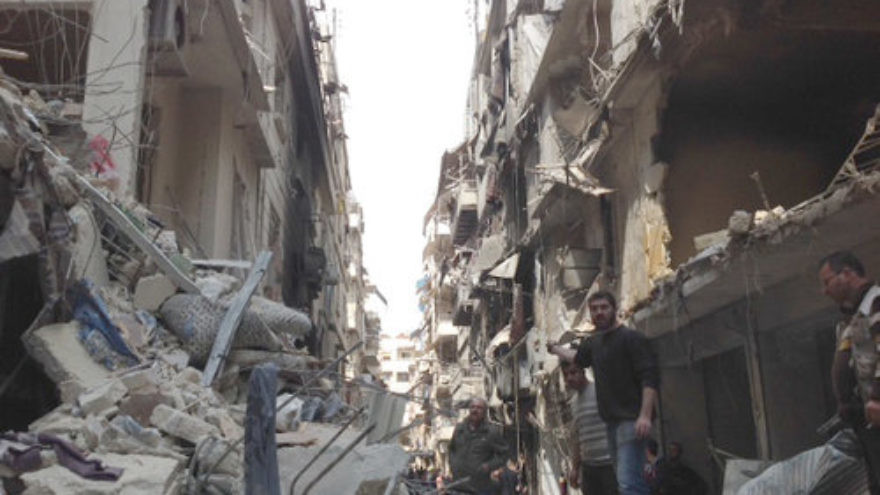 Damage to the Christian quarter of Aleppo, Syria, in January 2016. Credit: Aid to the Church in Need
Republish this article
1330 WORDS
Spread the word.
Help JNS grow!
Share now:

(December 23, 2016 / JNS) The recent military victory of Syrian government forces in Aleppo could prove to be a major turning point in the country’s bloody civil war, which has lasted nearly six years. Similarly, in Iraq, government forces backed by a U.S.-led coalition and Kurdish allies have been engaging in an operation to retake the city of Mosul from the Islamic State terror group.

Yet the major military operations in Syria and Iraq have come with the costs of devastation and immense human suffering. This has been especially true for the region’s minority groups, such as the Christians, who have been targeted for genocide by Islamic extremists while getting caught in the crossfire between more powerful Sunni and Shi’a Muslim governments and armies.

As such, upon the arrival of this year’s Christmas season, the ancient and dwindling Mideast Christian community still finds itself fighting for survival.

“This Christmas I pray we are meditating on that truth, thinking and praying for our brothers and sisters over there, and using our time with family to spread the message,” he told JNS.org.

Nicholson explained that while Christianity “has been an integral part of Upper Mesopotamia for 2,000 years,” the current combination of persecution, war, extremism and economic challenges “have left Syrian and Iraqi Christians at a crossroads, asking, ‘Should we stay or should we go?’”

The decline in the Christian populations of Syria and Iraq is stark. In Iraq, there were roughly 1.5 million Christians in 2003, and now there are only 300,000. Prior to the Syrian civil war in 2011, there were roughly between 1.5 and 1.7 million Christians in Syria, or roughly 10 percent of the country’s population. Now, Christian leaders in Syria estimate that roughly two-thirds of that minority population has fled and only about 500,000 remain, Chaldean Catholic Bishop of Aleppo Antoine Audo said earlier this year.

In war-torn Aleppo, which once had a Christian community of 250,000 people, only about one-eighth of that total remain.

“There were about 250,000 Christians and 45 churches in Aleppo prior to the siege. Today there are only about 30,000 Christians taking refuge in the western, [Bashar] Assad-controlled side of the city,” Nicholson said prior to Assad’s forces retaking the eastern half of the city.

Edward Clancy—director of outreach at Aid to the Church in Need (ACN), an international Catholic charity that assists people in need throughout the world, including in Syria and Iraq, where the group has provided more than $20 million through the auspices of the Catholic Church—told JNS.org that many of the remaining Christians in Aleppo “are stranded; many of them either can’t leave due to injuries, illness or age; or are stuck because of the constant warfare and devastation.”

“The reports we get from Aleppo are lack of power, food, water, basic sanitation and shelter. These are all things they are dealing with,” Clancy said. Aleppo, he added, was “one of the major commercial cities in the world in ancient times and on the Silk Road. It has long history with Christianity.”

Roots of Christianity in Syria

Indeed, the roots of Christianity in Syria go back to the earliest days of the faith, with the conversion of St. Paul on the road to Damascus between 33-36 AD, according to the New Testament. Even today, some Christians in Syria still speak Aramaic, the language spoken by Jesus. There is a rich mix of Christian denominations in Syria, with the Greek Orthodox Church being the largest, followed by the various Catholic and Armenian traditions.

Despite having constituting only 10 percent of the nation’s population, Syrian Christians played an outsized role in modern Syria and were long among the country’s elite. The founder of President Assad’s Ba’ath Party was a Christian, and Christians have served in numerous senior positions in the government and military forces. The strong position of Christians in Syria prior to the war was largely attributed to the fact that the last two governing regimes, of Bashar Assad and his father Hafez Assad, have been largely based on secular Arab nationalism and socialism.

As such, many of Syria’s Christians, despite the brutality of the current Assad government, have sided with the government during the civil war out of fear that the rebel forces, which include jihadist groups like Islamic State and al-Qaeda affiliates, would bring even greater suffering.

“The coming victory of Assad is being publicly welcomed by most Christian leaders who see him as a defender of Christians and other minorities against the forces of violent Sunni forces like ISIS and al-Qaeda,” the Philos Project’s Nicholson said.

“But that doesn’t mean they like him,” he said. “Private conversations reveal a deep concern about increasing Islamist sentiments around the region, both Sunni and Shi’a. Forced to choose between ISIS and Assad, Syrian Christians are simply choosing the least-bad option.”

“There is a common saying among some Middle Eastern Christians that goes, “Hassan aho Hussein.’ It means, ‘Hassan is the brother of Hussein,’ referencing two pivotal figures in Islamic history and implying that Sunnis and Shi’as are, at the end of the day, two sides of the same coin. Neither have historically been good for Christians,” Nicholson said.

In Nicholson’s estimation, American Christians “are largely disinterested in the plight of Christians in the Middle East. Recently, there has been growing interest, but by and large the American church—like the church worldwide—has been silent.”

Similarly, on a political level, the American government has been slow to respond to the crisis. Under pressure from Christian advocacy groups, Congress and later Secretary of State John Kerry in March officially recognized Islamic State’s atrocities against Christians, Yazidis and other regional religious minorities as genocide.

U.S. Rep. Chris Smith (R-N.J.), chair of the House of Representatives panel on global human rights and international organizations, visited Iraq right before the Christmas holiday to meet with families and Christian leaders.

“I met with Christian families who survived the ISIS genocide and have been ignored for two years by the Obama administration. I hope that President-elect [Donald] Trump will act urgently to make sure his administration helps these Christians with the funds Congress has approved for survivors of ISIS atrocities,” Smith said, referring to the Iraq and Syria Genocide Relief and Accountability Act of 2016 that he helped introduce.

ACN’s Clancy said he has been constantly “amazed at the resilience of the people” in Syria and Iraq. “They have gone through things that here in the U.S. we couldn’t even imagine or want to exist,” he said.

“In a conversation I had with the archbishop of Erbil, Iraq, I asked him why should we help these Christian people to remain with all this persecution. He said there was only one answer: It is a matter of faith,” said Clancy, recounting his talk with Archbishop Bashar Warda.

The archbishop, continued Clancy, noted how many Iraqi Christians are highly educated and would have strong career opportunities in the West, but still wish to stay in Iraq because it is their home.

“I think that is the kind of resilience we need to fortify in these people,” Clancy said. “I hope that they will be there for when the rebuilding starts, because these [Christian] communities are vital for the future of Iraq, Syria and all of the Middle East.”