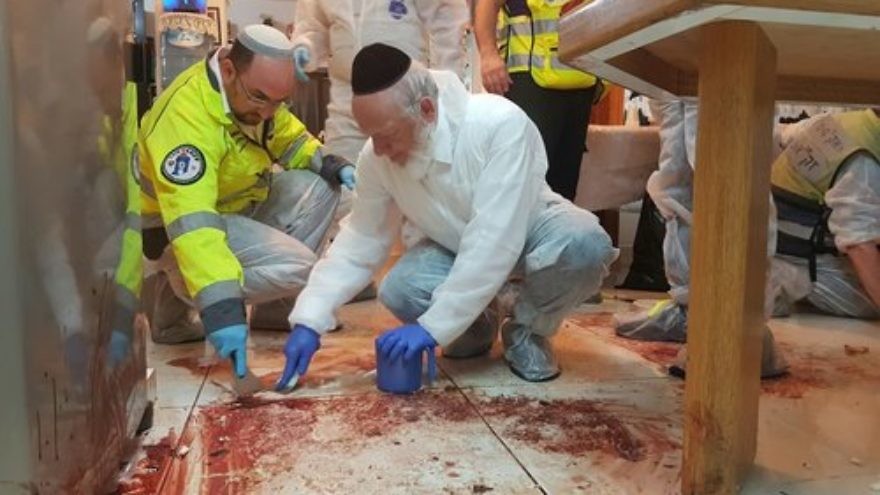 A Palestinian terrorist fatally stabbed an Israeli father and two of his adult children last Friday night in the Samaria community of Halamish, amid the tension over Jerusalem’s Temple Mount.

The terror attack in Halamish came on the heels of a Palestinian-incited “day of rage,” in which riots erupted after Friday prayers in response to the installation of metal detectors at the entrance gates to the Temple Mount. Israel had bolstered security following the July 14 Arab terror attack that killed two Israeli Druze policemen near the holy site. Ultimately, Israel decided Monday to remove the metal detectors in favor of “security measures based on advanced technologies.”

Several hours before initiating Friday night’s attack, 19-year-old Palestinian terrorist Omar al-Abed wrote on Facebook, “There is no life after what is seen in [the Temple Mount compound’s] Al-Aqsa [mosque].” Abed added, “All I have is a sharpened knife, and it responds to the call of Al-Aqsa…God will take revenge on you.”

The Jordanian-run Islamic Waqf, which administers the Temple Mount, is not “addressing Israel’s security needs, or that the metal detectors were installed as a result of terrorism coming out of the Temple Mount plaza,” said Dan Diker, director of the Political Warfare project at the Jerusalem Center for Public Affairs (JCPA), in comments before the metal detectors were removed.

Waqf officials are “expressing their sense of humiliation from having to go through these unilaterally imposed Israeli security measures, and they see this as a fundamental breaking of the status quo” at the holy site, Diker told JNS.org, adding, “If they perceive that their Islamic sense of honor is being crossed, it is a very difficult challenge [for Israel] to confront and overcome.”

At the same time, Diker said the current tension surrounding the Temple Mount “does not necessarily mean we are going towards a full-blown conflagration,” and that a further escalation in violence is “not self-evident.”

‘Scenes of a bloodbath’

The Palestinian terrorist, Abed, knocked on the door and burst into the Salomon family’s home as they gathered around the table for a festive Shabbat meal, celebrating the birth of a new grandson. As Abed entered, armed with a knife, Elad’s wife rushed a group of children to safety in a nearby room, holding the door shut while calling the police. The terrorist stabbed four members of the family before a neighbor, who overheard screaming, ran over and shot him.

“The scenes of a bloodbath that greeted us when we arrived on Saturday evening at the Salomon home shocked us all to the core—even the most veteran ZAKA volunteers,” Yehuda Meshi Zahav, chairman of the ZAKA emergency response group, told JNS.org. “It was painstaking work to gather up so much blood, but we were determined to finish so that the victims could be buried as soon as possible, in keeping with Jewish law.”

Abed, who was treated for his wounds at Rabin Medical Center in Petah Tikva, is in the Israeli defense establishment’s custody. He was arrested several months ago by Palestinian Authority security forces on suspicion of plotting terror attacks. An Israeli military official said the terrorist’s parents were known supporters of the Palestinian terror group Hamas.

Early Saturday morning, IDF troops raided the Abed family home in the village of Kaubar, searching for weapons and additional suspects. The IDF surveyed the home for demolition and arrested the terrorist’s brother, 21-year-old Monir al-Abed, on suspicion of aiding Omar in the attack.

Further, the IDF and Israel’s Shin Bet security agency arrested 29 Hamas members, including some of the terror group’s senior officials, in overnight raids in the disputed territories.

“The wave of detentions…was part of the preventive efforts of the Shin Bet security service and the Israel Defense Forces against the terrorist organizations, particularly during the past week and due to the tension surrounding the Temple Mount and the unrest in the area,” the Shin Bet said.

When news of the Halamish terror attack reached Hamas-controlled Gaza, jubilant Palestinians took to the streets to celebrate and hand out sweets. Hamas praised the “heroic” attack, while Palestinians in Gaza fired a rocket at the Israeli city of Ashkelon early Sunday morning. The rocket “exploded mid-air” and caused no injuries or damage, the IDF said.

Palestinian Authority (PA) President Mahmoud Abbas, meanwhile, announced the cancellation of security coordination with Israel as part of a general freeze in communication with the Jewish state. It was the first freeze of Israel-PA security cooperation announced by Abbas since he assumed office in 2005.

Regarding the escalation of Israeli-Palestinian tension, the JCPA’s Diker said, “Any time you have terror attacks against Israel, which puts Israel in the position of having to defend itself in terms of passive and active measures, it always looks like things are escalating.”

“We’ve learned from experience,” he said, “that these things don’t necessarily indicate that there’s going to be a major war.”