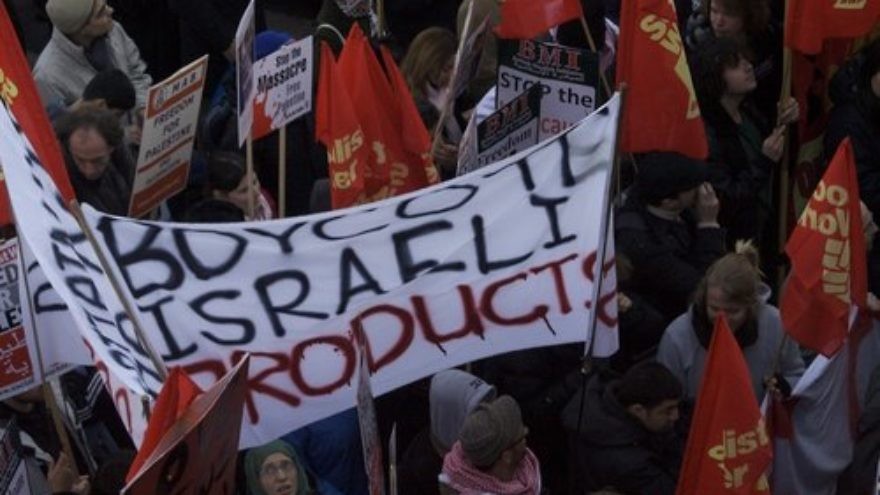 “It’s not really a movement—it’s just a tactic directed against Israel,” Dershowitz said in the opening remarks at a recent anti-BDS conference in Los Angeles. “I try to make the argument that it’s anti-peace and anti-two-state solution. If you’re in favor of peace and the two-state solution, you should fight against BDS.”

More than 250 people representing a variety of Jewish and pro-Israel advocacy groups gathered from March 4-6 for the “Combating the Boycott Movement Against Israel” conference, to exchange ideas and strategize in the face of the BDS movement’s multifaceted threat against Israel.

The Israel education organization StandWithUs has now hosted the annual anti-BDS summit for three years, described it as the first large-scale national conference devoted exclusively to the issue of tackling BDS.

Expert speakers highlighted the affect of BDS on businesses, communities, college campuses and the law. Peggy Shapiro, the Midwest director of StandWithUs, shared the story of a Palestinian man she met in Israel last year who works for an Israeli candy company in the West Bank. The man earns three times the prevailing wages of his neighbors. BDS campaigns often seek the removal of Israeli businesses from the disputed territories. Shapiro said that the man’s Palestinian friends and neighbors don’t chastise him—instead, they’re jealous of him, often asking how to get a job at the same company.

“We need the legislation to protect Palestinians, who are impacted first when Israeli businesses are forced to withdraw from their communities,” she said.

Eugene Kontorovich, a professor at Northwestern University School of Law, updated attendees on the progress of anti-BDS legislation on the state level in the U.S. At the time of last year’s conference in April 2016, a total of seven states had passed anti-BDS measures. Roughly one year later, that total is up to 16 states—across political leanings—with many of the bills passing unanimously.

Kontorovich addressed the constitutional concerns of free speech that are raised by critics of anti-BDS legislation in various states.

“What these laws deal with is what states have deemed to be discriminatory business conduct and practices,” he said. “When a company decides not to do business with someone because of its affiliation to Israel, it’s engaged in a form of impermissible bigotry and discrimination. The states are saying you’re allowed to discriminate. It’s America. You can discriminate. But we don’t have to subsidize your discrimination with taxpayer money.”

Tammi Rossman-Benjamin—director of the AMCHA Initiative, a nonprofit dedicated to documenting and combating campus anti-Semitism—recommended three steps against academic boycotts of Israel: increased documentation of faculty-level BDS promotion that violates university policy or state and federal laws; continued collaboration with pro-Israel faculty members; and pushing the U.S. Department of Education to identify pro-BDS teaching as anti-Semitic.

“These recommendations are not meant to be exhaustive, but are offered as food for thought and to challenge us all to think more strategically about how to crack this tough nut,” she said.

One of the overarching themes of the conference was a push for pro-Israel outreach to minority groups. Ron Krudo, executive director of campus affairs for StandWithUs, noted that campus groups such as Students for Justice in Palestine have successfully recruited allies such as Black Lives Matter and LGBTQ groups by portraying support for BDS as a human rights issue.

“Students active in student government truly believe they’re fighting for human rights,” Krudo said. “Pro-BDS groups have been really effective at lobbying student leaders, but we’ve gotten better at it….We’ve worked with many of our partners to strategize how to better lobby student leaders in these cases. We’ve been able to overcome a majority of [pro-BDS] resolutions on college campuses.”

“It’s just a simple way of academically justifying anti-Semitism and anti-Zionism by saying the world is divided into the oppressed and the oppressor,” he said.

StandWithUs CEO Roz Rothstein told the Haym Salomon Center that the anti-BDS community is “growing and getting smarter” as a result of the annual conference.

“Our students and young people feel much more supported,” she said. “Our professionals are making really great connections for the future. Everybody really got a lot out of the conference. That’s what everybody here keeps telling me.”

Oren Peleg is a contributor to the Haym Salomon Center news and public policy group.