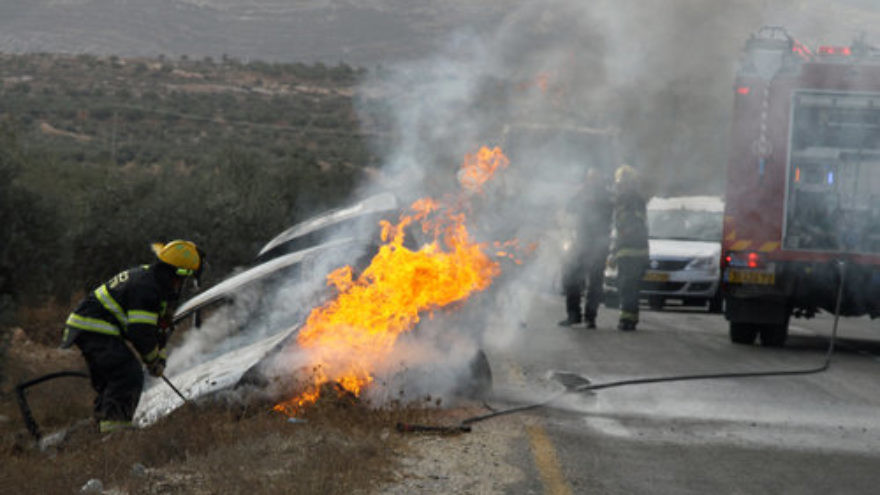 Firefighters put out a blaze from a burning car belonging to Israeli Jews near the West Bank village of Tuqua on Nov. 8, 2013. In the attack, an Israeli woman sustained light-to-moderate wounds, and one of her children was lightly injured, after a firebomb was hurled at their vehicle near Tekoa in Gush Etzion. Credit: Gershon Elinson/Flash90.
Republish this article
592 WORDS
Spread the word.
Help JNS grow!
Share now:

A group of Palestinians tried to burn some Israeli Jews to death March 23. Just another day in the Middle East.

The four attackers drove up to the perimeter of the Jewish community of Beit El, north of Jerusalem, and began hurling firebombs toward homes there. A firebomb, also known as a Molotov cocktail, is of course a deadly weapon. It explodes on impact and unleashes a torrent of flames. We can all easily imagine what would happen if those firebombs had struck people or homes.

Fortunately, Israeli soldiers immediately fired at the would-be murderers, killing one and wounding three others. That should be the end of the story. But it won’t be. Here’s why.

To begin with, one of the terrorists was 17 years old. That means “human rights” groups will add him to their list of “Palestinian children killed by Israelis.” Even if a killer is just one day shy of his 18th birthday, that’s good enough to define him as a “child” in the eyes of those who want to smear Israel.

The fact that a Palestinian died, while no Israelis were burned to death as he had intended, meant that many news outlets portrayed the attacker as the victim. This is in accordance with the theory that whoever dies must be the victim and whoever killed him must be the aggressor. (Good thing the media didn’t use that measuring stick during World War II!)

Consider, for example, the story as presented by AFP, a major supplier of international news. Here’s how it began: “Israeli troops shot dead a Palestinian teenager Thursday in the occupied West Bank and seriously wounded three other Palestinians, the Palestinian health ministry said in a statement.”

And here’s how the AFP story explained the broader context: “A wave of violence that broke out in October 2015 has claimed the lives of 257 Palestinians, 40 Israelis, two Americans, one Jordanian, an Eritrean, and a Sudanese national, according to an AFP count.” Notice how the violence just “broke out,” like a mysterious illness with no obvious culprit.

Here’s something else that few in the mainstream media will report: the Palestinian Authority’s (PA) immediate endorsement of the terrorists who tried to burn Jews alive.

According to the Palestinian news agency Ma’an, the governor of de facto PA capital Ramallah, Laila Ghanam, called the dead terrorist “a martyr.” She also tried to spread some fake news, declaring that the gang of four “had been driving peacefully” when cruel Israelis attacked them. “This is another crime,” the PA governor proclaimed. She also said “we wish a quick recovery” to the three wounded terrorists, presumably so they can resume trying to set Jews on fire.

You won’t read Ghanam’s remarks in The Washington Post or hear them quoted on CNN. That would remind the American public that Palestinian leaders support burning Jews to death, and publicly lie to cover for the would-be killers. And that would undermine the campaign to give the firebomb-throwers a sovereign state in Israel’s backyard.