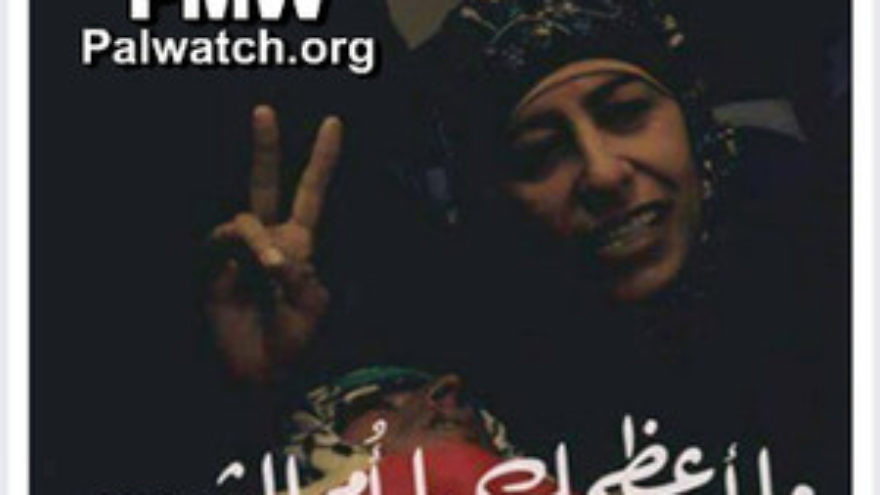 In this photo published on the Facebook page of the Palestinian Fatah faction, the mother of late Palestinian terrorist Muhammed Shamasneh makes a “V” sign with her right hand. The caption reads, “How great you are, O mother of the Martyr.” Credit: Palestinian Media Watch.
Republish this article
569 WORDS
Spread the word.
Help JNS grow!
Share now:

“I am proud of my son,” the father of 16-year-old Morad Adais, of the Palestinian village of Dura, declared this week.

What do you suppose was the occasion for this burst of parental pride? What was it that young Morad did which so pleased his father? An impressive report card? Helping with home repairs? Taking care of younger siblings?

No, what Morad did to bring honor to the Adais family was that he broke into the home of a young Israeli Jewish mother of six and brutally stabbed her to death.

Not that the elder Adais is the exception. On the contrary, his response is the rule in Palestinian society.

Just two weeks ago, the official Facebook page of the Fatah movement posted a large photo of another Palestinian parent expressing pride at the deeds of a murderous child. On Jan. 5, Fatah published a photo of the mother of the late Muhammed Shamasneh. She is smiling broadly and making a “V” sign with her right hand. The caption under the photo reads: “How great you are, O mother of the Martyr.”

Shamasneh, 22, was a Palestinian terrorist who stabbed three Jews near the Jerusalem central bus station last Oct. 12, and then was shot by the police. Fatah, which is glorifying Shamasneh, is chaired by Mahmoud Abbas, who is also president of the “moderate” Palestinian Authority (PA).

Then-president Bill Clinton epitomized this attitude when he met with Israeli parents of terror victims on Dec. 15, 1998, and then traveled to Gaza to meet with Palestinian parents of imprisoned terrorists. The president told reporters: “If I had met them in reverse order, I would not have known which ones were Israeli and which Palestinian.”

The problem is not just individual Palestinian parents endorsing their children’s terrorism. The problem is that the official Palestinian leadership actively encourages such attitudes. Consider how the PA’s Minister of Women’s Affairs, Haifa Al-Agha, recently explained the “uniqueness” of Palestinian women: “The Palestinian women’s uniqueness differentiates her from the women of the world, as [only] she receives the news of her son’s Martyrdom with cries of joy.”

Her statement appeared in the official daily newspaper of the “moderate” PA, Al-Hayat Al-Jadida, on Nov. 7, 2015. Such declarations appear in the official PA news media every day. They send a very specific message to the Palestinian public; and it’s clear that the message has been received, loud and clear.

As much as we wish that the Palestinians were moderate, reasonable people who hate violence and terrorism and would live in peace with Israel if they were just given a state of their own, they keep demonstrating, through their words and deeds, exactly the opposite.