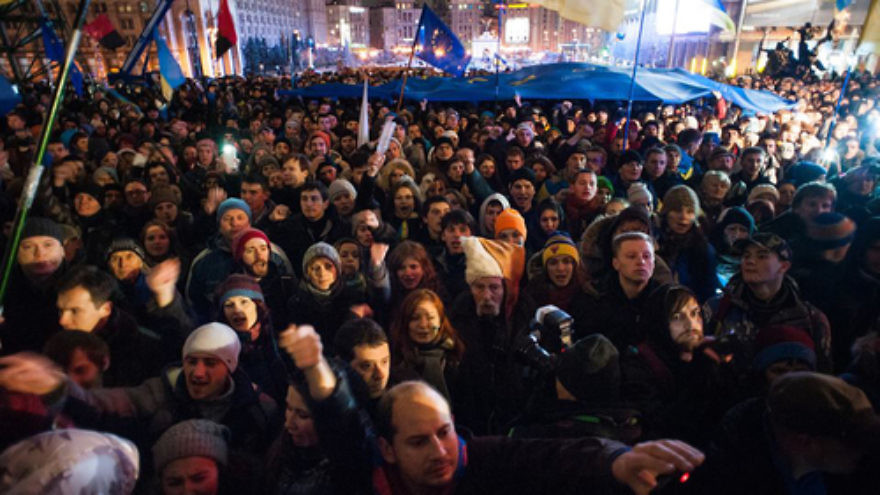 A “Euromaidan” protest on Nov. 27, 2013 in Kiev, Ukraine. Due to the ongoing protests, which began over Ukrainian President Viktor Yanukovych’s decision to freeze plans to join a free trade agreement with the European Union, some Ukrainian-Jewish leaders canceled events out of fear that Jews may be targeted. Credit: Mstyslav Chernov via Wikimedia Commons.
Republish this article
937 WORDS
Spread the word.
Help JNS grow!
Share now:

Two violent anti-Semitic incidents that took place in Kiev, Ukraine, over the course of a week have alarmed the Ukrainian Jewish community. Some experts speculate that the events could be related to the political conflict that has engulfed the country since November 2013.

On Jan. 11, several men attacked Hillel Wertheimer, an Orthodox Jewish and Israeli teacher of Hebrew and Jewish tradition, after he left a synagogue at the end of Shabbat. On Jan. 18, a yeshiva student, Dov-Ber Glickman, was severely attacked by men with their fists and legs on his way home from a Shabbat meal.

According to the general Euro-Asian Jewish Congress (EAJC) General Council, the combat boots of Glickman’s attackers may have been outfitted with blades. Glickman dragged himself to a nearby synagogue’s ritual bath, where he was discovered and taken to a hospital. Glickman told IDF Radio on Sunday that “people are now afraid to leave their homes.”

“The frightening thing is that [the attackers] arrived by car, and were apparently organized,” Hillel Cohen, chairman of the Hatzalah Ukraine emergency services group, told Yedioth Ahronot.

In an additional incident on Jan. 18, yeshiva students detained a suspicious individual who, according to the students, was found to possess a detailed plan of the surrounding neighborhood.

Sam Kliger, the American Jewish Committee’s (AJC) director of Russian Jewish community affairs, believes the incidents could be a “sinister sign indicating that some are trying to use anti-Semitism in political confrontation in Ukraine.”

“Historically in this part of the world, a political confrontation sooner or later starts to exploit the ‘Jewish question’ and to play the Jewish card,” Kliger told JNS.org in an email.

Jan. 19 saw an intensification of the Maidan protests, which have been taking place intermittently since November. On Jan. 21, demonstrators clashed with police forces by catapulting Molotov cocktails. Police forces fired rubber bullets and smoke bombs. About 30 protesters were detained. Two-hundred people were injured and vehicles were torched, Bloomberg News reported.

In November, when the “Euromaidan” protests first began in Kiev’s Independence Square in opposition to Ukrainian President Viktor Yanukovych’s decision to freeze plans to join a free trade agreement with the European Union, some Ukrainian-Jewish leaders had canceled events out of fear that Jews may be targeted, especially since the ultra-nationalist Ukrainian political opposition party Svaboda, which is viewed as an anti-Semitic and neo-Nazi group by various Jewish organizations, was participating in the protests. But there was little indication of anti-Semitism among protesters at the time.

Given the two recent violent attacks on Jews, there are some who suggest that “some pro-governmental forces are behind the attacks in order to then blame the nationalists and ultra-nationalist groups associated with Maidan protesters to denounce their legitimacy,” Kliger told JNS.org.

“Yet another version suggests the opposite, namely that some radical groups like neo-Nazis and ultra-nationalists are behind the attack, which they then can blame on the government,” Kliger said.

Historian, politologist, and EAJC member Vyacheslav Likhachev said in an EAJC op-ed published Jan. 19 that the former is more likely than the latter.

“The large-scale civil protests known under the title ‘Euromaidan’ really do include groups of radical youths whose slogans and actions repel even the nationalistic All-Ukrainan ‘Svoboda’ Union Party,” Likhachev wrote. But he also wrote that such activists have been heavily occupied with protecting the center of the Maidan protests and preparing for confrontations with government forces. On Jan. 20, President Yanukovych agreed to form a cross-party commission to try to bring an end to the conflict, but the opposition may not participate in talks without the president, according to reports.

“Considering the general direction of what is happening on the Maidan, I believe that even the most thuggish of the protesters are not interested in Jews at the moment,” Likhachev wrote.

But since the Ukrainian government has been portraying protestors as a threat to minorities, according to Likhachev, pro-government forces may be instigating anti-Semitic incidents to then be able to blame the protesters for them.

“It is possible that the second, more cruel incident happened due to the first not having enough resonance in the media,” although “15 years of experience in monitoring hate crimes tell me that usually hate crime is just a hate crime and not an element of some complex and global political plot,” wrote Likhachev.

Josef Zisels, chairman of the Association of Jewish Organizations and Communities (Vaad) of Ukraine, emphasized in an official statement translated from Russian that the anti-Semitic attacks were synchronized with the adoption of new legislation initiated by Yanukovych late last week that outlaws many forms of protests. The law bans wearing hardhats or masks, building tents or stages, and disseminating “extremist information” about the Ukrainian government.

“Journalists and public figures, including those acting on behalf of the Jewish community, rushed without any factual basis to tie the assaults with the campaign of peaceful civil protests,” Zisels said in the statement.

“Based on the fact that now the topic of anti-Semitism is being used heavily in the cynical political technology campaigns aimed at discrediting the political opposition and the public protest movement, the Jewish community must remain increasingly vigilant,” he said.

Both AJC and The National Conference Supporting Jews in Russia, Ukraine, the Baltic States & Eurasia (NCSJ) issued statements condemning the anti-Semitic attacks and asking the Ukrainian government to investigate the incidents and bring the perpetrators to justice.

NCSJ Executive Director Mark Levin told JNS.org that “no one really knows the full truth” yet about who is responsible for the attacks, but that he is not surprised by the incidents.

“Anti-Semitism unfortunately remains an issue in Ukraine. It ebbs and flows,” Levin said.