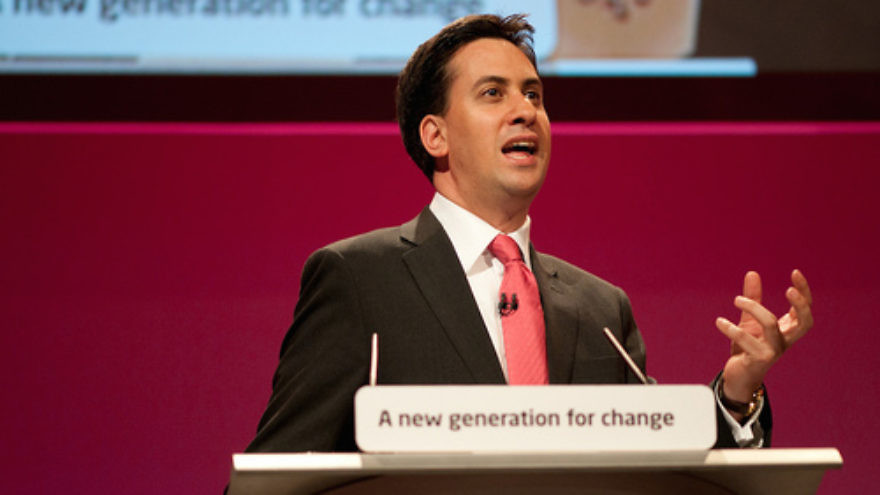 Ahead of the British election, Labour Party leader Ed Miliband (pictured), who is Jewish, has drawn criticism from his own religious community for his party's support of a Palestinian state. Credit: Ed Miliband - Flickr via Wikimedia Commons.
Republish this article
1492 WORDS
Spread the word.
Help JNS grow!
Share now:

(April 23, 2015 / JNS) Rising anti-Semitism and the issue of Palestinian statehood will be among the factors in the equation for Jewish voters when the United Kingdom heads to the polls on May 7 to determine the country’s next ruling political party and prime minister.

The election’s two major contenders are the Conservative Party, led by current Prime Minister David Cameron, and the left-leaning Labour Party, led by Member of Parliament (MP) Ed Miliband. In the voting booth, British citizens will only choose an MP to represent their local constituency. After all votes are counted, the party that musters a majority of MPs in the House of Commons legislature will form the national government. That party’s leader usually becomes prime minister.

Leading up to the election, different polls indicate that the Conservative and Labour parties are likely to finish with a similar number of seats. If neither party musters a majority of seats in the House of Commons, a coalition will be needed to form the government. The race also includes the Liberal Democrats, the Scottish National Party (SNP), the U.K. Independence Party (UKIP), the Green Party, and other parties.

In a recent poll conducted by London’s Jewish Chronicle newspaper, 69 percent of Jewish voters said they would support the Conservative Party, compared to 22 percent for Labour. Only 13 percent of respondents expressed support for Miliband, who is Jewish, while 64 percent supported Cameron.

Dr. Daniel Staetsky, a researcher for the London-based Institute for Jewish Policy Research (JPR), told JNS.org that while British Jews “are less right-leaning than what can be expected on the basis of their socio economic status… [their] right-leaning is not new.”

Miliband has been heavily criticized by his own religious community due to Labour’s stances on Israel, including introducing a non-binding legislation last year calling on the U.K. to recognize Palestinian statehood. The British parliament then voted symbolically, 274-12, in favor of requesting that the U.K. recognize a unilaterally established Palestinian state. More recently, Miliband said he would support the recognition of a Palestinian state if that move would help bring about an Israeli-Palestinian peace deal.

“The British Labour Party historically had strong links with Israel and was a loyal supporter,” said Jonathan Walker, president of the U.K.-based Anglo-Jewish Association. But nowadays, he told JNS.org, “the political left has sided with the Palestinian cause and taken an aggressive anti-Zionist/anti-Israel position.”

Walker noted the “We Are All Hamas” slogan during British rallies against Israel’s Operation Protective Edge in Gaza last summer, compared with a “conspicuous silence on other international matters—no rallies, campaigns, etc.”

Given this climate, Walker said, “Ed Miliband is not generally felt to be a reliable supporter of Israel by Jewish British voters we (the Anglo-Jewish Association) have spoken to. In contrast, the Conservatives have been solid supporters of Israel, though not blindly—where they see place for criticism, they are vocal.” For instance, the Conservatives did criticize Israeli airstrikes that hit United Nations facilities during Operation Protective Edge.

Fiona Sharpe, an activist with Sussex Friends of Israel—a grassroots advocacy group with members across the political spectrum working to support Israel and combat anti-Semitism—told JNS.org that Jewish voters in the U.K. are concerned about Miliband’s views on Palestinian statehood. While supporting a two-state solution is an “admirable position,” Sharpe said, “the notion that he would force a political solution on Israel is a little unfortunate.”

But Jim Murphy, who leads the Scottish Labour Party and is an MP for the East Renfrewshire constituency, earlier this month disagreed with the notion that a Miliband-led government would not be friendly to Israel.

“I’ve spoken to Ed about this and I don’t have any doubts… about his determination to set aside time to make sure there’s a genuine effort for a two-state solution, which respects Israel’s security needs and honors the Palestinians’ entirely legitimate and overdue right to a state,” Murphy told the Jewish Chronicle.

Sharpe, however, told JNS.org that for the Jewish community, “what is of greater concern and a much more immediate concern is the issue of anti-Semitism.”

A poll conducted by YouGov in January showed that nearly half of the British population agreed to one of four anti-Semitic statements relating to Jewish loyalty, common stereotypes about Jews, and Jewish use of the Holocaust as a means to gain sympathy. Additionally, a survey released in February by the British watchdog group Community Security Trust showed that anti-Semitic incidents in the U.K. reached their highest-ever levels in 2014.

Miliband recently vowed “to confront the scourge of anti-Semitism and Islamophobia head on with strong action on hate crimes,” the London-based Jewish News reported. Just days later, Cameron told The Atlantic that he would be “heartbroken” if “people in the Jewish community thought that Britain was no longer a safe place for them.”

Cameron further stated, “You’ve got the poisonous narrative of Islamist extremism, which is targeting Jews generally. You’ve got specific attacks in Europe. And you have the rise of anti-Semitism on campuses or in public life, including sadly in Britain in some cases. Plus, you’ve got the issue of delegitimization being pushed, the boycotts of the state of Israel by universities and the like, and soon you add all these things up and you can see why some in the Jewish community are very concerned.”

Sharpe believes Miliband has “not been as forthcoming and outright in his condemnation of anti-Semitism as David Cameron.”

Meanwhile, the right-wing UKIP party—which had two House of Commons members prior to the dissolution of the U.K. Parliament on March 30 and is currently supported by about 13 percent of U.K. voters, according to recent polls—presents a conundrum for Jewish voters. The party advocates for the U.K. to leave the European Union and reduce immigration, and has been accused of racism, particularly against Muslims. UKIP won the most seats among British parties in the 2014 European Parliament election, the first time a U.K. party has outperformed the Conservatives and Labour in any British election.

UKIP’s comments on immigration “should really make the blood of all Jewish people run cold, being that we are all a generation away from being immigrants ourselves,” Sharpe said.

In YouGov’s polling, UKIP voters were more likely to agree with anti-Semitic statements than Conservative and Labour voters, noted JPR’s Staetsky. On the other hand, UKIP voters showed the highest proportion of pro-Israel views in a different YouGov survey that focused on the Israeli-Palestinian conflict, said Staetsky.

Last December, UKIP House of Commons MP Douglas Carswell said that “no country better embodies the idea of national self-determination than Israel,” the Jewish News reported. UKIP leader Nigel Farage, a member of the European Parliament, has criticized the “strong bias” against Israel within the European Union and said that UKIP “fundamentally believes in Israel’s right to exist and sympathizes with it because it finds itself in a horrid position,” the Jerusalem Post reported.

Those remarks sharply contrast with the Green Party, whose leader, Natalie Bennett, recently told the Jewish Chronicle that “the boycott of Israel is Green Party policy.”

Sharpe told JNS.org that smaller parties like UKIP and Green have “very little impact” on the actual election, but do put “ideas out into public discourse.”

SNP is the third-largest party in the House of Commons. Its leader, Nicola Sturgeon, recently called for the next U.K. government “to pursue a two-state solution for Israel and Palestine and to support the formal recognition of a Palestinian state.”

The Liberal Democrats, meanwhile, have condemned “Hamas’s rocket attacks and other targeting of Israeli civilians,” but have also criticized “Israel’s continued illegal policy of settlement expansion, which undermines the possibility of a two-state solution.” The party also said it is “determined to combat anti-Semitism and anti-Muslim hate in the U.K. and internationally.”

Sharpe believes that politicians’ campaign rhetoric doesn’t necessarily translate into actual policy. The U.K. “has never taken a leading role in the peace process in Israel, and there’s nothing to suggest that after this election they will do that all of a sudden now,” she said.

It is also misleading to suggest that British Jews vote only based on the Israeli-Palestinian conflict and anti-Semitism, according to Sharpe, who described the U.K. Jewish community as “not a one-issue constituency.”

Despite the rise in British anti-Semitism, Sharpe said, “I think that Jews on the streets of England are still very safe. I think we have a police system and a legal system that is rigorous and robust, and protects all minorities.”