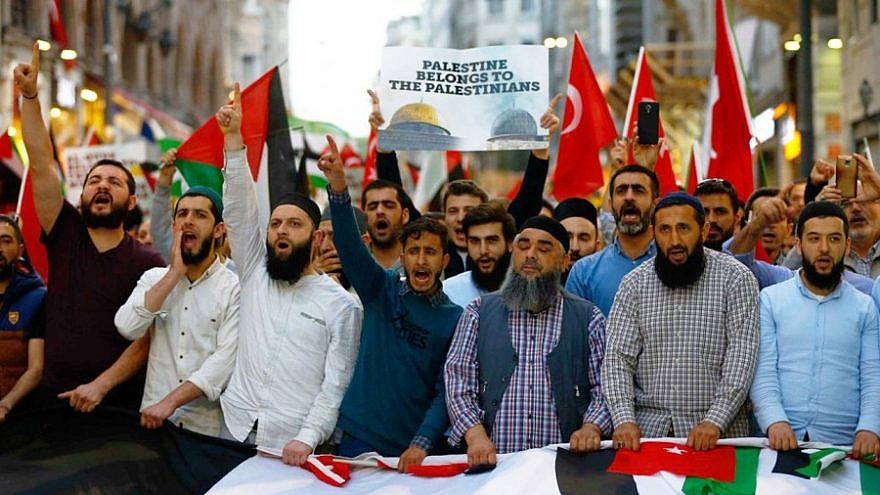 (November 11, 2020 / JNS) The decision by three Arab states to make peace with Israel can be credited both to efforts by the Trump administration and the recognition by these Sunni states that their security would improve against the ongoing threats they face from Turkey and Iran.

Turkey and Iran look to overthrow the Sunni Arab states that do not align with them, such as Saudi Arabia and other Gulf states. The normalization deals between the United Arab Emirates, Bahrain and Sudan have greatly upset Turkey and Iran, which ideologically view Israel as the enemy.

“Iran is a tactical enemy for the Gulf states because the regime is controlled by Shi’ite fanatics who want to destroy the Sunni regimes in the Gulf,” Harold Rhode, a longtime former adviser on Islamic affairs in the U.S. Defense Department of Defense who was in Iran during the early months of the Iranian Islamic Revolution, told JNS.

“Iran, but even more so Turkey, was certainly a major impetus for the Gulf state deals with Israel.”

Israel’s burgeoning alliance with the Gulf Arab states reverses the situation the Jewish state had found itself in during the first few decades of its existence. In its early years during the successive Arab-Israeli conflicts, it relied on an alliance of non-Arab states, such as Turkey and Iran, as its only regional allies. However, this all began to change when the pro-Western Shah of Iran was overthrown in the Islamic Revolution in 1979 and has increased under the Islamist anti-Israeli policies of Turkey’s President Recep Tayyip Erdoğan.

Rhode predicts that if the Iranian people successfully toppled the current regime, it would most likely be transformed into a country focused on rebuilding and re-establishing its connections with the world.

The Turkish threat to Arab regimes

Hay Eytan Cohen Yanarocak, an expert on Turkey at the Moshe Dayan Center at Tel Aviv University and the Jerusalem Institute for Strategy and Security, told JNS that Turkey and the Gulf Arab states are engaged in an undeclared proxy war in Libya and the Eastern Mediterranean.

“Almost in every theater, Turkey, Qatar and Hamas are challenging the United Arab Emirates, Saudi Arabia and Egypt,” said Yanarocak. “From Turkey’s perspective, Egyptian President Abdel Fattah el-Sisi lacks legitimacy due to the military take over from the Muslim Brotherhood.”

Saudi Crown Prince Mohammed bin Salman is seen by the Islamist powers as illegitimate for his government’s assassination of slain journalist Jamal Khashoggi in 2018 at the Saudi consulate in Istanbul, added Yanarocak.

“And now, the UAE lacks legitimacy in their eyes because of normalization with Israel,” he asserted.

In other words, continued the expert, “in Turkey’s eyes, the Gulf states are not considered ‘kosher’ for leading the Sunnis.”

Rhode says that “from the Gulf states’ perspective, Turkey is their long-term strategic enemy because Sunni fundamentalism—today headed by Turkish President Tayyip Erdoğan—has been a perennial nemesis throughout Islamic history by assassinating or overthrowing Sunni Arab leaders.”

“This is because Erdoğan is the de facto leader of the Muslim Brotherhood, whose goal is to re-establish the Sunni Caliphate and destroy all Sunni leaders who don’t agree with its goals,” said Rhode. “Iran, but even more so Turkey, was certainly a major impetus for the Gulf state deals with Israel.”

Like the UAE, Bahrain, Saudi Arabia and others, Israel shares the same long-term enemy as they do, which is the Muslim Brotherhood, “which is nothing more than the latest version of Sunni Islamic fanaticism which has periodically wreaked havoc with Sunni regimes throughout Islam’s 1,400-year history,” he added.

More Sunni Arab states are reportedly likely to follow in the footsteps and normalize relations with Israel. For them, the Israel-Palestinian conflict is not one of their priorities, and there are no territorial conflicts with Israel.

When it comes to the Gulf states’ views of the Palestinians, the Sunni Gulf Arabs are furious with the Palestinian leadership for shaming them for making peace deals with Israel, continued Rhode, adding, “culturally, shaming in the Middle East is worse than killing them.”

It’s also to be noted that protests or unrest did not take place in the UAE or Bahrain as a result of signing the agreements with Jerusalem.

“In fact,” assessed Rhode, “the people welcomed it. They are sick and tired of the Palestinian mafia thugs threatening them, and they called the Palestinian bluff. Gulf Arabs are now just expressing what they have felt privately for a long time, but had rarely expressed publicly.”