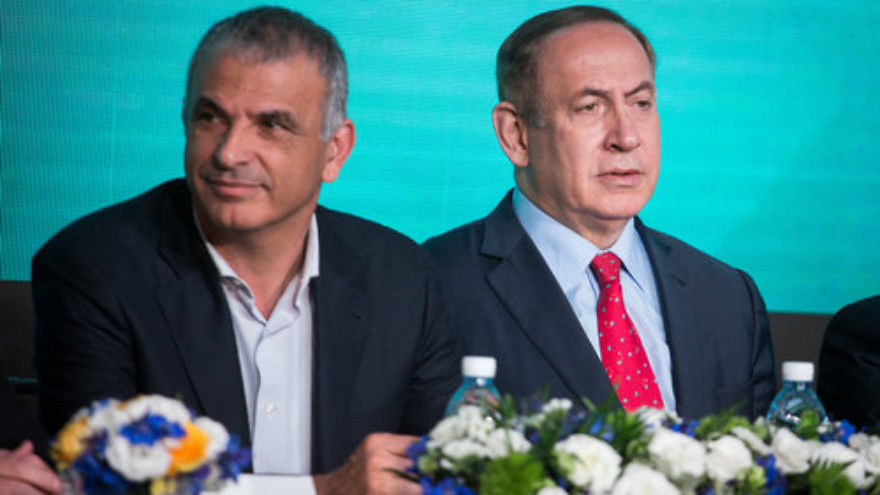 (April 26, 2017 / JNS) Israeli Finance Minister Moshe Kahlon last week announced a series of tax reforms aimed at assisting the middle class, taking advantage of an unexpected government surplus of tax revenue. While Kahlon’s “Net Plan” may provide relief for some Israelis having difficulty coping with the country’s high cost of living, the plan raises questions about the appropriate usage of the budget surplus and whether the finance minister was motivated by scoring political points.

The plan was publicized just hours after Kahlon called a surprise press conference. Noticeably absent from the event was Prime Minister Benjamin Netanyahu, who reportedly was blindsided by the announcement of the press conference.

Through his maneuver, made amid ongoing rumors of early elections in Israel, Kahlon may have sought to take maximum credit for the populist reforms without sharing any spotlight with the prime minister.

“My impression is that this is perceived as a bold act on the part of Kahlon,” said Gilad Brand, a researcher at the Taub Center for Social Policy Studies in Israel.

Netanyahu did not offer any immediate public endorsement for the Net Plan, while sources close to the prime minister expressed careful support by saying it “was in the right direction and will be approached positively.”

Best use of the tax surplus?

While both Kahlon and Netanyahu are generally proponents of lowering taxes, using a temporary surplus in tax revenue to implement a tax policy that is intended to be ongoing “raises major concerns,” Brand told JNS.org.

“If the policymakers are interested in redistributing resources, they should allocate a permanent budgetary source for this,” he said.

Further, Brand suggested the surplus could instead be saved for a rainy day.

“Economic theory and historic experience has taught us that at such times, government should accumulate resources that will be pumped back into the economy in times of a recession,” he said.

If the government was intent on utilizing the funds, rather than passing the surplus back to the public, “it may have been a smarter move to use the funds in order to decrease the national debt,” said Brand.

Yet balancing the budget, even if fiscally sound, would be unlikely to garner praise from a population that continuously struggles with Israel’s high cost of living. According to Brand, the Net Plan targets “Kahlon’s potential constituency: low-income working families with young children.”

Member of Knesset Yoav Kisch, who is part of Netanyahu’s Likud party and chairs the Joint Committee for the Knesset Budget, cautioned during an interview on Army Radio that regardless of public support for the Net Plan, “without the support of the prime minister and Likud, the plan cannot get the go-ahead.

“Some of the steps require legislation and Kahlon may be forced to make changes in his plan in order to push it through, so the final result is yet to be seen,” Brand said.

Are elections on the horizon?

The public spats between Netanyahu and Kahlon have jumpstarted polls gauging Israelis’ readiness for new elections and the prospects for replacing Israel’s second-longest serving prime minister.

A poll presented Saturday on Israel’s Channel 2 revealed that only 33 percent of Israelis are satisfied with Netanyahu’s performance. Yet the same poll showed that if new elections were held today, the prime minister’s Likud party would lose just two of its 30 seats in the legislature, while the Yesh Atid party—led by former television anchor Yair Lapid, who served as Finance Minister in Netanyahu’s previous governing coalition—would rise from 11 Knesset seats to 25. According to the poll, Yesh Atid’s gains would predominantly come at the expense of all other Jewish parties in the parliament, including Kahlon’s Kulanu party.

A survey conducted this month by the Israel Democracy Institute (IDI) and Tel Aviv University (TAU) found that if elections were held soon, 70 percent of Israelis would want a right-wing or center-right government to take office, seemingly mirroring the makeup of Israel’s current government. By contrast, only 24 percent would prefer a center-left or left-wing government.

In an even more revealing finding, 81 percent of Jewish respondents said that regardless of their personal preferences, they believe a right-wing or center-right government stands the best chance of being elected, while 8 percent say a left-wing or center-left government could win.

Tamar Hermann, a professor of political science at Open University of Israel and a senior fellow at the IDI, told JNS.org that “even if the public is not crazy about the government’s every move, in general the current government represents the direction desired by the overall majority of the public.”

While members of Netanyahu’s government may be at odds with one another, with disagreements increasingly playing out in public and stoking threats of early elections, coalition members may be forced to recognize that their strongest position is the status quo.

“The [IDI/TAU] survey made clear what we already knew,” Hermann said, “that the public is not interested in going to elections and replacing the current government.”