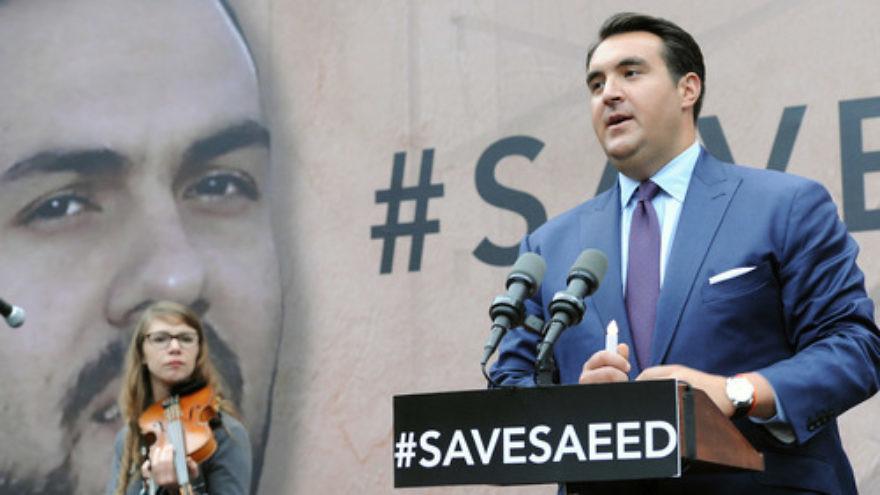 Click photo to download. Caption: Jordan Sekulow, executive director of the American Center for Law and Justice, speaks to a crowd gathered outside the White House on Sept. 25, 2014, to pray for the release of Pastor Saeed Abedini from prison in Iran. Abedini was eventually freed in January 2016. Credit: American Center for Law and Justice.
Republish this article
1338 WORDS
Spread the word.
Help JNS grow!
Share now:

While a high-profile Christian pastor gained his freedom as part of Iran’s recent release of five American hostages, the persecution of Christians in Iran rages on with no end in sight and no indication that Iranian President Hassan Rouhani is even considering the release of about 100 Christians imprisoned for believing in a faith other than Islam.

On Jan. 16, Iran freed four Americans in a prisoner swap and a fifth in a separate release, in transactions that most reports linked to the implementation of last summer’s nuclear deal. Among the newly released Americans was Pastor Saeed Abedini, who was imprisoned for three and a half years in Iran and received global support during that time, including legal aid from the American Center for Law and Justice and the advocacy of famed pastors like Franklin Graham. Abedini was arrested by Iran’s Islamic Revolutionary Guard Corps while visiting relatives and building an orphanage.

While Abedini’s long-awaited release brings joyous relief to many Christian communities around the world, there is much concern for the still-imprisoned Iranian Christians who face the prospect of execution or torture.

“While Iranian officials allowed Pastor Abedini to board the plane and put this horrible ordeal behind him, they continue to hold dozens of Iranian Christians on vague and overly broad national security charges like ‘propaganda against the system.’ These detentions clearly violate not only Iran’s obligations under international law, but their own constitution,” Heiner Bielefeldt, the United Nations special rapporteur on freedom of religion or belief, said in a statement.

Christians in Iran have been persecuted since the 1979 rise of the country’s theocratic Shi’a Muslim government, whose goal is to root out all Western influences that it claims threaten Islamic identity. When Mahmoud Ahmadinejad was elected president in 2005, the threat of death, lashing, and torture intensified for Christians. Under Rouhani’s leadership, the U.N. has reported that religious oppression is even greater than it was under Ahmadinejad. Iranian Supreme Leader Ayatollah Ali Khamenei said in 2010 that Iran’s underground house churches “threaten the Islamic faith and deceive young Muslims.”

Open Doors UK, a British organization supporting the persecuted Christian church in more than 50 countries, estimates that there are 475,000 Christians living in Iran. Others say it is a challenge to determine precise figures.

“There are 300,000 to 400,000 Christians currently living in Iran, with an additional unconfirmed number of converts from a Muslim background living in secrecy. It’s difficult to obtain more precise numbers as access into Iran for human rights organizations is almost entirely closed off,” Isaac Six, the advocacy director of International Christian Concern (ICC), told JNS.org.

ICC, which seeks to combat the persecution of Christians, said there are “approximately 100 Iranian Christians imprisoned or on trial because of their religious affiliation. We also just received unconfirmed reports this week of another 24 Christians being detained, which may bring the total higher.”

Another ministry specifically dedicated to helping the church in Iran confirmed to JNS.org that the arbitrary arrests of Iranian Christians continue, yet the size of the country’s Christian population is increasing. While 95 Iranian Christians are currently arbitrarily imprisoned, “history shows us that as the church is persecuted, it grows,” said a coordinator for the ministry, which asked to remain anonymous due to security concerns.

According to various sources, Christianity remains the fastest-growing religion in Iran and the second-largest non-Muslim religion there.

The Iranian church’s growth can be attributed to factors such as better-trained leaders, more than a million bibles distributed to Iranians since 2003, the prevalence of underground house churches, and access to Christian TV through satellite technology (even though satellite dishes are banned by Iran).

The Iranian regime will sometimes levy criminal charges against Christians based on the factors that have aided the church’s growth, such as the use of “religious propaganda” and forming house churches that exceed the maximum allowance of 12 people. But usually, a typical conviction in Iran will imprison Christians for crimes against national security, espionage, or trying to overthrow the government. It is widely known that these charges are euphemisms for committing the apostasy of leaving Islam to become a Christian.

“Iran has been escalating its internal persecution of Christians in recent months. The growing numbers of Iranians rejecting Islam and turning to Christianity is considered a serious political threat by the state. This is a symptom of the widespread disillusionment and sense of hopelessness felt by many Iranians after 37 years of the Iranian Revolution,” Rev. Mark Durie, a human rights activist and research fellow with the Middle East Forum think tank, told JNS.org.

The “political threat” cited by Durie is motivated by the Iranian regime’s apocalyptic belief that it must kill all infidels, a belief exemplified by Iranian leaders’ promotion of slogans such as “Death to Israel” and “Death to America.” For Iran, this will usher in the appearance of their Mahdi (Messiah) on Earth, and the Mahdi will establish a global Islamic caliphate.

Joel C. Rosenberg, an evangelical Christian political strategist and best-selling author, has been particularly vocal about Iran’s mindset on the persecution of Christians and other non-Muslims.

“ISIS (Islamic State) wants to commit genocide now to build a caliphate now. Iran is a longer-term player–they invented chess. [Iran says,] ‘No, we don’t build a caliphate now, you build a pathway to nuclear weapons now, then when you have an arsenal, then you can start a war to build a caliphate to kill millions, and not just thousands’….That’s their plan. It’s a different strategy, [but] the same objective,” Rosenberg recently told a packed evangelical church in Austin, Texas.

Rosenberg added that generally, the predominantly-Muslim Iranian people do not support much of the Iranian government’s policy.

“The people of Iran are being held hostage by a regime that’s evil….Most Iranians are against their government, but there’s nothing they can do, it’s a tyranny….[The regime has] hanged and executed almost 1,000 people just in the past year,” he said.

“The plummeting price of oil has made the financial situation of the Iranian government even more difficult. [January’s] prisoner exchange has taken place in the context of pressure on Iran to address its economic problems and to regain more than $50 billion of frozen assets. The nuclear deal and the prisoner exchange both seek to address the same fundamental issue of gaining access to finance and global trade,” Rev. Durie told JNS.org.

The Revolutionary Guard Corps controls most of the Iranian economy, which means that frozen assets and investments are in danger of being soaked up by an inefficient state sector, rendering President Rouhani incapable of fixing the economy.

In addition to the expectation that the nuclear deal will help boost Iran’s economy, some see the agreement as a watershed moment that opens the door for global leaders and advocacy groups to increase pressure on Rouhani to not only release a handful of prisoners, but fundamentally change Iran’s abusive policies toward Christians and other minority groups.

“I urge [Iran] to spare no effort in addressing long-standing human rights concerns repeatedly raised by the U.N. human rights mechanisms, especially the alarming surge in executions this past year, increasing restrictions on freedom of expression and peaceful assemblies, women’s rights, discrimination against religious and ethnic minorities, and the ongoing prosecution of journalists, lawyers, and human rights defenders,” the U.N. special rapporteur on the situation of human rights in Iran, Ahmed Shaheed, said in a statement.