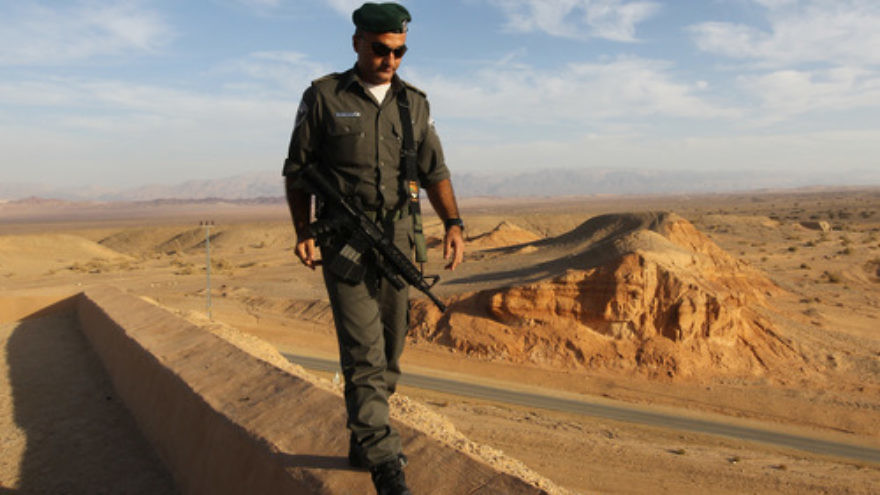 Emerging from the chaos of the Syrian civil war, the Islamic State in Iraq and Greater Syria (ISIS) terrorist group has gained the world’s attention for its brutal medieval-style Islamic justice and its swift victories in Iraq, threatening to overrun the weak U.S.-backed government there. But now ISIS is also setting its sights on Jordan, threatening to drag Israel into the global jihadist conflict.

“They are a vicious and brutal group, and have even done some things that al-Qaeda thought were unwise,” Elliot Abrams, who served as deputy national security advisor for former President George W. Bush and is currently a senior fellow at the Council on Foreign Relations, told JNS.org.

ISIS has origins in the various different al-Qaeda-affiliated Sunni jihadists groups that have been active in the region for most of the past decade, including the infamous al-Qaeda in Iraq, led by former Jordanian-born terrorist Abu Musab al-Zarqawi, who was killed in a U.S. airstrike in 2006 during the Iraq War.

As the Syrian civil war has dragged on since 2011, ISIS and other al-Qaeda-influenced jihadist have been able to bolster themselves through ransom, extortion, and oil revenue, while simultaneously attracting fighters from across the world.

Amid its swift victories in large swaths of Iraq, ISIS has also set its sights on nearby Jordan, which is ruled by the moderate pro-Western King Abdullah. ISIS terrorists consider Abdullah an enemy of Islam and an infidel, and have publicly called for his execution. A recent video posted by ISIS threatened to “slaughter” the king and called him a “tyrant.”

Yet ISIS’s rapid progress through Iraq can be deceiving. While the terror group has been noted for its success in conquering Mosul, Iraq’s second-largest city, and for threatening Baghdad, it has also faced a weak enemy so far.

“It’s true they have done better than anybody expected in Iraq. But it’s not that they have done things brilliantly, it’s just that the Iraqi army has totally collapsed,” Abrams said, noting that the Jordanian and Israeli militaries, by contrast, are “hard targets and they certainly know how to fight.”

Recent reports indicate that Jordan and Israel are taking the jihadist threat seriously and have stepped up cooperation on the issue. Unlike most Arab states, Jordan has a peace treaty with Israel, and as U.S. allies, the nations’ governments and militaries maintain relatively close ties.

“There is a very good cooperation between us regarding ISIS’s growing presence in Iraq and Syria, but also on issues relating to other radical forces in the Middle East which have their sights set on Israel and Jordan,” a Jordanian diplomatic source told Yedioth Ahronoth.

ISIS, meanwhile, is seeking to establish a new Islamic Caliphate and modern-day borders that were largely established by European powers more than a century ago are irrelevant to the jihadist group.

“We don’t recognize borders,” an ISIS fighter from the United Kingdom said in a recently released propaganda video, adding that he has fought in Syria and will go “wherever our leader sends us,” including Lebanon, Jordan, and beyond.

Reports indicate that ISIS terrorists, with the support of Sunni tribal rebels in Iraq, have taken over the only official border crossing with Jordan, at Tirbil, as well as a number of Iraqi towns near the border. In response, Jordan announced that it has significantly beefed up its military presence along the 112-mile-long border, which is largely barren desert.

David Schenker, director of the program on Arab politics at the Washington Institute for Near East Policy, told JNS.org that he doesn’t think ISIS would be a match for Jordan’s militarily.

“Jordan has an advanced modern military with fighter jets, tanks, [and] well-trained and motivated troops,” he said. “I don’t think Jordan’s military would have a problem fighting ISIS on the border.”

At the same time, ISIS may also risk stretching its limits as a terrorist organization too far.

“If they continue to stretch themselves to a bigger area, then they will need to set up logistics, supply lines, training camps,” said Maj. Gen. Ziv, who played a role in founding the IDF’s Academy of Tactical Command. “They will need to act like an ordinary army.”

“This would expose them more and make them vulnerable to being re-attacked,” he added. “They will lose the hidden or surprise element of a terrorist organization.”

Despite ISIS’s potential weaknesses going up against the Western-backed Jordanian or Israeli militaries, jihadist groups do pose a significant long-term regional threat as the Middle East continues to destabilize from the Syrian civil war.

“The more inroads ISIS makes in Iraq, Syria, and in the region, there will be more who sympathize with their cause,” said Schenker.

At the same time, Jordan is facing an increasing internal threat from terrorists returning to the country. It is estimated that nearly 2,000 Jordanians are fighting in the Syrian conflict.

“We shouldn’t be naïve, they are not returning to Jordan to retire,” Ziv said. “Their goal is to reproduce al-Qaeda in Jordan.”

For Jordan, the problem is even more acute due to the large border it shares with Syria and Iraq as well as the huge Syrian refugee population the country is hosting. According to the United Nations, there are nearly 650,000 registered Syrian refugees in Jordan, with other estimates approaching close to a million. This costs the Jordanian economy billions a year.

In response to this threat, Jordan’s parliament recently passed an amendment to its 2006 anti-terror bill that will give security forces the power to detain and try citizens suspected of belonging to terror groups.

“The Jordan has excellent intelligence services, but it’s not going to be 100 percent,” Schenker said.

But the threat of battle-hardened jihadists returning home is not only a problem for Jordan. Many Middle Eastern countries, including Israel, have to contend with citizens who have joined jihadists groups in Syria. At the same time, it is estimated that there are up to 3,000 Westerners, including U.S. citizens, who are fighting in Syria and Iraq for these jihadist groups. There is a “virtual United Nations” fighting in Syria, said Abrams.

“The fundamental problem is how do you [as a government] prevent recruiting?” he said.

Jordan has also allied itself closely with the U.S. on counter-terrorism training. The Central Intelligence Agency, for instance, trains Syriam rebels in Jordan. President Barack Obama also announced June 25 that he would provide $500 million for advanced military training and support for Syria’s moderate opposition.

But Abrams believes the U.S. needs to do more to support its allies in the region and get Syria under control.

“We made a huge mistake in being so slow in helping the Syrian rebels,” he said. “And now with the Sunni groups in Iraq, we should be going back to them to offer them help. We should be talking to our allies in Turkey, Israel, Jordan, and Saudi Arabia.”

Israeli Deputy Defense Minister Danny Danon, however, stressed that the U.S. should proceed with caution regarding its involvement in internal Middle East affairs. Israel, he said, treads a neutral path on the conflicts in Syria and Iraq.

“Our region is complex. … We (Israel) don’t take sides on this issue,” Danon told JNS.org. “The only thing we do is, we tell our friends in the U.S., ‘Be careful with the alliances you are making today, because they can be used against you.’”