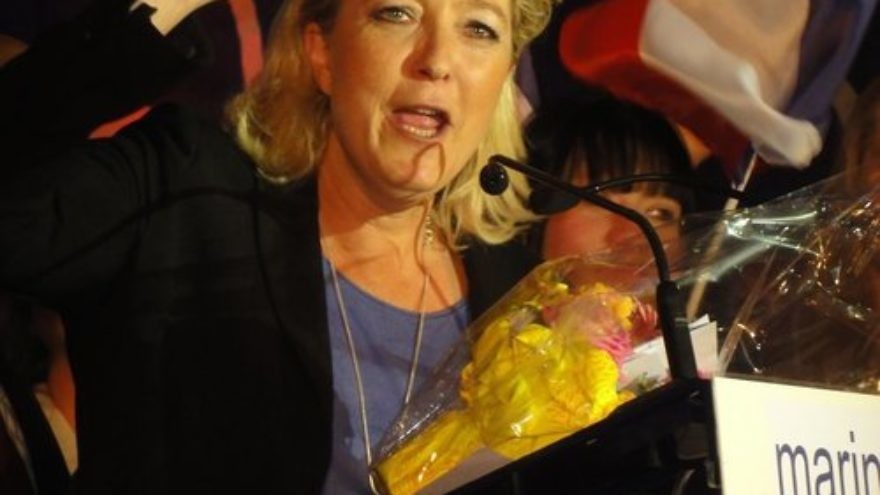 (April 24, 2017 / JNS) Jewish leaders inside and outside France expressed alarm after far-right populist Marine Le Pen’s strong showing in the first round of the French presidential election Sunday.

Pro-Europe centrist Emmanuel Macron of the En Marche party and Le Pen, head of the National Front party, emerged victorious in the election’s initial phase. Macron gained 23.7 percent of the vote to Le Pen’s 21.7 percent, according to Harris poll estimates. The candidates will face off in the final round May 7.

According to a poll from Ipsos/Sopra Steria released Sunday, Macron is projected to win the final round with 62 percent of the vote.

Many French Jews consider Le Pen a threat to their community, and the CRIF umbrella group for French-Jewish organizations has referred to the far-right politician as a candidate “of hatred.”

Russian Chief Rabbi Berel Lazar also weighed in, saying in an address organized by the Limmud FSU educational organization, “If Marine Le Pen is elected president of France, the Jews must leave.”

Le Pen has previously called on French Jews to give up wearing yarmulkes as part of her initiative to ban religious symbols in public and fight radical Islam in France.

“The struggle against radical Islam should be a joint struggle and everyone should say, ‘There, we are sacrificing something,’” she told Israel’s Channel 2. “Maybe [Jews] will do with just wearing a hat, but it would be a step in the effort to stamp out radical Islam in France.”

She has also stated that if elected, she would bar dual citizenship with non-European Union countries, distressing many French Jews who also hold Israeli citizenship and would be forced to renounce it.

“Israel is not a European country and doesn’t consider itself as such,” Le Pen told France24 in February.

At the same time, some Jews support Le Pen specifically because of her commitment to fighting radical Islam, and are willing to look the other way on her nationalistic agenda’s implications for matters such as Jewish ritual.

“In 2002 and 2007, surveys show that less than 5 percent of Jews voted for the FN (National Front), for Jean-Marie Le Pen. In 2012, Marine Le Pen drew about 14 percent of this electorate,” Jérôme Fourquet—an analyst at FIFG, an organization studying French public opinion—told i24news this month. “There has been a rise in insecurity since the early 2000s in the Jewish community, that is, a rise in delinquency aimed specifically at Jews, and also a feeling, that is quite justified, that the Republic and French society looked away and did not want to see.”

Approximately 70,000 Israelis are eligible to vote in France’s election. French Israelis turned out in droves to cast absentee ballots Sunday, presumably against the far-right candidate.

“The four candidates are offering very different programs, so it’s hard because it’s different from other elections. I can’t say whom I’ll vote for, but I will certainly vote,” French Ambassador to Israel Hélène Le Gal said Sunday, Yedioth Ahronoth reported.

Le Pen’s political party, the National Front, was founded by her father Jean-Marie Le Pen, a convicted Holocaust denier who has been charged multiple times for inciting racism and anti-Semitic hatred.

In mid-April, Israel’s Foreign Ministry condemned Marine Le Pen for her comments on the Holocaust that “contradicted historical truth,” when she stated France bears no responsibility for implementing a German-ordered roundup of 13,000 Jews for deportation to Auschwitz in 1942. Former French President Jacques Chirac and current President Francois Hollande have both apologized for France’s role in the roundup, which is known as the “Vel d’Hiv.”

Prior to the first round of the French election Sunday, Le Pen’s challenger Macron said her comments on the Holocaust were “a serious mistake.”

Macron, a 39-year-old former banker, has built up a centrist political movement calledEn Marche and has stated he is “neither of the right, nor the left.” He incensed French Jews when he stated in 2016 that France’s Jewish schools must de-emphasize Talmudic studies in their curriculum.

“Religion cannot be present in school. But I hear few people becoming concerned by the consequences of this phenomenon, more and more children being sent to religious schools which teach them to hate the Republic and teach mainly in Arabic, or in other places (Jewish schools) teach the Torah more than general studies,” Macron said.

Despite these comments, Macron is viewed as the preferable candidate by French Jews who are repelled by Le Pen’s Holocaust revisionism and direct affiliation with known anti-Semites such as her father. Yet the National Front, led by Marine Le Pen, did expel Jean-Marie Le Pen from the party in 2015.

“My line is clear: We are friends of the state of Israel and partners for Israel’s security. We will always be in this camp…At the same time…I would like to advance with the recognition of two states,’’ he said.