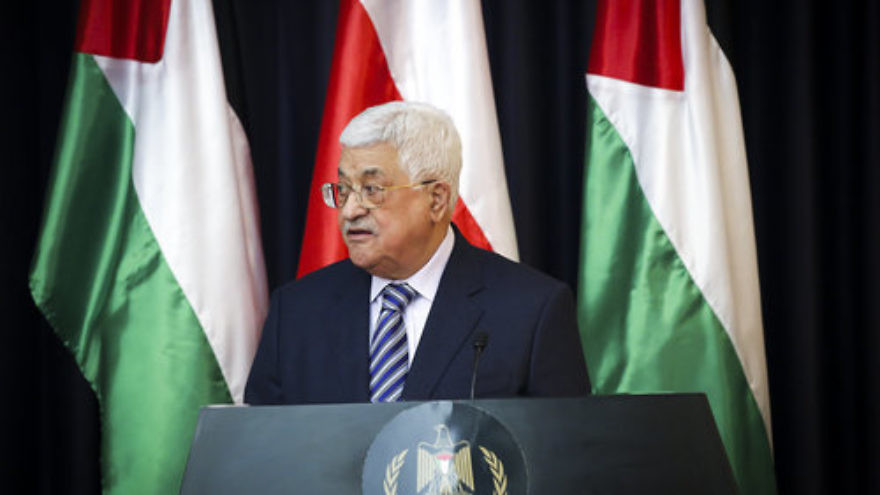 (May 3, 2017 / JNS) Despite a reportedly planned increase in American aid to the Palestinians, Wednesday’s meeting between President Donald Trump and Palestinian Authority (PA) President Mahmoud Abbas came as the U.S.-Israel relationship and the Middle East’s regional dynamics increasingly played out in Israel’s favor.

A question hovering over the Trump-Abbas meeting is whether or not Trump, whose administration has expressed a desire to broker a “conflict-ending settlement between the Palestinians and Israel,” has a backup plan in the event of failed negotiations between the parties.

The Palestinians themselves seem to assume renewed U.S.-led peace talks will fail, as evidenced by a PA official’s remark that Abbas has rejected Israel’s demand to stop payments to jailed terrorist prisoners. Issa Qaraqe, chairman of the PA Prisoners’ Affairs Committee, told Al-Monitor in a report published May 1 that Abbas “has stressed in several speeches and meetings that supporting the families of prisoners and martyrs is a national, humanitarian and social duty that shall always be fulfilled regardless of Israeli and international pressures.”

Some observers expect that the failure of any future peace talks could pave the way for a staunchly pro-Israel policy from the Trump administration, which is already taking Israel-sympathetic positions such as opposing the Iran nuclear deal and considering moving the U.S. embassy from Tel Aviv to Jerusalem, while unabashedly defending Israel at the United Nations under the leadership of Ambassador Nikki Haley.

At the same time, this year’s transition from President Barack Obama to Trump has been marked by a major shift in America’s approach to the Middle East. While the previous administration sought rapprochement with the Iranian-Shi’a axis, including through the nuclear deal, Trump’s White House has shifted U.S. policy back toward supporting the interests of America’s traditional Sunni regional allies such as the anti-Iran Gulf states and Egypt.

Trump has forged what appears to be a cordial relationship with Egyptian President Abdel Fattah El-Sisi, who is waging a battle against domestic Islamist terrorists. Sisi last month made his first official visit to the U.S. since rising to power in 2013. After Sisi overthrew former President Mohammed Morsi—a leader of Hamas’s parent group, the Muslim Brotherhood—the Obama administration had declined to invite Sisi to the White House, criticized his human rights record and withheld the transfer of weapons to his military.

Yet State Department documents published last month by Foreign Policy magazine reveal that the U.S. will cut aid to Egypt by 47.4 percent and to Jordan by 21 percent for the fiscal year of 2018, as part of the Trump administration’s planned foreign aid cuts around the world. The same documents show a planned 4.6-percent increase in American aid—amounting to $215 million for the year—to Palestinian-controlled areas in the West Bank and Gaza.

Do the reported plans for decreasing aid to Egypt and Jordan—Israel’s two peaceful Arab neighbors—and increasing aid to the Palestinians contradict Trump’s other moves in the region? That is not the case, according to Jonathan Schanzer, vice president for research at the Foundation for Defense of Democracies think tank.

Schanzer explained that the Trump administration “has signaled for some time that it would begin to decrease aid” to Egypt.

“I don’t think it has much to do with the upcoming Abbas visit,” he told JNS.org before Wednesday’s meeting between Trump and Abbas. “It is part of the foreign policy vision as laid out by the president, where aid to other countries is reduced, allowing him to focus on funds for America and Americans.”

Asked for his take on Trump’s approach to the Israeli-Palestinian conflict, Schanzer said, “The president’s vision is still not fully clear. He has signaled his intent to pursue a two-state solution and has sent [international negotiations representative] Jason Greenblatt to the region to begin to explore this.”

“We continue to hear rumors of a possible [peace] summit in the coming months,” Schanzer added. “But the exact terms of a possible agreement have not been released.”

Yoram Meital, chairman of the Chaim Herzog Center for Middle East Studies and Diplomacy at Israel’s Ben-Gurion University of the Negev, told JNS.org that Trump’s reported plan to increase aid for the Palestinians “seems like an effort to re-establish the U.S. reputation as an honest broker.” But he added that the aid increase “contradicts other significant decisions, first among them the commitment to transfer the U.S. embassy to Jerusalem.”

Regarding Trump’s Egypt policy, Meital said the administration “has demonstrated an interest in keeping the Egyptian army as a key partner in the fight against Islamist terrorism and not to push the Egyptian leadership into the arms of Russia.” The Russians had strengthened their ties with Sisi-led Egypt while the Obama administration bluntly criticized Sisi, Meital noted.

In Meital’s estimation, Trump’s policy toward Israel and the Palestinians remains unclear, and the president’s public statements have “so far reflected a simplistic view of the core issues.”