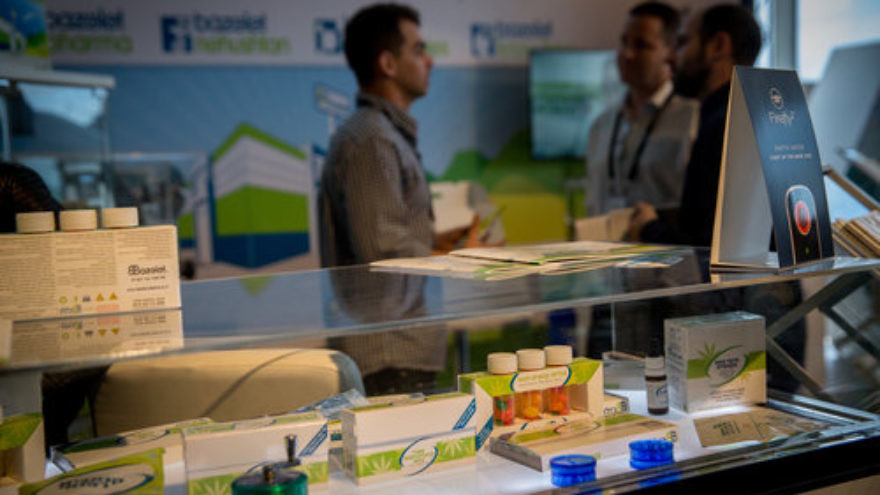 TEL AVIV—Beyond the scent of potent cannabis drifting about the venue, there was an extra buzz in the air this year at Israel’s third annual CannaTech medical marijuana innovation conference.

The current excitement for cannabis industry leaders stems from recent changes to the Jewish state’s official policy on the plant. In February, an Israeli government committee took the first steps toward allowing the export of medical marijuana from Israel, and in March, the Israeli Knesset passed a new law essentially decriminalizing recreational marijuana use nationwide.

Given these developments, it was high time for this week’s CannaTech conference, held at a swanky venue overlooking the Mediterranean Sea at the Tel Aviv port. But amid the attention-grabbing legislation on recreational marijuana, CannaTech continued its traditional focus on showcasing the ingenuity of Israel’s medical marijuana practitioners. The gathering welcomed medical cannabis professionals and enthusiasts from around the world to network and enjoy a series of TED-style lectures from industry leaders.

The attendees came from diverse professional backgrounds, yet they were bound by a common enthusiasm for applying their expertise to medical cannabis innovation.

On the heels of the domestic legislative victories for cannabis advocates, this year’s conference was “double the size” of the previous year’s summit, said Saul Kaye, head of the CannaTech conference and CEO of the iCAN: Israel-Cannabis organization, which runs the conferences and has the stated mission “to identify, invest, accelerate and showcase cannabis innovation for the global cannabis economy.”

In recent years, Israel has become a hub for the study and distribution of medical cannabis. Hebrew University professor Raphael Mechoulam initially discovered THC, the primary psychoactive compound in the cannabis plant, in the 1970s. Since then, Israeli hospitals have demonstrated a willingness to perform clinical trials on the effectiveness of cannabis in relieving the symptoms of tens of thousands of patients suffering from chronic or terminal conditions.

As other markets lag behind in clinical studies, Israel has become an innovator. In contrast to cannabis industry conferences in other countries, which generally focus on “more lighting solutions, more trimming solutions and more growing solutions,” CannaTech 2017 showcased “technology drivers and regulators in the medical cannabis industry,” Kaye told JNS.org.

Asked about plans for the future, Kaye said iCAN would be releasing “the first cannabis advanced pharmaceutical formulation for sleep,” dubbed “ican.sleep,” in a joint venture with the U.S.-based company CannRx Technology.

“We’ve partnered to take CannaTech global because this voice needs to be heard elsewhere,” Kaye added. “We’re going to London and we’re going to Sydney, and each of those locations are unique based upon the content that each ecosystem requires. Because what we’ve done successfully is essentially build an ecosystem.”

Members of that ecosystem range from medical cannabis patients to agricultural specialists to delivery device developers, many of whom were represented at the conference.

One presenter was Kanabo, a Tel-Aviv based company that specializes in cannabis vaporization technology, in particular the development of vaping formulations for specific illnesses.

“What we’re trying to do is take the most successful recreational cannabis delivery system today, vape pens, and combine it with the purest and most demanded connoisseur cannabis extracts, and make it all medical. It’s a challenge,” Kanabo’s CEO and founder, Avihu Tamir, told JNS.org.

Tamir said he sees vaporization as the future of medical cannabis consumption, calling it the “fastest-growing method for cannabis consumption in the recreational market.” Yet the industry, he said, still needs “a medical device, something we can give patients. If I’m giving them something which contains 100 percent cannabinoids and in some cases 90 percent THC, you have to be very precise.”

When asked if Kanabo would market its products outside of the Jewish state, its CEO responded, “The Israeli market is our best market, but our future market is outside of Israel.”

Other companies attending the conference already had a dual presence in Israel and abroad, such as Ilan Bio, an agro-biotechnology company with operations in Israel and California. Liam Gal-On, CEO of Ilan Bio, explained that his venture specializes in “cloning the DNA and genetics” of the cannabis plant.

“We do exactly the same in both Israel and California. We are working with clinical trials to identify which strains to clone, to target and treat specific diseases and determine dosage,” Gal-On told JNS.org.

Moshe Ihea, founder and CEO of Israel-based Cannabliss, had some of his company’s cannabis-infused products on display at the conference. “We have oils, we have cookies, we have capsules, we have creams, we have suppositories,” he said at his CannaTech booth.

Asked why patients would opt for cannabis suppositories, Ihea said, “It’s not allowed in Israel yet, but it’s going to be allowed and it works really well for treating pain, Crohn’s disease and colitis. We’re currently conducting clinical trials.”

As Israel explores the new frontier of legalized recreational marijuana, it’s clear from the CannaTech conference that at home and abroad, the Jewish state is likely to maintain its status as a blooming medical cannabis powerhouse.