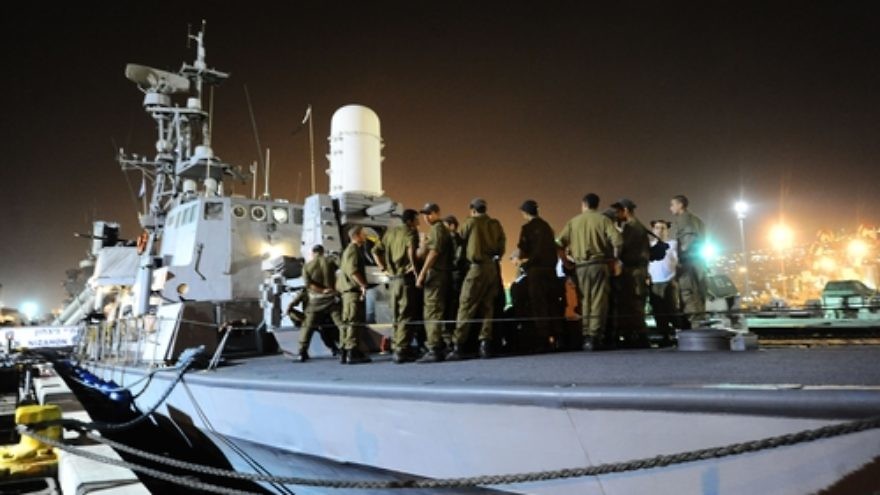 (June 28, 2016 / JNS) After months of speculation that a reconciliation deal was imminent, Israel and Turkey have agreed to normalize diplomatic ties following a six-year rift in their relationship.

“Israel has reached an agreement of strategic importance for the State of Israel, for security, for regional stability, and for the Israeli economy,” Israeli Prime Minister Benjamin Netanyahu said at a press conference in Rome on Monday.

Turkey-Israel ties broke down following the 2010 Gaza flotilla incident, in which nine Turkish militants were killed in clashes after they had attacked Israeli commandos who boarded a ship that was trying to breach the blockade on Gaza. After a 2011 United Nations report largely exonerated Israel for the flotilla raid, Turkey expelled Israel’s ambassador to the country and froze military cooperation with the Jewish state. Subsequent years saw frequent anti-Israel and anti-Semitic rhetoric from Turkish President (and formerly prime minister) Recep Tayyip Erdogan.

In a 2013 phone call brokered by U.S. President Barack Obama, Netanyahu apologized to Erdogan for the flotilla incident. Even after the apology, the Turkish-Israeli feud flared up in 2014 during Israel’s war with Hamas in Gaza, when Turkish leaders accused Netanyahu of committing “crimes against humanity” in the Israeli-Palestinian conflict. But recent months provided signs of warming relations. In March 2016, Turkish leaders offered Israel condolences for the three Israeli tourists killed in a suicide bombing in Istanbul. Additionally, Erdogan’s Islamist AKP political party expelled a low-level official, Irem Aktas, for tweeting that she “wished that the wounded Israeli tourists were dead.”

The new normalization deal reportedly includes $20 million in Israeli compensation for the families of those killed in the flotilla incident, an end to all Turkish legal claims against the Israeli military over the interception, and the mutual restoration of ambassadors. Turkey will be allowed to deliver humanitarian aid to the Gaza Strip and to invest in infrastructure there, including the construction of residential buildings and a hospital.

Netanyahu also said that Turkey, which is home to the Istanbul-based external headquarters of the Gaza-ruling Palestinian terror group Hamas, has committed “to prevent all terrorist or military activity against Israel from Turkish soil, including collecting funds for these purposes.”

The view from Turkey

The normalization deal, reached June 27, “is presented by the Turkish government as a major victory in foreign policy,” said Dr. Aykan Erdemir, a senior fellow at the Foundation for Defense of Democracies (FDD) think tank who formerly served as a member of the Turkish Parliament.

“Clearly, Turkey is a taking a step back from its earlier ideological and adventurous foreign policy rooted in Islamist principles rather than traditional republican values,” Erdemir told JNS.org, explaining that the deal with Israel is also a significant shift specifically for Erdogan, who has “made a career out of polarization through sensational and anti-Semitic rhetoric.”

Turkey’s isolation abroad, deteriorating domestic and regional security situation, and declining economy all played a role in Erdogan’s rapprochement with Israel. A similar trend can be seen with regard to Turkish relations with Russia, which soured after Turkey shot down a Russian jet that violated its airspace near the Syria-Turkey border in November 2015. This week, Erdogan sent a letter to Russia in which he apologized for the downing of the jet, according to the Kremlin.

“Turkey is trying to break out of its isolation, which until recently Erdogan cherished as ‘precious isolation,’” Erdemir said. “It is clear that Turkey is no longer enjoying this kind of isolation and it is trying to enter into transactional partnerships.”

Erdogan’s effort to increase his power within Turkey, including his shift from prime minister to president, may have also played a role in forging the deal. “That Erdogan has a clear majority in parliament, and that he doesn’t need to hold general elections for the next three and half years, all allowed Erdogan this room to maneuver,” Erdemir said, adding that Erodgan’s near-complete control of Turkish media may help him sell the deal with Israel to the Turkish people.

The view from Israel

Dr. Nimrod Goren, founder and head of Mitvim – The Israeli Institute for Regional Foreign Policies as well as a teaching fellow in Middle Eastern Studies at Hebrew University of Jerusalem, told JNS.org that the reconciliation agreement “enables Israel and Turkey to cooperate and coordinate regarding security threats in the changing Middle East, and to promote the export to Turkey of Israeli natural gas.”

Goren said that Turkey’s new ability to launch infrastructure projects in Gaza will improve living conditions for that territory’s Palestinian residents, and might also increase stability between Israel and Gaza. He also believes that Turkey will be able to serve as a mediator between Israel and Hamas at times of need.

“Moreover, reconciliation with Turkey means that Israel can once again enjoy normal relations with a major Muslim-populated country, normal relations that also include tourism and civil society cooperation,” said Goren.

A majority of the Israeli public has been expressing critical views about the terms of the deal, particularly with the regard to Hamas and the issue of terrorism. According to a Midgam poll conducted for Israel’s Channel 10 on Monday, 56 percent of all Israelis oppose the deal; 65 percent of Israeli Jews oppose the deal and 24 percent support it.

The bereaved families of Israeli soldiers Oron Shaul and Hadar Goldin—both of whom were killed during the 2014 Gaza war and whose bodies are still held by Hamas—as well as other families of Israelis who were killed or are believed to be in Hamas captivity have been protesting the Turkey deal because it does not address the return of the dead or missing Israelis.

In the Israeli Knesset, Zionist Union party leader Isaac Herzog said that Turkey “is not an ally of Israel anymore but an ally of Hamas,” and that rewarding “attackers of the IDF is a dangerous precedent,” the Jerusalem Post reported.

Michael Koplow, an expert on Turkey and the policy director for the Israel Policy Forum think tank, told JNS.org he is skeptical that the normalization deal will survive a future escalation in the Israeli-Palestinian conflict resembling the 2014 Gaza war. He said that when such a conflict occurs, Turkey is likely to again withdraw its ambassador from Israel as soon as there are Palestinian casualties. Further, said Koplow, Turkey will be even more hard-pressed to maintain relations with Israel if any of its industrial projects in Gaza are targeted by the Israeli military.

“Israel is counting on Turkey to wield its influence with Hamas to prevent attacks emanating or being financed from Turkey, but it is unclear that Turkey will be able to deliver, or even verify, that promise,” he said.

While the deal could offer mutual benefits for Turkey and Israel in other areas, Koplow still downplayed the agreement’s upside.

“The potential for energy cooperation is much lower than has been assumed given the enormous technical hurdles that would have be overcome to build a pipeline through the Mediterranean to Turkey, and the fact that Turkey would have to reconcile with Cyprus for the pipeline to be laid, not to mention that Leviathan—the [Israeli offshore] field designated for gas exports—is not even yet in development,” he said.

Ultimately, added Koplow, Erdogan has “demonstrated a distinct inability to maintain a temperate vocabulary or tone when it comes to Israel, and I don’t expect that to suddenly change. While there is gain to be had both by Israel and Turkey, much has happened since 2010 and there are lots of ways that this deal can fall apart, so I think there is a long way to go before the two countries are able to fully restore their relationship to its previous state.”

“It has become almost impossible to have a reasoned debate on Turkish-Israeli bilateral relations without making recourse to hateful and bigoted language,” he said. “I think the challenge ahead is for Turkey to grow out of this mentality.”

Erdemir said it remains to be seen whether Turkey “keeps up its promise” to limit the activity of Hamas’s military wing on Turkish soil.

“My question is how will Turkey’s commitments be monitored and if Israel can enforce this,” he said.

Mitvim’s Goren believes that going forward, NGOs and think tanks should have a greater role in working to improve Turkey-Israel relations, citing his own institute’s ongoing collaboration with the Turkish Global Political Trends Center in that area.

“Just this past weekend, on the verge of the official agreement, the two institutes convened their seventh round of talks in Istanbul, in cooperation with the Friedrich-Ebert-Stiftung [political foundation], joined by the first time by a Member of Knesset (MK Ksenia Svetlova) and a Turkish Foreign Ministry official (Dr. Mesut Ozcan),” Goren said. “This channel can serve as a model to other organizations wishing to play a role in the rebuilding of Israel-Turkey relations.”