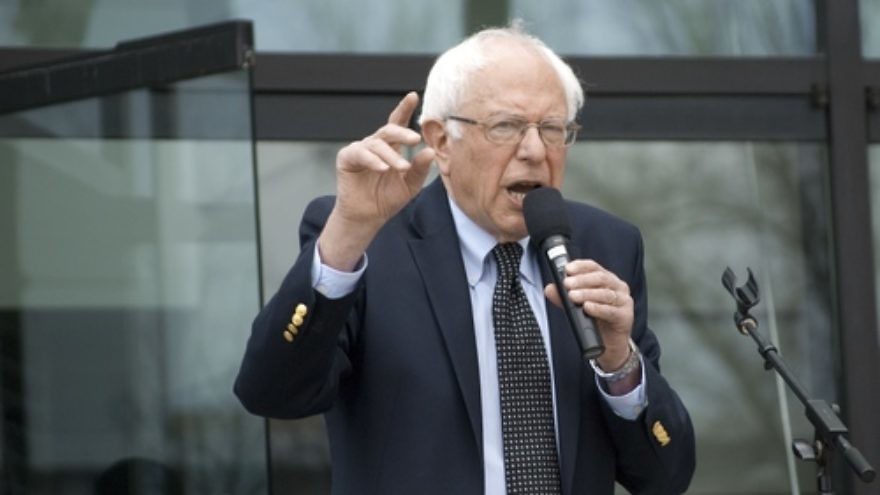 (May 13, 2016 / JNS) Leading up to Election Day in November, American voters will likely continue to hear from presumptive nominees Donald Trump and Hillary Clinton about why either candidate would be the best president for Israel’s interests. But how are voters trending on Israel to begin with?

Earlier this month, a Pew Research Center survey examining attitudes about foreign policy among the U.S. electorate found that American sympathies continue to strongly favor Israel (54 percent) over the Palestinians (19 percent). Yet the survey also revealed a number of trends that suggest a possible erosion of the long-held bipartisan consensus on supporting the Jewish state.

At the same time, the partisan divide on Israel has become more apparent through Pew’s data. While Democratic sympathy toward Israel has remained steady over the last few decades—44 percent in 1978 compared to 43 percent today—this contrasts with the sharp rise in Republican sympathy for Israel, 49 to 75 percent, and even the modest gain among independents, 45 percent to 52 percent. Perhaps more troubling for supporters of Israel is that only 33 percent of liberal Democrats sympathize with Israel, while 40 percent sympathize with the Palestinians.

“The results display the rapidly deteriorating position of the Israeli government in the eyes of liberal Democrats, the group who will broadly influence the next likely [U.S.] administration, assuming [Hillary] Clinton wins the election,” Dr. Steven M. Cohen, a research professor of Jewish social policy at Hebrew Union College-Jewish Institute of Religion (HUC-JIR), told JNS.

The survey revealed a further divide within the Democratic electorate itself. Clinton supporters were more likely to sympathize with Israel than the Palestinians, 47 percent versus 27 percent, while supporters of her Democratic primary opponent Vermont Sen. Bernie Sanders backed Israel at a rate of only 33 percent, compared with 39-percent sympathy with the Palestinians.

“Evidence has been accumulating for some time of a division among Democratic voters over Israel. The left wing of the party is more critical of U.S. support for Israel,” Dr. Theodore Sasson, senior research scientist at the Cohen Center for Modern Jewish Studies and the Steinhardt Social Research Institute at Brandeis University, told JNS.

Dr. Jonathan Rynhold, director of the Argov Center for the Study of Israel and the Jewish People at Bar-Ilan University, said that generally, the American public’s sympathy toward Israel has been growing since 2000. Yet Americans have become more divided over policy on the Israeli-Palestinian conflict and those divisions “increasingly line up with the main ideological and political divides in America,” said Rynhold, author of the 2015 book “The Arab-Israeli Conflict in American Political Culture.”

“Since younger Americans are more liberal, and each generation is more liberal than the previous generation, they are less sympathetic toward Israel and more inclined to believe that the U.S. should adopt an even-handed approach towards the conflict,” Rynhold told JNS. “They are also more critical of Israel’s use of military force against Hamas and Hezbollah.”

These trends, said HUC-JIR’s Cohen, “parallel trends in Europe among people with a similar liberal view of the world.” This sentiment became evident during the summer 2014 Gaza war between Hamas and Israel, when anti-Israel protests erupted throughout Europe. Additionally, a number of European legislatures have symbolically recognized Palestinian statehood in recent years, while Sweden has become the only country to do so on the government level.

“I doubt the level of hostility [in America] will reach the levels we see in Europe,” said Brandeis’s Sasson, who noted that even Sanders, the “current leader of the left, proclaims himself to be pro-Israel.”

Rynhold echoed that sentiment, saying that the gap on Israel between the American left and the European left remains wide.

Cohen believes that much of liberals’ disillusionment with Israel can traced to their opinions about the Israeli government’s policies on the Palestinians.

“One of Israel’s public relations strengths in the past was that it appeared genuinely interested in reaching a peace agreement with the Palestinians, if only Israel’s security needs could be addressed,” Cohen said. “The change in perception of Israel’s intent has fueled its abandonment by liberal-minded Europeans, Americans, and Diaspora Jews of similar political identities. A Labor-led government [in Israel] would change those perceptions and repair Israel’s image among the liberals in several societies.”

The growing partisan divide on Israel manifested itself last year when Israeli Prime Minister Benjamin Netanyahu addressed the U.S. Congress about the then-emerging Iran nuclear deal. Netanyahu’s speech was boycotted by a number of liberal Democrats (including Sanders), who accused the Israeli leader of undermining President Barack Obama by accepting an invitation to speak from the House of Representatives speaker before the White House was aware of it.

While Netanyahu gave his speech before Iran reached the deal with world powers, U.S.-Israel tensions only grew amid a legislative struggle that ended in Republicans’ failure to muster enough votes to defeat the agreement. As the Obama presidency winds down, the United States and Israel continue to forge strong ties, especially on the security front, with robust American funding for Israeli needs such as the Iron Dome missile-defense system. Yet fears persist about the growing liberal electorate’s views on Israel, especially among younger Americans.

“Over time, as the percentage of liberals among Democrats increases, the party’s support for Israel could well become more conditional on what they perceive as Israel’s willingness to support a two-state solution and perceptions related to other liberal causes inside Israel,” said Rynhold.

Rynhold believes that Israel can take a number of unilateral steps to gain more credibility among liberals, such as freezing settlement construction in order to demonstrate that it is “credible in its commitment to a two-state solution.” A settlement freeze, he said, “will not prevent liberal criticism of Israel’s security policy, but it will at least firm up liberal Americans’ understanding of the debate as a reasonable one between two sides committed to the same values.”

Taking the issue of settlements off the table, Rynhold said, would bolster the “growing sense among American liberals that the main threat or issue is Islamist radicalism in its various hues.”

“This will refocus their political attention away from Israeli policies and might also make them more understanding of Israel’s security dilemmas,” he said. “In this regard, it is interesting that between 2009 and 2015, support for the creation of a Palestinian state among Democrats fell (according to Gallup’s survey data). My sense is that ISIS’s arrival on the scene may have affected that.”