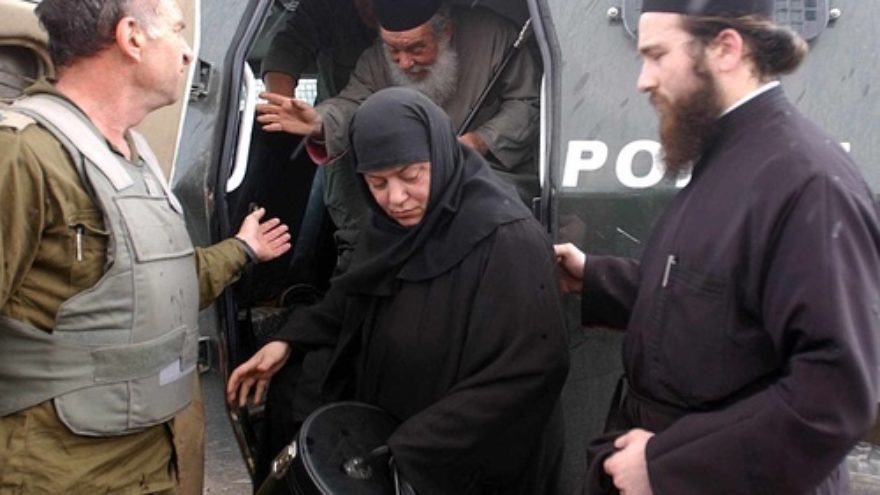 Click photo to download. Caption: An Israeli soldier helps to smuggle out a priest and a nun from the Church of the Nativity in Bethlehem on April 7, 2002. That year, a siege by Palestinian militants on the Church of the Nativity persisted from April 2 to May 10—just days after Easter on the Eastern Orthodox calendar. Credit: Flash90.
Republish this article
996 WORDS
Spread the word.
Help JNS grow!
Share now:

(April 17, 2014 / JNS) Millions of Christians celebrate this Easter Sunday on April 20 under threat throughout the Middle East. In recent years, Christians living in countries such as Syria, Egypt, and Iraq have suffered extreme persecution, with churches destroyed in violent acts of terror (sometimes during prayer services) and hundreds of thousands killed. Many other Christians have fled the region.

Yet in Israel, the one Mideast country where Christian residents have enjoyed security, freedom of worship, population growth, and support from the government, some Palestinian leaders are complaining about Israeli security policies relating to the Easter holiday.

Nabeel Shaath, a Central Committee Member of Palestinian Authority President Mahmoud Abbas’s ruling party, told the Palestinian news agency WAFA at a Christian prayer service in Jerusalem, “I have joined my Christian brothers and sisters at the beginning of a week that symbolizes hope after suffering. As a priest and dear friend once told me: ‘Every Easter we hope for the resurrection of our people as a free nation.’”

But according to David Parsons, media director of International Christian Embassy Jerusalem, Christians living in Israel and even in Palestinian controlled-territories, from which entry into Israel is not allowed without special permits, have much to be thankful for and little to complain about compared to their Christian brethren in neighboring countries.

“For Palestinian Christians, things may not be easy, but when you look around the region, I don’t know if those who are now complaining are going to get too much sympathy,” Parsons told JNS.org.

“Christian minority communities throughout the Middle East have been going through a very difficult time in recent years,” he said. “Amid the chaos of the Arab Spring, radical Islamists have won elections, and have felt more freedom to persecute Christians without consequences.”

In Egypt, during the brief rule of the Muslim brotherhood, Coptic Christian communities were massacred, with tens of thousands killed and many more fleeing the country. While that situation appears to be stabilizing under the rule of presidential hopeful General Abdel Fattah el-Sisi, Christians in Iraq and Syria have been victims of relentless attacks.

“Christians are being beheaded in Syria every day,” Parsons said.

Canon Andrew White, an Anglican priest who has a large parish in Baghdad, Iraq, has seen more than a thousand members of his church killed, including 163 in a single bombing.

According to White, the persecution of and intolerance shown to Christians, and the violence they suffer, comes almost exclusively at the hands of the same terrorists who are targeting Shiite Muslims in the country.

“It is predominantly external Iraqi Sunni terrorists such as Al-Qaeda,” White said.

White himself has escaped death on several occasions. “I’ve been mortared and rockets shot at me, grenades thrown at me. I’ve been kidnapped. I’ve been thrown into a room with chopped off fingers and toes all over the floor,” he said.

The president of the Foundation for Relief and Reconciliation in the Middle East, and the director of a multi-faith initiative known as the Jerusalem Peacemaking Project, White has firsthand knowledge of the divergent experiences of Christians in Israel and those in other Middle East countries.

“This is the only country, Israel I’m talking about, in the Middle East where Christians are truly free, and can live in peace. And the only country where the Christian community is growing, not diminishing,” White said.

Israel has had to take steps to protect Christian holy sites in recent years. White himself was involved in negotiations to end a siege by Palestinian militants on Bethlehem’s Church of the Nativity from April 2 to May 10, 2002—only days after Easter on the Eastern Orthodox calendar that year. Just getting to the negotiations proved challenging at the time.

“I suffer from MS (multiple sclerosis) and I had had a relapse in my illness. And I was in the hospital. I received a phone call from Yasser Arafat, who said, ‘Andrew, Andrew, they have taken our church. Come quickly. We need you to get it back for us,’” White recalled.

“Two minutes later, [I received] a call from Rabbi Michael Melchior, who was then Deputy Foreign Minister of Israel. He said, ‘Andrew, we need you. We’ve got a problem in Bethlehem. Come and help us, now.’ I said, ‘Rabbi Melchior, I’m a bit held up at the moment. I’m in hospital ill,’” said White.

According to White, Melchior then said, “‘Who do you work for, the Archbishop of Canterbury or God? Get here quickly.’ So I discharged myself from hospital. And I came.”

“They were there for 39 days,” White said. “They took over the church. They didn’t revere or respect this most holy site in Christendom. They were even sleeping in the birthplace of Jesus.”

White said Israel does its utmost to care for Christians living in the Jewish state, while dealing with rather difficult security parameters.

“The fact of the matter is that the only county in the Middle East where Christians have total freedom, and are growing, is Israel,” he said. “Israel cares for its Christians because the Christians are Israelis. They’re Israeli Christians.”

Parsons agrees, saying Israel “has the best record of any sovereign nation of allowing access to holy sites of other faiths.”

“If Israel is preventing access, it is because they have legitimate security concerns,” Parsons added. “Christians in Israel have the most freedom and security of Christians anywhere in the region.”