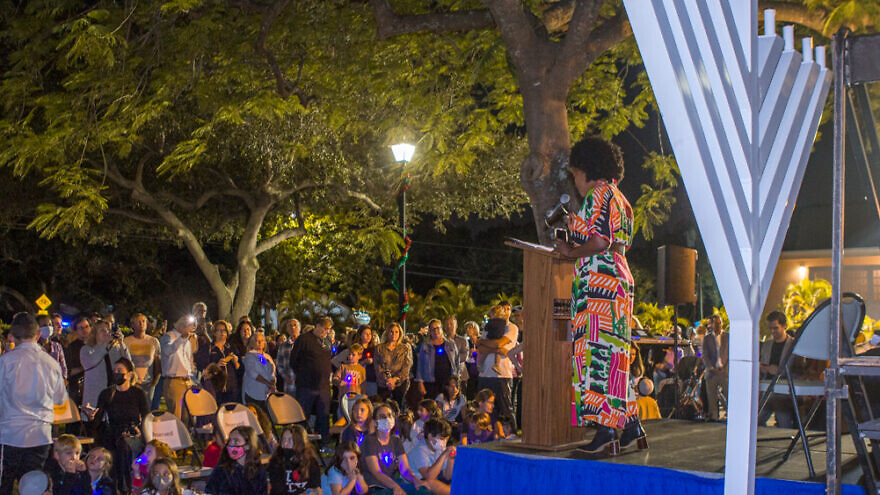 More than 300 people came to a public menorah-lighting on the third night of Hanukkah, sponsored by Chabad of Miami Shores in Florida with the appearance of former Mayor Crystal Wagar (at podium), Nov. 30, 2021. Credit: Courtesy of Chabad of Miami Shores.
Spread the word.
Help JNS grow!
Share now:

(December 6, 2021 / JNS) Eight months after an initial request to put a menorah on public property was denied by a village attorney and a number of local officials, Chabad of Miami Shores in Florida welcomed more than 300 people, including politicians from the village and beyond, to a public menorah-lighting at City Hall on the third night of the eight-day holiday of Hanukkah.

“After years of trying to have Miami Shores join almost every other city in South Florida in having a menorah placed at City Hall, we finally have that experience this Hanukkah,” said Rabbi Asher Sossonko, director of Chabad of Miami Shores. “It is abundantly clear that Miami Shores is a welcoming community for all types of people, including us Jews. It was special to see the light of the menorah finally breaking through the darkness.”

In April, then-Miami Shores Mayor Crystal Wagar had raised the idea of adding a menorah to the village’s winter holiday display, but the idea was nixed by others on the board at the time.

Days later, a new administration was voted in—the election was scheduled before the discussion of holiday symbols—with Sandra Harris becoming the new mayor. The idea of having a menorah as part of the village’s display was later reintroduced and approved.