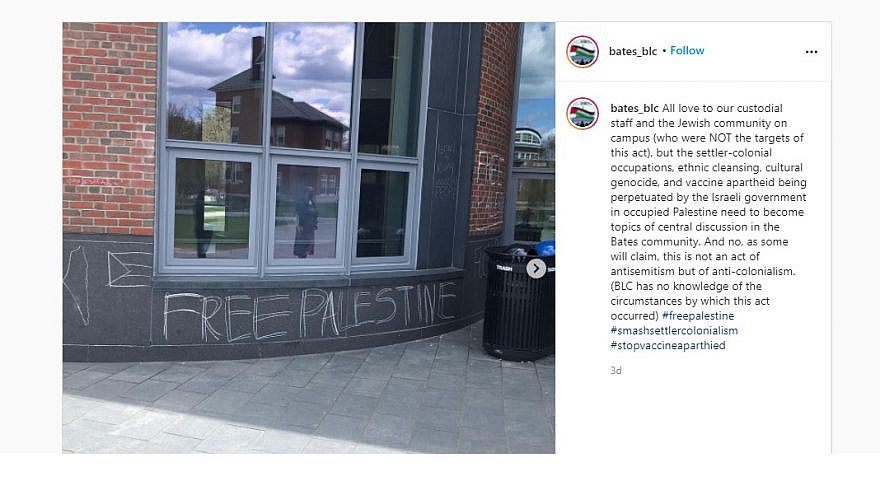 (May 13, 2021 / JNS) Anti-Israel graffiti discovered at Bates College in Maine on Sunday has been referred to the attorney general’s office to be investigated as a possible hate crime.

The coalition did not condemn the graffiti and instead wrote on Instagram: “The settler-colonial occupations, ethnic cleansing, cultural genocide, and vaccine apartheid being perpetuated by the Israeli government in occupied Palestine need to become topics of central discussion in the Bates community. And no, as some will claim, this is not an act of anti-Semitism but of anti-colonialism.”

It added that it has “no knowledge of the circumstances by which this act occurred.”

Bates College administrators contacted the Lewiston Police Department, which arrived at the scene and then informed the attorney general’s office about the possible hate crime, reported the Sun Journal.

Gwen Lexow, the college’s director of Title IX and civil-rights compliance, told students in an email that people have reached out to her “expressing deep concern about the impact of the language contained in the flyers and graffiti, particularly on Jewish members of our campus community.”

She said, “Bates is a community committed to openness, pluralism and inclusion, where every individual should feel safe and supported. Incidents of this kind can have a significant and harmful impact on those who experience them, and since the language appeared, the multi-faith chaplains have met with students individually and in groups.”