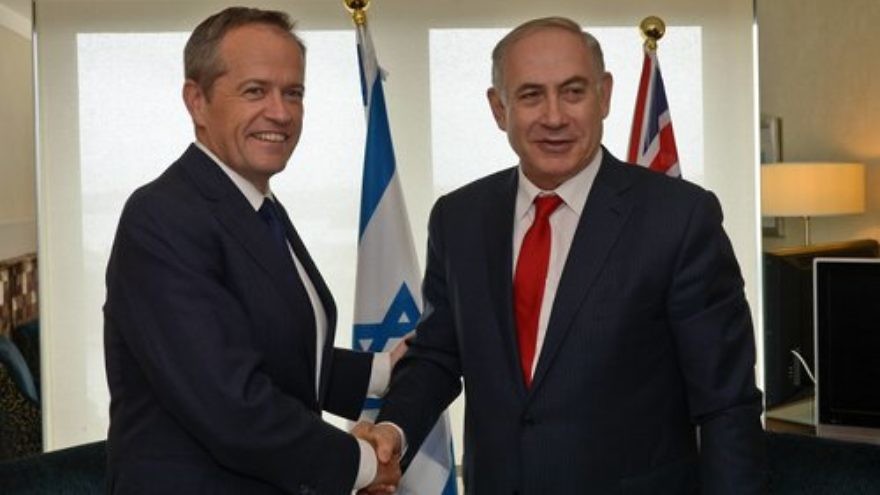 A push for Palestinian statehood recognition within an Australian political party mirrors efforts by left-wing activists in other English-speaking countries to take a harder line against Israel.

“As the oldest, the greatest, the biggest state branch we can’t afford to be stranded in history,” Carr said. “It is time now for another historic shift in Labor Party foreign policy. We must balance our just recognition of Israel with the equally just recognition of Palestine.”

Outside the English-speaking world, China is promoting a four-point plan to end the Israeli-Palestinian conflict and establish an independent Palestinian state.

The motion passed by Australia’s NSW Labor included a clause about the right of both Israelis and Palestinians to live in states with “secure and recognized” boundaries.

Jeremy Jones, director of international affairs for the Australia/Israel & Jewish Affairs Council (AIJAC), said that while international affairs are the purview of the broader Australian Labor party rather than the NSW branch, grassroots supporters of the Palestinian statehood motion are hoping to gain momentum on the issue ahead of Labor’s national conference next year.

“The NSW branch, and other state and territory party units, have adopted resolutions which recommend unilateral recognition of ‘Palestine’ in recent years, which is a change from previous opposition to actions seen to preempt the outcome of negotiations between the parties,” Jones told JNS.org.

Despite having the largest number of seats in Australia’s House of Representatives, Labor has served as the country’s opposition party since 2013. The ruling center-right Liberal party, headed by Prime Minister Malcolm Turnbull, has not indicated a change in its support for a negotiated two-state solution.

Factors contributing to NSW Labor’s Palestinian statehood push include “the personal obsession of Bob Carr, the increasing membership within the party of people presumed to be anti-Israel, a belief in some quarters this policy will endear the party to Muslim Australians and the unpopularity of [Israeli Prime Minister] Benjamin Netanyahu amongst many centrist Labor activists,” Jones said.

Jones added that there is “a solid core of anti-Israel activists, mainly in the party’s left faction, who push for changes of Labor support for Israel as well as a popular perception of Palestinians as victims who should be supported in any way possible by anyone who supports ‘social justice.’”

Following the NSW motion, Australian opposition leader Bill Shorten, head of the Labor party, reiterated his support for the party’s long-held support for a two-state solution.

“If you support a two-state solution, ultimately that includes recognition of Palestine,” Shorten added.

Earlier this year, Netanyahu made the first-ever trip to Australia by a sitting Israeli prime minister. During the visit, Netanyahu met with Shorten, who had been under internal party pressure at the time to raise the issue of recognizing Palestinian statehood with the Israeli leader. Yet in the meeting, there was no reported mention of a Palestinian statehood push, though Shorten did express general support for the concept.

“We want to see Israel safe and secure of its borders. We support the rights of the Palestinian people to have their own state,” Shorten said after the meeting, adding that “[Israeli] settlements and their expansion are a roadblock to peace, that’s damaging to the peace process,” The Associated Press reported.

In an op-ed published in The Australian, Palestinian envoy to Australia Izzat Abdulhadi argued that unilateral recognition of “Palestine” would “solidify Australia’s reputation as a good international citizen and increase its soft power by aligning its position with that of international law, the U.N. and the vast majority of the international community.”

The Executive Council of Australian Jewry said that if acted upon, NSW Labor’s measure “would open the door to a grave weakening of Australia’s traditional bipartisan consensus in favor of, and the [Australian Labor party’s] commitment to, a just and peaceful resolution of the conflict.”

Similarly, AIJAC said that such motions “are problematic and unhelpful to advancing a two-state Israeli-Palestinian peace.”

In his op-ed, Abdulhadi cited a poll by Roy Morgan, a leading Australian market research company, which found that 73 percent of Australians support recognizing Palestinian statehood.

Yet Jones said it is difficult to gauge the views of the Australian public on the issue, since poll questions have been misleading and framed in a way that leads to support for Palestinians’ “right” to a state.

“Anecdotal evidence suggests that most Australians, including most Jewish Australians, are attracted to the concept of an Israeli and Palestinian state, coexisting peacefully,” Jones said, adding that “serious policymakers” within Australia’s ruling and opposition parties do not believe unilateral recognition of a Palestinian entity “which does not satisfy the criteria of statehood” would contribute to Australians’ desired vision for a two-state solution.