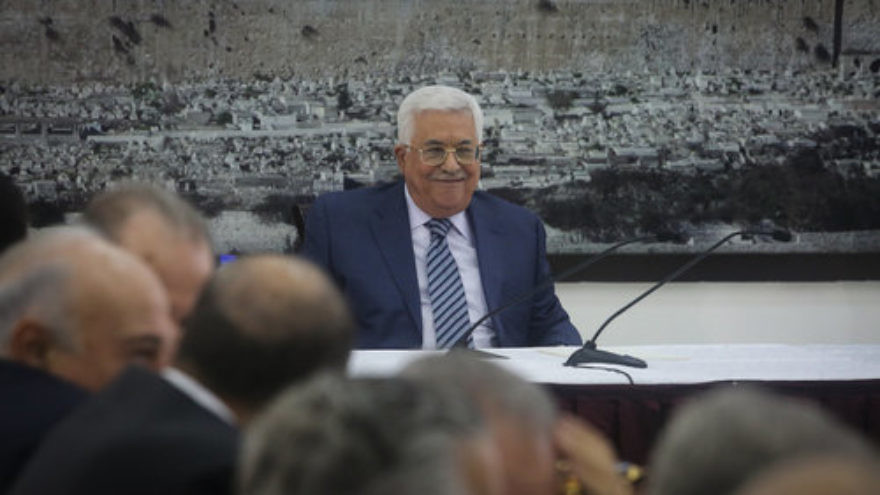 With other major issues in the Middle East such as the Iran nuclear deal taking center stage in recent weeks, two rival Palestinian factions—the terror group Hamas and the Fatah-controlled Palestinian Authority (PA)—quietly announced a reconciliation deal and their decision to form a unity government.

The surprise agreement by Hamas and the PA comes amid an effort by President Donald Trump to forge an Israeli-Palestinian peace deal. Yet it remains to be seen whether the latest attempt at rapprochement by the two Palestinian factions, which have been locked in a sometimes-bloody dispute for more than a decade, will be able to put aside their differences for the sake of unity and what that would mean for the future of the peace process.

Grant Rumley, an expert on Palestinian politics and a research fellow at the Foundation for Defense of Democracies, said he does not expect the reconciliation attempt to succeed in the long run.

“I think the stakes are higher and there is new leadership in Hamas, and that might mean that the two are able to keep up the appearances of reconciliation longer, or play the game of shifting the blame longer, but ultimately the two sides have too much bad blood and divergent ideologies to coexist meaningfully,” Rumley told JNS.org.

More than a decade of resentment

Since violently seizing control of the Gaza Strip in 2007 from the PA, Hamas and Fatah have been locked in a Palestinian version of a cold war. The PA—with the quiet support of Israel, the U.S. and other allies—has worked to root out any attempts by Hamas to undermine or overthrow its control in the disputed territories.

At the same time, Hamas, which has survived a maritime blockade, international isolation, multiple wars with Israel and pressure from other Islamic terror groups in Gaza, has continued to see itself as the sole leader of the Palestinian cause with the goal of destroying Israel.

Despite the deadlock between the Palestinian factions, there have been numerous attempts at reconciliation, most notably in 2014, when they formed a brief unity government that ultimately unraveled amid ongoing disputes over governance.

This latest move towards reconciliation comes after months of economic and political pressure by the PA to squeeze Hamas. This included the PA’s decision to significantly cut its subsidization of Gaza’s electricity bill, which led to severe power shortages, as well as the PA’s decision to stop paying salaries of government workers and former prisoners in Gaza and cutting down on medical border crossings for Gazans.

Rumley believes that while the PA’s pressure on Hamas likely played a role in the latest unity deal, it is not a recipe for long-term coexistence.

“Abbas’s sanctions were viewed by many in Gaza as cruel, depriving them of electricity and medical supplies in a long summer,” Rumley said. “Hamas’s leaders were desperate for any reprieve and outside funding, and to that end were willing to cut a deal with anyone who could get money and fuel into Gaza.”

With the pressure mounting on Hamas as well as Israeli and international concerns about the humanitarian and environmental effects of the cuts, Egypt gathered Hamas’s leaders in Cairo in early September to discuss ending the pressure from the PA and forging a unity deal.

“Egypt’s role is key here,” Rumley said. “It’s one of the few regional actors with enough clout to compel both parties. Cairo views Gaza through the lens of its national security—it does not want another war between Hamas and Israel, nor for Hamas to aid Wilayat Sinai (Islamic State’s Sinai Peninsula affiliate) fighters.”

During the past year, Egypt has been searching for a long-term solution to the situation in Gaza, and has attempted to work with former PA security official and Abbas rival Mohammad Dahlan to ease the situation in the coastal territory. For instance, in June, Egypt cut a deal that was brokered by Dahlan to provide Gaza with emergency supplies of diesel fuel to address the electricity crisis.

“I’m deeply skeptical that Egypt will be able to compel the parties to coexist or share governance of Gaza, but it is nevertheless the key arbiter here,” Rumley said.

For the time being, it appears Hamas is willing to acquiesce to all of the PA’s demands and that the two factions will go ahead with a planned government meeting next week.

“I will go to the beloved Gaza Strip next Monday at the head of the government and with all the bodies, authorities and security services,” PA Prime Minister Rami Hamdallah tweeted.

Rumley said Abbas’s demands “were clear from the onset: Hamas should dismantle the administrative committee, hand over control of the Strip to the PA and prepare for elections.”

Yet after a decade of Palestinian civil strife and Hamas’s wars with Israel, major outstanding issues concerning the terror group remain.

“There are still a number of question marks—most notably the role of Hamas’s military wing—to say with any certainty how far this will go,” Rumley said. “Hamas wants Abbas and the PA administrate Gaza while they control it—a key distinction. Abbas wants their total acquiescence. I don’t see a very large middle section in this Venn diagram.”