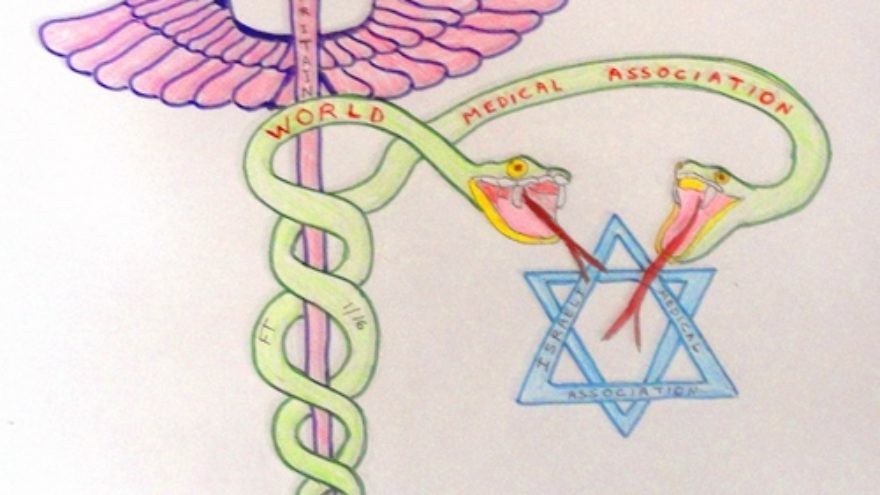 Seventy-one British doctors are the most recent group calling for a boycott of Israel. Last week, they signed a letter to the World Medical Association (WMA) requesting the expulsion of the Israeli Medical Association, alleging that Israeli doctors carry out “medical torture” on Palestinian patients.

Whether they are successful or not, other academic networks seeking to exclude Israeli academics from their associations, such as the American Studies Association, the American Anthropological Association, and others, aim to delegitimize and marginalize Israeli scholars. This is pernicious enough, but in the parlance of the medical profession it does no physical harm.

On the other hand, the expulsion of the Israeli Medical Association from the WMA, by hindering the “funding of research and joint research endeavors,” would slow down and/or prevent future medical cures from reaching not only the Israeli-Jewish population, but also the Palestinian-Arab population as well as the rest of the global population—which, incidentally, includes the boycotters themselves and their friends and relatives in the United Kingdom.

Since these British doctors are proposing a measure that will inflict future physical harm, they are in essence violating the Hippocratic Oath in spirit, and if they get their way, in deed. The oath clearly states: “Whatsoever house I may enter, my visit shall be for the convenience and advantage of the patient; and I will willingly refrain from doing any injury or wrong from falsehood.”

One must assume a very pointed animus of these British doctors through their exclusive focus on Israel as a medical rights violator. Ironically, that focus came almost precisely at the same time that the Israeli Medical Association issued new guidelines instructing paramedics to initially treat the most severely wounded patient at the scene of a terrorist attack, even if that person happens to be the assailant.

It would take mind-staggering inversion to interpret these guidelines as carrying out “medical torture” on Palestinian patients. These new Israeli recommendations are astounding in their strict adherence to medical ethics, above and beyond the standard of care, even to the detriment of their own victimized population. It is doubtful that countries who are not included in this boycott, such as Iran, China, and Russia, could even imagine such guidelines.

As it is eminently clear that these 71 doctors are biased against Israel, and by extension, Jews, who comprise the majority of the Israeli population, and because they have violated the spirit of their Hippocratic Oaths, one must ask: To what extent, and to what depths, are they willing to stoop to further sully their medical ethics? If they feel comfortable with this boycott, how comfortable would they feel treating the objects of their boycott, and to what extent would they treat them equally and compassionately?

These boycotting doctors would most likely be insulted by these questions, and would probably affirm that they would indeed give all the aforementioned theoretical patients equal and outstanding medical care. But with such hatred in their hearts, wouldn’t these patients, if they knew the political inclinations of these doctors, have every right to suspect that these doctors consciously or subconsciously might not have their best interests in mind?

The slippery slope of promoting medical BDS and improper medical care to Israeli and Jewish patients is not so far-fetched. In 2014, a doctor in the Belgian city of Antwerp refused to treat a 90-year-old Jewish woman who had a broken rib. “Send her to Gaza for a few hours, then she will not feel pain anymore,” the doctor told the patient’s grandson. It is likely that this Belgian doctor would be more than glad to sign on to the British boycott.

In 2014, the prestigious British medical journal The Lancet published an “open letter for the people of Gaza” on behalf of 24 signatories denouncing Israel and describing the IDF’s Gaza operation as a massacre. Not only did The Lancet initially resist publishing rebuttal letters, but at the time of the letter’s publication, the Palestinians and the U.N. claimed that 72 percent of the casualties in the Gaza war were civilians. After the dust settled, it became clear that the percentage of non-civilian combatants was closer to 40-50 percent.

Doctors who sign on to Israeli medical boycotts and label Israeli defensive wars as massacres have every right to voice their political opinions. But when their accusations of medical human rights violations are aimed exclusively at one nation, and one people, this same nation andpeople have a right to be suspicious of their motives.

Based on these medical practitioners’ breach of medical ethics and violation of their Hippocratic Oaths, it would be helpful and appropriate to publicize their names so that patients who might cross their paths can perform their due diligence and decide whether or not they want these particular doctors looking after them and their loved ones. In other words, patients have the right to boycott those medical boycotters who cannot be trusted to disentangle their political beliefs and hatreds from their medical acumen and unbiased ethics.

Nathan Moskowitz MD, PhD is a private practice neurosurgeon in Maryland and an assistant professor of neurosurgery at Johns Hopkins University. He is the author of “Kuzmino Chronicles: Memoirs of Teenage Holocaust Survival.”