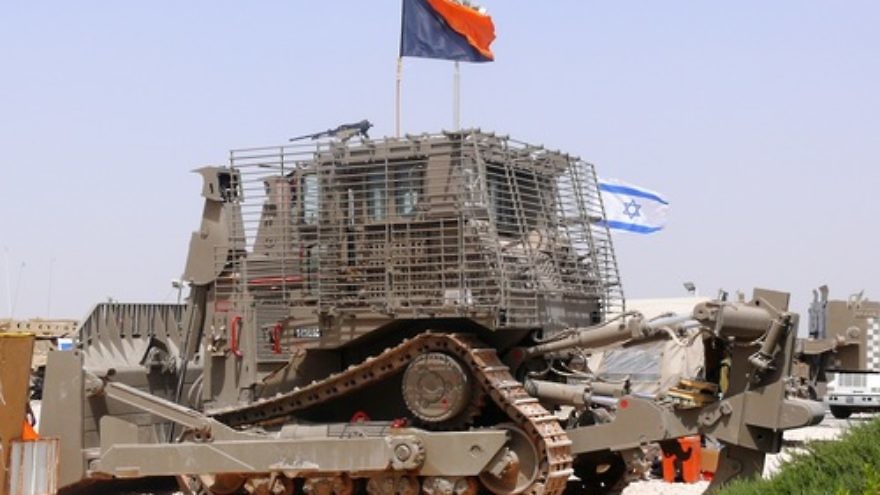 (February 21, 2012 / JNS) First came an entire conference dedicated to boycott, divestment and sanctions (BDS) at the University of Pennsylvania. More recently, the Presbyterian Church approved a report calling for divestment from three companies because of their sales to Israel. All in all, February has seen the anti-Israel BDS movement gain significant steam.

On Feb. 17, the General Assembly Mission Council of Presbyterian Church USA decided to receive a report from the Committee on Mission Responsibility Through Investment (MRTI), including a resolution recommending that Caterpillar, Hewlett-Packard (HP), and Motorola Solutions “be placed on the General Assembly Divestment List until such time as they have ceased profiting from non-peaceful pursuits in Israel-Palestine.” The recommendations will now go before the church’s 220th General Assembly, set for June 30-July 7.

From Feb. 3-5, a national BDS conference at Penn armed was an anti-Israel training ground for college students, including sessions such as “The Economics of Israeli Occupation” and “Connecting with Grassroots Palestine,” with the stated goal of “touching on every aspect of the multifarious global effort to heed the BDS Call and bring an end to Israel’s system of oppression, segregation and dispossession.”

Don’t think BDS activity within the church and on campus takes place in respective vacuums, said Ethan Felson, vice president of the Jewish Council for Public Affairs (JCPA) and the organization’s expert on divestment.

“When we take a look at the pro-BDS groups in the churches, they all were reporting on the Penn BDS conference, and the campus BDS movements are looking closely at what’s happening in the churches, each eager to trumpet a success of the other,” Felson said during a Feb. 14 conference call with reporters.

The recent growth of BDS hasn’t been limited to Penn and the Presbyterian Church within academic and religious spheres. At its quadrennial General Conference in April, the United Methodist Church will also consider a resolution to divest from Caterpillar, HP, and Motorola. At Harvard University, it won’t be surprising if BDS is a hot topic at a March 3-4 conference on the “One State Solution” to the Israeli-Palestinian conflict. Paul Beran, a noted BDS activist, chairs the outreach center of Harvard’s Center for Middle Eastern Studies.

“Imagine the impact of a debate for divestment at a university, where they are able to say that the Presbyterian Church sold its shares in Caterpillar because of its work on Israel,” Felson said. “Imagine somebody going up in front of a city council and saying the Methodist Church, which is the largest mainline church in America with 7.5 million members, [supports BDS]. There is something pernicious to this. These churches actually are groups that have skin in the game, and Palestinian Christians are asking them to do this, so it is a place of greatest likelihood, and it is the toehold that folks have been looking for in the delegitimization movement with the divestment tool.”

The recommendations that will go before the Presbyterian General Assembly include a renewal of“the call of previous General Assemblies to all corporations doing business in the region to confine their business activity solely to peaceful pursuits, and refrain from allowing their products or services to support or facilitate violent acts by Israelis or Palestinians against innocent civilians, construction and maintenance of settlements or Israeli-only roads in East Jerusalem and the West Bank, the Israeli military occupation of Palestinian territory, and construction of the Separation Barrier as it extends beyond the 1967 ‘Green Line’ into Palestinian territories.”

JCPA’s approach to counter BDS is to take advantage of its relationships at the grassroots level, Felson explained, partnering with the Jewish Federations of North America’s Israel Action Network, the Jewish Community Relations Council, and members of the church community. The goal is to have meetings with Presbyterian and Methodist church delegates going into major conferences and to discuss shared goals for peace, Felson said.

Asked if resolutions at the upcoming church conferences will cover the persecution of Christians in Iraq, Egypt, and Syria—or instead, focus solely on the alleged plight of Palestinian Christians—Felson said Israel will remain at the top of the agenda.

“[Israel] is the big focus, the Christians in [Iraq, Egypt, and Syria] do not want American Western Christian involvement,” he said. “They don’t feel it would help them. [However], the Palestinian Christians are saying ‘shout out for us.’”