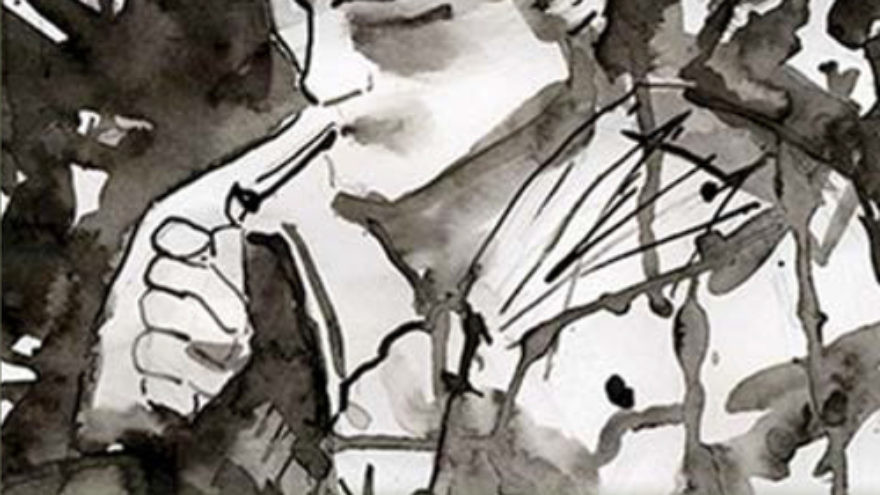 (November 10, 2013 / JNS) There is a golden hour in Tel Aviv when Israelis relax after work and tourists are inspired. The sun is setting. The sky and sea light up. That’s the hour when the characters and scenes from my book, “This Year in Jerusalem,” replay in my thoughts. Suddenly I am in my element, introducing myself to strangers and asking them to consider purchasing a copy.

“Do you like reading in English?” I ask in Hebrew. We pick a language to converse in and I show the book. The stories are loosely based on my experiences as a kibbutz volunteer in the south of Israel in 2009-10, I explain. The collection charts the divergent paths taken by two best friends who suffer a falling-out over a girl. All of the short stories connect, leaving readers with the impression that they have read a short novel. Additionally, beautiful Indian ink and acrylic illustrations by an Irish artist, Diana Muller, accompany each episode. A signed copy costs 40 shekels.

Books are markers in a writer’s life. Now that I’ve returned to Israel, I’m often nostalgic for my time as a kibbutz volunteer. Back then my fiction was raw, but I was urgently aware that I was in the midst of a defining experience. My manuscript was a scrapbook of conversations, images, and moods.

“It was the spring of my life,” Myles, the first-person narrator, says in the title story, “This Year in Jerusalem,” a tale about homesick travelers celebrating American Thanksgiving in Israel. The stories are all fiction, but for me, this line rings true. My year in Israel was a great awakening for me, spiritually and as a writer.

After graduating from Cornell University in 2008, my only plans were to travel and write. I spent a summer driving cross-country in the United States. When I landed in New York City later that fall, the U.S. credit crisis was spiraling out of control. Steady work was elusive. I crashed on friends’ couches, ate horribly, and walked everywhere to save subway fare. By spring, I was working four different menial jobs daily to stay afloat. A spiteful reality, New York was inspiring, but I was too exhausted to write creatively. My dream was on hold.

I had to get out, but didn’t know where to go. The possibility of moving abroad was appealing. Kibbutz volunteers, though an increasingly forgotten breed, still enjoy one of the best opportunities to experience Israel. In exchange for their work in diverse fields, they receive room and board, as well as a small stipend for personal expenses. Not a bad gig for a starving artist. I scrounged up $200 to reserve a spot through the Kibbutz Program Center, and booked a one-way ticket.

The last weeks in New York were a blur. I worked hard to save money for the trip, said difficult goodbyes to friends and family, and shoved a dozen applications to graduate school into the mailbox so that I would have options if I wanted to return. Somehow, I managed to squeeze in a visit with my rabbi, Scott Glass, in Ithaca, NY.

Having disappeared from Jewish community life in the years after my bar mitzvah, I know he was surprised, though pleased to hear from me.

“Isn’t that a rule? You have to see your rabbi before you go to Israel,” I joked, setting us both at ease. Then I outlined the book I wanted to write.

At the core of my initiative were questions about my Jewish-American identity. I’d been caught off guard when a close friend hurt me deeply with an anti-Semitic remark, and for the first time in my life I doubted my connection to mainstream American culture. I was curious whether Israel would feel like home and determined to document the experience honestly.

From a literary perspective, I was also responding to a classic memoir by Amos Oz, “A Tale of Love and Darkness.” Oz’s descriptions of the conflict between the Sabra Jews who settled in Israel before World War II and the flood of refugee Diaspora Jews who arrived in the wake of the Holocaust shocked me. Diaspora Jews were considered weak lambs led to the slaughter. They were an unpleasant burden for the strong and self-assured new Israelis to shoulder.

“Are American Jews in the same category as Diaspora Jews?” I asked Rabbi Glass. “I’m interested in the questions of dual citizenship and national loyalty that being Jewish outside of Israel poses, especially for American Jews.”

“For me, Israel always comes first,” Rabbi Glass asserted. But he was careful not to impose his perspective. In short, he wished me luck and let me know that he would be curious to read the book.

Award-winning Israeli author Eshkol Nevo recently told me in an interview for JNS.org that his writing process is “like throwing a stone in water.”

“The stone is biographical,” Nevo said. “The ripples are fiction.” In the aftermath of my conversation with Rabbi Glass, I threw a similar stone and boarded the plane.

The ripples of my first plunge into Israeli society led to my first published work of fiction. When I sell my books on the Tel Aviv boardwalk today, however, I sometimes wonder if my rock dissolved in the water more than it splashed. I haven’t made aliyah, but I met my Israeli wife here and I have made many new friends in Israel. I’ve become immersed in the culture. My continued interest and personal connection to the country is as inspiring as it is assured.

Bestselling Israeli author David Grossman explained to me how he relates to his work after its publication. “I do not regret any book I’ve written,” he told JNS.org. “The time may come when I will stop writing. Then I will look at all the volumes and know that they reflect a time and or situation in my life. It’s how I know where I’ve been.”

For now, I am my own agent, blazing my own trail. My improvised book tour through Europe and Israel is adding unpredictable chapters to my memories surrounding this volume. I don’t always look backwards, but maybe that’s a sign that I’ve thrown another stone.

Jeffrey F. Barken frequently reports on Israel news topics and Jewish-interest literature. A graduate of Cornell University and the University of Baltimore’s MFA in Creative Writing and Publishing, he is the author of “This Year in Jerusalem,” a collection of stories based on his experiences living on a kibbutz in Southern Israel from 2009-2010.

Part of the JNS.org special section on Jewish books.