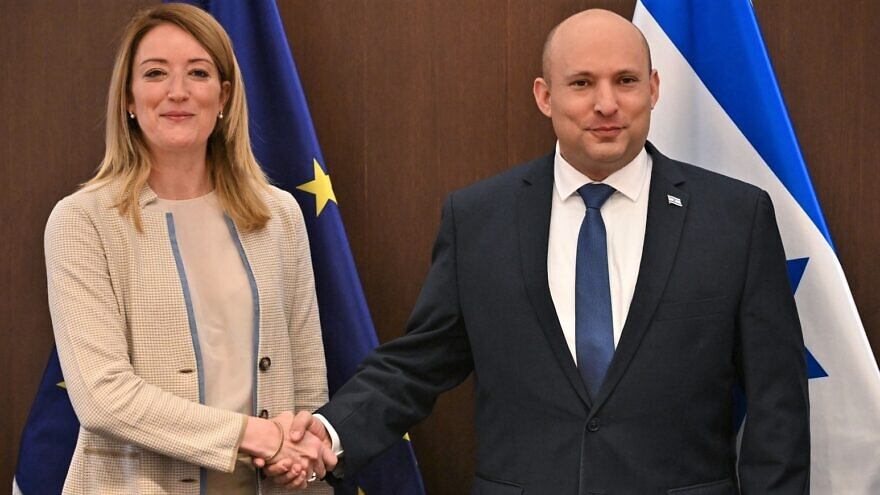 “The Prime Minister welcomed the president on her visit to Israel, her first official visit outside Europe, and expressed gratitude for her speech in the Knesset plenum yesterday, and for her strong stand against anti-Semitism and terrorism,” said the Prime Minister’s Office.

The two leaders exchanged views on the implications of Russia’s ongoing war in Ukraine and the need to combat incitement. They also emphasized the importance of closer cooperation between Israel and the European Union in several areas, especially food security and energy, the statement continued.

Knesset member Shirly Pinto, Israel’s first deaf parliamentarian, told Metsola about the steps the government is taking to integrate people with disabilities into society, including legislation approved on Sunday legislation allocating 2 billion shekels ($595 million) for helping integrate the disabled into the wider community. Pinto also advocated for increased cooperation between Israel and the European Union on this issue.

Bennett said “our relations have seen ups and downs in the past, but from here on, we will work together only on ups. The European Union and Israel have the potential for a marvelous friendship.”

Metsola began her trip to Israel on Sunday with a visit to Tel Aviv University and the Yad Vashem Holocaust Remembrance Center in Jerusalem.

After her visit to TAU, Metsola tweeted that she had been impressed by “the engagement, the questions and ideas put forward by students.”

During her tour of Yad Vashem, Metsola visited the “Flashes of Memory” exhibit and took part in a memorial ceremony in the Hall of Remembrance, as well as the Children’s Memorial.

Prior to her arrival in Israel, Metsola had criticized a decision by Israel to ban European Parliament member Manu Pineda, a Spanish Communist politician and chairman of the European Parliament Delegation for Relations with Palestine, who has called for a boycott of Israel.