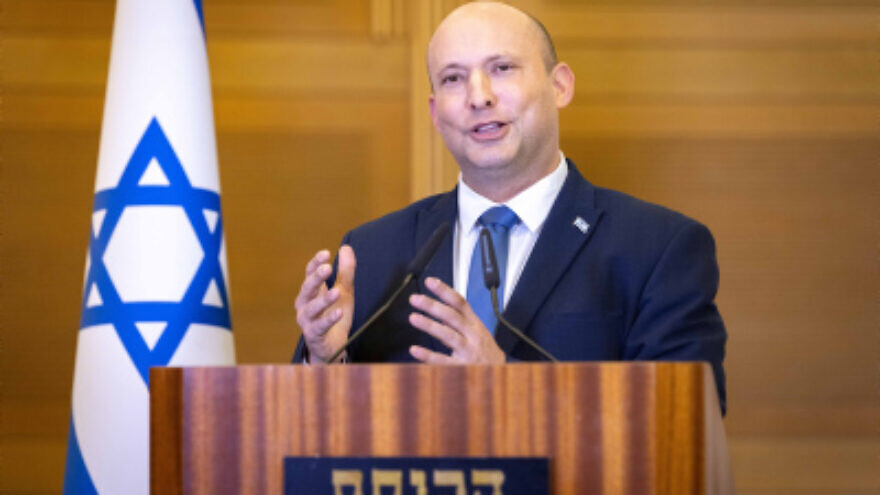 Then-Israeli Prime Minister Naftali Bennett holds a press conference at the Knesset, announcing he will not be running in the next elections, June 29, 2022. Photo by Olivier Fitoussi/Flash90.
Spread the word.
Help JNS grow!
Share now:

(September 7, 2022 / JNS) Only Israel Defense Forces commanders will decide the rules of engagement for Israeli soldiers, and they will do so irrespective of any internal or external pressure, Alternate Prime Minister Naftali Bennett tweeted on Wednesday.

“This is the truth: At any given moment there are Palestinian terrorists trying to murder Israelis. Not the other way around. Our hand is not easy on the trigger, but the moral imperative is to hit the terrorists, thereby saving lives,” Bennett said in the tweet.

“As prime minister, I provided full support for our warriors, and I expect our friends in the world not to preach morality to us, but to support us in our war on terrorism,” he added.

On Tuesday, State Department Deputy Spokesperson Vedant Patel said Washington will press Israel to review its rules of engagement after the IDF released the final findings of its investigation into the shooting death of Palestinian-American Al Jazeera journalist Shireen Abu Akleh.

The report concluded that there is a high possibility that she was unintentionally hit by IDF fire.

“We will continue to press Israel directly and closely at the senior-most levels to review its policies and practices on this to ensure that something like this doesn’t happen again in the future,” Patel said, according to Reuters.