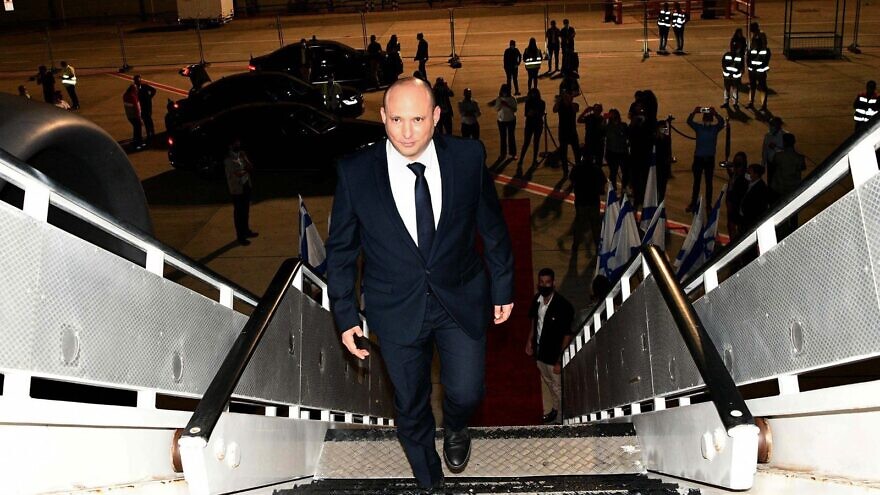 (September 26, 2021 / JNS) Israeli Prime Minister Naftali Bennett arrived in New York Sunday, a day before his scheduled speech at the U.N. General Assembly. It is always helpful for an Israeli leader to travel abroad on the tailwind of good news. Although there was a military incident overnight Saturday in which four Hamas terrorists were killed and Palestinian Authority leader Mahmoud Abbas, in a pre-recorded video address to the U.N. General Assembly on Friday, demanded that Israel return to its pre-1967 borders or face consequences, Bennett still landed in the U.S. with at least two feathers in his cap.

The first is the failure last week of the small, but vocal, anti-Israel “squad” in Congress which attempted to prevent $1 Billion in funding for Israel’s Iron Dome missile defense system.

Addressing reporters before boarding his flight, Bennett noted the “sweeping victory” in the U.S. House of Representatives, which passed a standalone bill to provide $1 billion in funding for the Iron Dome missile-defense system, after a group of Democratic lawmakers forced the removal of that provision from a larger bill.

“At the moment of truth, we saw the representatives of the American people overwhelmingly support Israel, 420 to 9, in the vote on rearming the Iron Dome,” Bennett said. “There is a small anti-Israel group that makes a lot of noise, but these people failed.”

The second feather for Bennett, was an unprecedented public call last week by over 300 prominent Iraqis to forge a full peace agreement with Israel.

To many experts and pundits, this demonstrates that over a year later, the Abraham Accords have proven their worth and stability as well as showing promise for the future forging and strengthening of ties between Israel and its former enemies.

Bennett tweeted his support for the normalization of ties between Israel and Iraq, writing, “This is a call that comes from below and not from above, from the people and not from the government. The state of Israel is extending its hand to you in peace.”

It is noteworthy, however, that Iraqi Prime Minister Mustafa al-Kadhimi formally rejected the call for peace with Israel, stating his public support for the Palestinians.

‘We deal with security through actions’

Regardless, Bennett will be riding on the tailwind of these developments and he will likely aim to differentiate himself from his predecessor, opposition leader Benjamin Netanyahu.

Bennett will deliver his speech to the U.N. on Monday morning and his spokesperson has announced that he will not use props or imagery as Netanyahu has done in the past.

According to a source in the prime minister’s entourage in New York, Bennett’s core message with regard to Iran is that “we deal with security through actions. Speeches are important, but this is the time to act.”

While Netanyahu’s main speechwriter was former Israeli Ambassador to the U.S. Ron Dermer, Bennett decided to write his own speech, with some assistance from his staff and advisors.

“It was important to him that the speech be in his voice and reflect what he thinks as accurately as possible,” the source in his entourage explained.

Bennett will not directly respond to Abbas’ threats and instead will aim to highlight Israel’s successes, emphasizing the need to view Israel through a different lens that does not always include the Palestinian issue.

According to the same source, Bennett is “trying to present his authentic feeling as policy that for 73 years, Israel’s place in the world was all about the conflict, and that is not healthy. Making us siamese twins with the Palestinians is wrong and unhelpful. They will not be a major part [of the speech]. Relations with other countries will not be defined by them.”

The prime minister is also expected to meet with U.N. Secretary-General Antonio Guterres and U.S. Ambassador to the U.N. Linda Thomas-Greenfield, and will speak at a Jewish Federations of North America event.