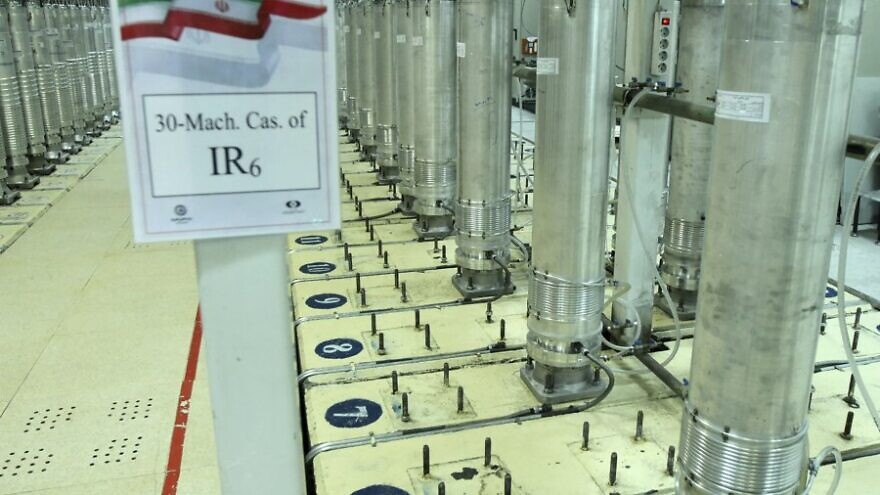 (June 12, 2022 / JNS) If the West does not stop Iran’s nuclear program in its tracks then the mullahs will soon get the bomb, Israeli Prime Minister Naftali Bennett told The Telegraph in an interview on June 11.

So, where do negotiations stand and how close is Iran to crossing the nuclear threshold?

In March, efforts to revive the Joint Comprehensive Plan of Action (JCPOA), more commonly referred to as the Iran nuclear deal—from which the Trump administration withdrew in 2018—appeared within reach. “Our view is that we are close. We have been close for some time now,” then-White House spokesperson Jen Psaki said on March 10.

Then negotiations stalled. On April 4, Iran announced it would not send representatives back to Vienna to continue talks with counterparts from Britain, France, Germany, Russia, China and, indirectly, the United States.

Efforts to revitalize the process hit a low point when, on June 8, the International Atomic Energy Agency (IAEA) condemned Iran over its failure to explain traces of uranium at three undisclosed sites.

The next day, Iran denounced the resolution as “political” and “unconstructive,” and IAEA director-general Rafael Grossi revealed that Iran had removed 27 of the U.N. watchdog group’s surveillance cameras from nuclear sites around the country (about 40 remain in place). Grossi said at a June 9 press conference that Iran’s move posed a “serious challenge” and could constitute a “fatal blow” to the prospect of resuming negotiations.

Grossi also informed IAEA members that Iran intends to install two new IR-6 cascades (a series of linked centrifuges that enrich uranium) at its Natanz nuclear facility. “An IR-6 centrifuge spins uranium 10 times as fast as the first-generation centrifuges that Iran was once limited to under its 2015 nuclear deal with world powers,” according to the Associated Press.

Iran has already been operating nearly 100 IR-6s at its Fordo underground nuclear facility, the IAEA reported.

Some Israeli officials believe the West has given up on an agreement. Eytan Gilboa, professor of political science and a senior fellow at the Jerusalem Institute for Strategy and Security, told JNS: “The West concluded that Iran is not interested in a deal and that the negotiations, as some of them suspected, were designed just to buy time in order for Iran to continue with its nuclear project at an accelerated speed.”

Others are less confident that negotiations are at an endpoint. Eyal Zisser, vice rector of Tel Aviv University and a lecturer in its Middle East history department, said that the IAEA resolution should not be interpreted as a sign that the West has given up on talks.

“I would argue that there is no immediate connection,” he told JNS. “The IAEA is a professional organization. These are not politicians. It could be they’re trying to put pressure on Iran, or they’ve come to a point where they can’t handle it and figure it’s better to leave it to the U.N. Security Council or the United States.”

He said it’s impossible to know whether recent events signal a disintegration of negotiations or simply an effort by both sides to gain leverage. “The negotiations are not new, we’re speaking about the last decade. Iranians leaving and then coming back—it’s part of their tactics,” Zisser said.

Eyal Pinko, an expert on Israeli national security and intelligence and a researcher and lecturer at Bar-Ilan University, is convinced Iran is playing the long game. “In every negotiation, you want to create some crisis in order to get better results,” he said.

Pinko told JNS he believes that Iran and the West will reach an agreement because both sides are keen for a deal. The Europeans want access to Iranian oil and to penetrate Iranian markets, and Iran wants to free itself from economic sanctions. “Europe sees a lot of opportunities in Iran and Iran is losing a lot of opportunities in Europe and with other economies. The population in Iran is starting to feel hungry and they’re protesting, and the Iranian leadership has a lot of internal problems as a result,” Pinko said.

“Europe is pretty much occupied with the Ukrainian war,” he added, “but in the next few months, one to three months, they will go back and revive the negotiations with Iran.”

Iran considers itself in an excellent position, Pinko said, as it views Europe as “desperately” in need of fossil fuels and the United States as vacillating.

“In Muslim culture, if you’re not demonstrating power, you’re weak,” he said, providing several recent examples of America’s failure to act. He noted, for example, the five Iranian oil tankers sent to Venezuela despite U.S. warnings. The tankers arrived without interference and unloaded some $45 million in oil and other products between May and June of last year.

“America did nothing. It’s like the Biden administration is threatening via Twitter. Iran, the Russians and the Chinese are seeing this as a source of weakness,” Pinko said.

How close to a bomb?

Israel has been advocating for concerted action against Iran for years, warning of the danger of a nuclear-armed Islamic Republic to the entire world. Other countries in the region share that view, including the United Arab Emirates, whose leader invited Bennett to his country for a meeting on June 9 that observers say was driven by concern over events surrounding Iran.

Most recently, Bennett told The Telegraph, “Without pressure from the West, the Islamic regime in Iran could get their hands on a nuclear bomb very soon. The world must take a firm stance … Iran’s nuclear program won’t stop until it’s stopped.”

Israeli Defense Minister Benny Gantz on May 17 confirmed that Iran has 60 kilograms of uranium enriched to 60%, about double the 33 kilograms the IAEA reported in March. According to the Wall Street Journal, Iran would need about 40 kilograms of 60%-enriched uranium “to produce enough weapons-grade nuclear fuel for a weapon.”

“It can take Iran 12 weeks to three months once it makes the decision,” University of Tel Aviv’s Zisser said of Iran’s current position.

Pinko agrees that Iran already has the capacity to build a nuclear weapon, especially when considering an IAEA report from May 2021. “It said that they have the full capabilities for enrichment to a military degree,” he said.

Noting that Iran is receiving help from China and North Korea, Pinko postulated that “they have the full capacity for the bomb, including the missiles to carry it and the weapon system to operate the nuclear warhead. They’ve had it for at least one year. This is my assessment.”